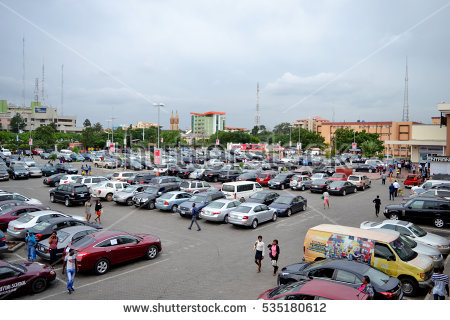 As a centre of economic activity in Nigeria, Lagos experiences heavy influx of businesses and rural-urban drift. The continuous inflow as it has its advantages also comes with some challenges. These challenges if not well managed may pose a great threat to the peaceful living of residents of the state in near future and the attainment of mega city status in the state government plan. One of such challenge is the issue of parking spaces that has been a source of nuisance for free vehicular movement and also partly responsible for traffic gridlock in the state.

Very many years back, most of the buildings in the Lagos metropolis are built with expanse land enough for garage or parking space for their visitors. Developers even ensured some houses are planned to have gardens and recreation areas for residents. However, with the number of people trooping into the state, developers see every little available space as an opportunity to increase their principal’s income. Most places erected for commercial purposes make little or no provision for parking space. In some cases, the spaces available that could serve as parking spaces are used to accommodate mobile shops. Healthy living of the inhabitants is been replaced for economic benefits.

Schools, churches, mosques and event centres are erected in the heart of the city with little or no arrangement for parking and leisure spaces. This constitutes a great nuisance to the society as the only option left for those who patronize the aforementioned becomes road sides and major streets. It has become almost a regular scene on weekends to see roads half-blocked all because of events going on at different event centres in the city. This road side parking has led to minor accidents. Very often the residents are left to suffer the pain of delay of appointments as they are held in a position due to “artificial road-blocks” caused by unorganized parking on the side of the road.

If it were only private property developers that has failed to provide parking spaces, it would have been a little of a problem. Inability of the government to have massive parking space in its development plan has left most road users to the mercies of street boys. The street boys extort money from those who use the road side and harass those who may refuse to pay. They refer such as “owo ile” which translates the money for the land. And one is left to wonder who handed over the land to them. In some cases the owner of the vehicle may be very unlucky as such parked vehicle may be gone without any trace. Lagos has been on the fast lane when it comes to infrastructural development; however less has been seen in the building of mega parks which can be maintained by the state to ensure security and orderliness within the metropolis. To have a truly developed state, there must be a total plan.

The Lagos State Traffic Management Authority, LASTMA, have also been exploiting this inadequacy by preying on residents who manage to park by the road side in the absence of where to park. Some citizens lament how to survive in such a situation where there is no provision made and there is a need to park. The LASTMA personnel have only used this as an avenue to rake in some money into their personal pockets. Heavily patronized market places within the metropolis are left with little or no spaces to park their vehicles.  Residents are scared to make use of the little spaces available not to run into the hands of the LASTMA officials who are ever ready to tow the vehicle.

Absence of public parking lot has led to increase in the activities of hoodlums who derive pleasure in picking pockets. Commuters and pedestrians have excessively narrow roads to struggle with since vehicles are parked on both sides of the roads. This in no doubt is a very big contribution to gridlock that the state experiences. As much as road side parking could be condemned, it is almost inevitable when there is no legal alternative provided. If the government makes provisions for parking spaces there will be justification to prosecute the offenders.

If this is not quickly attended to, then, there may be a serious problem in the next 50 years for residents. The population of Lagos surpasses that of Cairo in size in 2012 to become the largest city in Africa and 8th fastest growing city in Africa. The population of Lagos state currently is put at 17.5 million according to the state government. It has been predicted that by 2050, Lagos’ population is expected to double, which will make her the 3rd largest city in the world. These statistics should bother the government in relation to providing amenities that is sustainable. The infrastructural developments are good but without convenient parking spaces, the roads may soon become the only option and lawlessness will be the dominant order.

It becomes very important for the state government to come up with a policy aimed at addressing the development of parking spaces in the state. In line with the state’s public sector transportation management system, the policy should enforce property owners and developers to make adequate provision for parking spaces; most importantly structures used for commercial purposes and located at strategic public locations.

The state government herself should also invest more in development of public parking lot.  There has been several road projects commissioned by the current administration, but not so much heard about the ongoing Onikan multi-purpose car park which has been on since 2014. So also is the Campbell street, Lagos Island parking lot. There is a need for the government to see how this is inevitable to development plan of the state.

Parking spaces should be erected close to market places, major bus stops and strategic locations in the state such as stadium, central business districts and inner streets. The parks can be managed by a division under the state’s Ministry of Transport. By extension, more jobs will be created. Affordable fees should be charged; this way there would be an increase in the internally generated revenue (IGR) of the state. With the increasing population of Lagos, this will sure be of great economic benefit.

There is an urgent need to address enforcement of policies that will ensure development of parking spaces by developers in the state as well as the state government doing likewise. It will increase the peaceful living and well-being of the inhabitants and also make the state easy to do business the more. If she would want to attain that height of a true mega city by 2025, this should start now as a part of the plan.

Jonathan made mistakes, but Buhari is a...