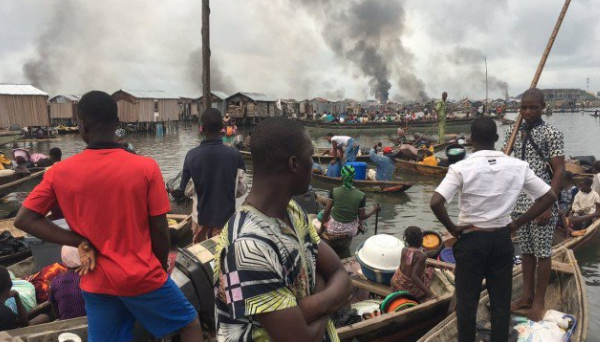 A resident of Otodo Gbame, a riverine community in the Lekki area of Lagos state, was allegedly shot dead during a demolition exercise by men of the state’s task force on Sunday.

According to the Justice and Empowerment Initiatives (JEI), a non-governmental organisation, a stray bullet hit Daniel Aya, who was rushed out of the scene, but died hours later.

The organisation shared pictures of residents who were fleeing the community as a result of government’s action.

In a series of tweets, hundreds of  the evictees were seen leaving the shambles of what used to be a haven of safety through canoes.

Some of the fleeing residents were trapped on water, as men of the marine police in the team of the task force, prevented them from going back to the land.

The state government had on March 17,  forcefully evicted the residents of the said community and demolished the houses, leaving thousands of people homeless and helpless.

The government had defended its action, saying it was done to forestall disaster.