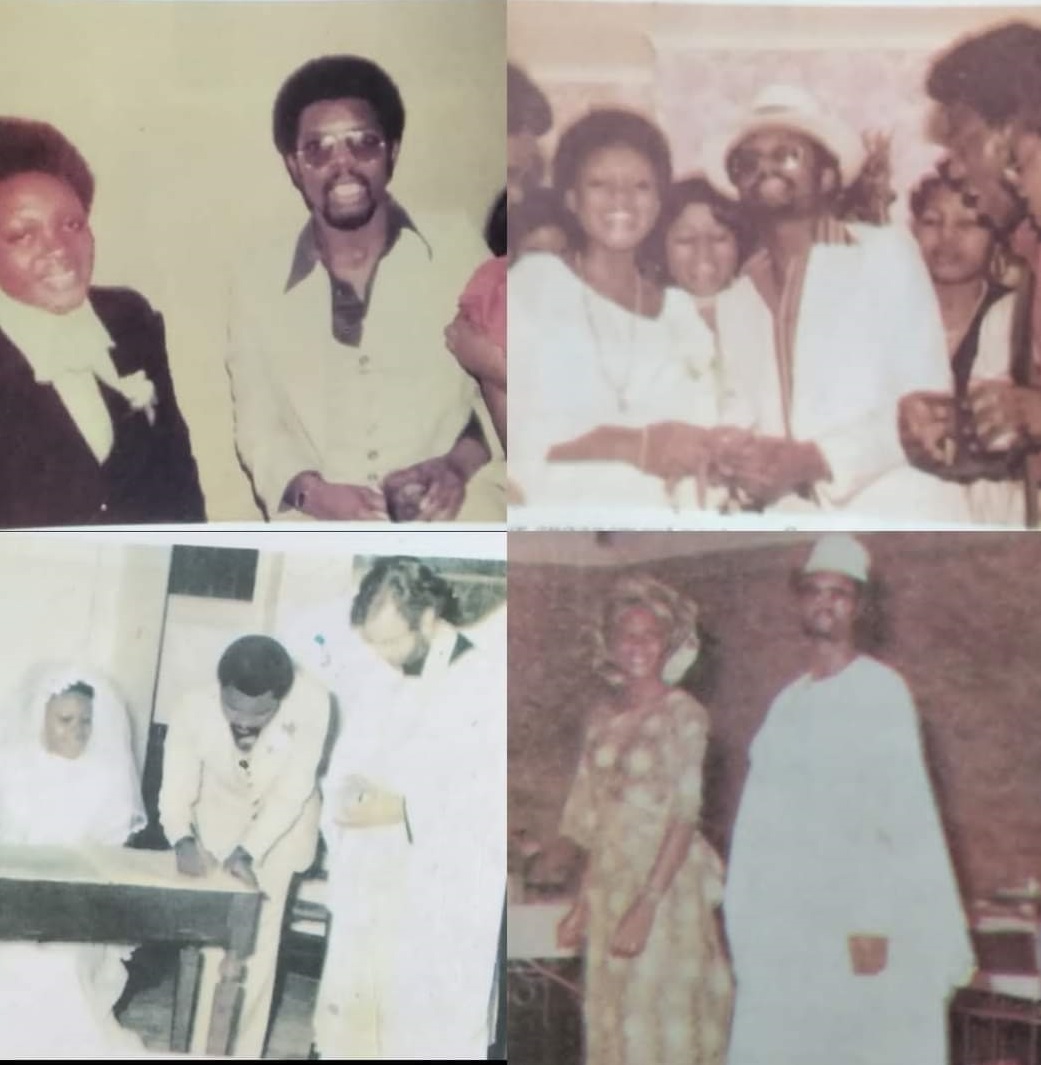 Today, Thursday,12th August 2021, we celebrate our 43rd wedding anniversary. Solemnised on Saturday,12th August 1978, at the Saint John’s Wood Anglican Church, Hampstead, Lord’s Roundabout, London, NW8, United Kingdom, our wedding service was officiated by the Reverend John Rankin. The best lady was Bioye, Tokunbo’s younger sister, now Mrs. Odusina, while my best man was Femi Akeredolu, now late. We both entered African Church Grammar School, Apata-Ganga, Ibadan, Western State, as freshers in Form One in 1964. He was my best friend. May his noble soul continue to rest in perfect peace. Amen.

When we celebrated our 30th,35th, and 40th wedding anniversaries in the same church, it was the same Minister, the Very Reverend John Rankin, though retired, who officiated.
My wife,Adetokunbo,nee Laditan from Ilaro,Yewaland,Ogun State of Nigeria,whose late mother,Mrs Amelia Mopelola Laditan,nee Osho,from Kudeti Quarters,Ibadan,Oyo State,and I,Oloye ‘Lekan Alabi,Ekefa Olubadan of Ibadanland,from Ile Oye,SW2/486,Isale ‘Jebu,Ibadan,met as students in London in 1977.
She had, one day during Winter in 1977, visited her friend and schoolmate, Miss Tutu Olanipekun, later Mrs. Aigbogun, now late, who was my flatmate at 82, Prince George Road, Stoke Newton, London, NW 16. Tutu, was out the day Tokunbo visited, and a gentleman that I have always been, she eventually accepted my clean-minded(God was, is still, my witness) pleas to her to enter the flat from the biting winter winds outside. That day,a male flatmate from Benin was holding a birthday party in the flat. He had told us to ignore the persistent ring of our doorbell by an unknown visitor, assuming it was a gatecrasher at the entrance door.

When the doorbell kept ringing,I, known for always keeping to protocols, decided to answer it. On opening the door,I saw a ravishing beauty shaking from the biting cold. I let her in and when she asked of our flatmate, Tutu, her friend,I told her she was out.I invited Tokunbo to join the ongoing party, but she was rather brash when she turned down my kind invitation(I was the MC at the party and God knew my heart was clean), snobbishly saying that she didn’t set out of her house for a party. At first, she gave me a false name, Miss Tokunbo ‘Williams’, when I volunteered to take her message for Tutu. After giving me a false name, she hurriedly left our flat. And I thought to myself that, “look at someone I wanted to help.”Help as in help.

Days after,I saw Tutu and delivered Miss Tokunbo ‘Williams’ message to her. Tutu burst into huge laughter that her visitor-friend had lied about her surname to me, saying: “Don’t mind Tokunbo. She is Miss Laditan”.I felt offended.
Weeks after her first visit, Miss Tokunbo ‘Williams’ visited again, and I was also home again. What a coincidence!When she revealed her true name because I had refused to open the door for her this time. She apologised for misleading me, saying she lied about her name because of the notoriety of London boys with ladies.I told her I wasn’t a London boy, but an Ibadan gentleman. After her apology, she revealed her true name as I insisted that the goods kept in my care by Tutu, who had returned to Lagos, were not hers. I gave her back by telling her that her friend, Tutu, did not leave anything for Miss ‘Williams’, but rather, Miss Laditan! She admitted being the Miss Laditan. After apologising for giving me a wrong name on her first visit,I, ever the true gentleman, eventually opened the front door for her. Which man would not?

I invited her into my room, served her hot tea, as it was still in winter and eventually released the goods to her.I called my Asian friend cab driver and even volunteered to escort her to her residence, at Turnpike Lane, even though she refused me entry after I had offloaded the goods into her flat. The eyes of men see a lot.
Weeks later, I visited her residence again, lying to her that I was ‘visiting’ an ‘auntie’ living in her neighbourhood. Again, she shut the door in my face! As persistence brings rewards in the end, to genuine helpers like me, she, one day, let me into her flat. We kept to her Greek landlord’s order that his 10-year old daughter stays with us. I accepted my fate and kept on praying to God to open the way for me. One day, on her return from her older brother, Folarin, in Birmingham, where she had spent the Christmas holiday, she returned my many unanswered telephone calls to her, she honoured my invitation to visit my residence. The rest, as they say, is history. But,I admit, it was a long battle before winning her heart.