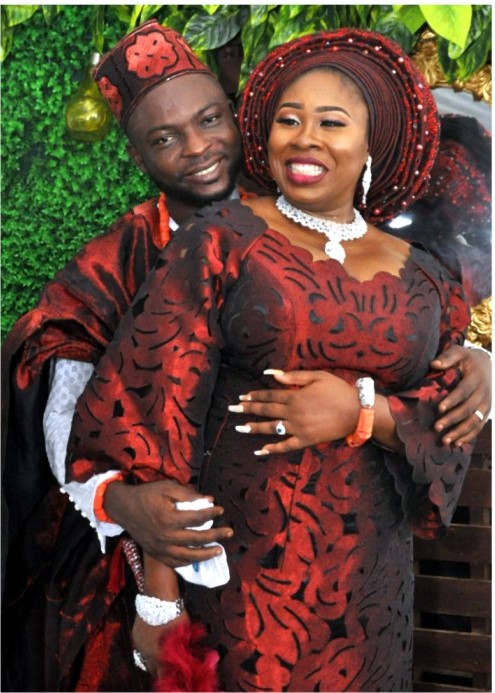 Zaidat is the daughter of a popular ex-Lawmaker, Hon. Ganiyu Oladunjoye Hamzat, who got married to a top socialite lady, Alhaja Huriwat Bolatito Hamzat. Alhaja Bolatito is one of the happening celebrity babes on the social scene today, and that was why the centre was thronged by beautiful society women, who are parties delight any time, any day. That was the experience when beautiful Alhaja Bolatito gave out her daughter’s hand in marriage.

The party attendees were 80 per cent women, why? First, Alhaja Bolatito apart from being a socialite is the wife of a powerful man in society today, and she also has many friends across an ethnic and religious divide.

Almost all the women spotted the Aso-Ebi because the party was more or less a show of class. The celebrity women are the life and soul of any party because with women, you can be sure of having unlimited fun. These sets of women are big-time textile merchants.

Some are into haulage businesses, some are upward-mobile career women in top places, some are commissioners, wives of top politicians, while others are behind some money-spinning companies.

They cherish to look good and that was what happened at the party as most of them stepped out in their best attire. One significant thing about all of them, besides wearing a uniform, was that their necks did all the talking with expensive jewellery which was either diamond or gold.

Alhaja Hurinat Bolatito Hamzat stole the show with her dressing which matched her look and a dazzling bead jewellery that was complemented with beautiful silver shoes and purse. Sighted also was her sister. She wore the same attire with Alhaja and stood by her throughout the event. The duo stole the show as they were the cynosure at the party.

Most of the women looked beautiful in their uniquely sewn Aso-Ebi styles. Some with spotted skirt and blouse of the Aso-Ebi and complemented it with a simple, but nice jewellery.

One thing about this classic party was the carriage and charisma of the beautiful babes that was attention catching because their styles that were really unique.