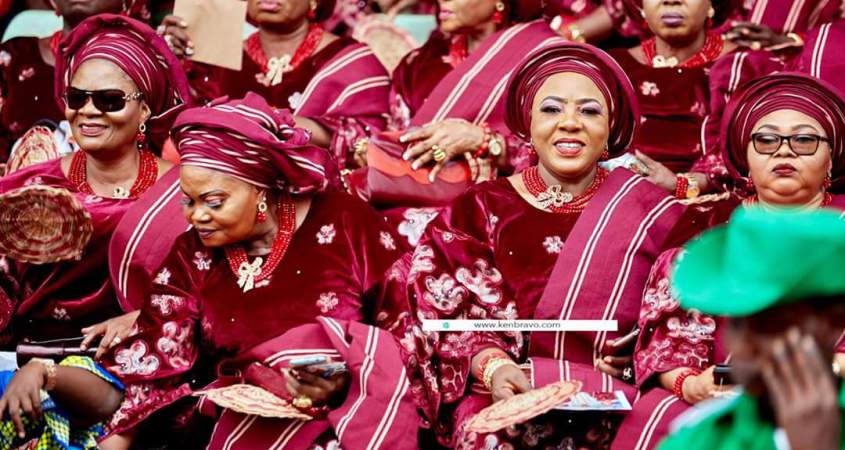 Ojude-Oba 2018 may have come and gone, but as usual, it was not devoid of its own side attractions. This year’s festival was not only grand, glamorous and colourful, it was also celebrated with extreme pomp and pageantry. The display of matching colourful cultural attires by people of various age groups also added glamour to the event.

As expected, many age grades were dressed in unique beautiful attires while many female celebrity women made fashion statements in their uniform attire. One thing that stood some of the female Regberegbes out is that, many of them rocked matching shoes, matching jewelleries, same make-up and same headgear styles while they all came out to display dance amidst singing and drumming.

Many of the age grades make sure that some of their friends also come to witness the historical event in unique attires. While we were busy appreciating many of the female age-grades fondly called Regberegbes, the two Queens of Olori Sikiru Adetona, Olori Iyabo and Olori Kemi Adetona walked in. They were part of the early callers at the 2018 Ojude Oba. Olori Iyabo, who is the first wife of Oba Awuajale doesn’t  look her age at all. Though she is in her early 80s, she looks many times younger. She was spotted in burnt orange attire matched with same monotone headgear.  What about the junior wife, Olori Kemi? She walked in like an angel at few minutes past 10am. The tall “Ayaba“ who is in her 50s, was adorned in an 18carat jewelry kept talking every time she moved.

While we were busy appreciating how the Awujale Queens dazzled, Mrs Yetunde Onanuga, the Deputy Governor of Ogun state, stepped in. Her husband is Otunba Biodun Onanuga, the Giwa of Bobakeye. She was there in her capacity as the representative of Ogun Governor. Of course, she never walked alone, she shone like a star with Mrs Funmibi Oduwole Adebayo, the wife of Ijebu-Ode Local Government Chairman.  Hon Oduwole, who is a top member of Egbe Bobakeye. Funmi runs the popular Rostal flowers decor.

Guess what happened when Otunba Afolasade Risikiyat Adunni Adesoye walked into the pavilion where 2018 Ojude-ode was held? The elegant wife of Otunba Adegboyega Adesoye, the “Iya egbe“ Arobayo is one of the top Awujale Otunbas. She stood out elegantly in a special green HOH Lace with her best friend, Mrs Morufat Shabi. Though they rocked same luxury Lace but we spotted the mother of all diamonds on their neck. It was a silver and coral diamond set. Of course, it was not strange to see Adunni Risikiyat rocking one of the rare diamonds, because of her line of business. Among friends of Alhaja Sade Adesoye who dazzled with her are Alhaja Sekinat Stevens, Alhaja Bukola Alli Balogun, Mrs Bimbo Pitan and popular Mother of Music act, LAX MUM.

At few minutes past 12pm, a black luxury Benz S550 series car rode straight into the pavilion and many couldn’t wait to see the beautiful woman behind the tinted glasses. Behold, it was the beautiful wife of the Senate president. Though she looked quite simple in Iro and Buba but still, her skin glowed throughout the event.

We haven’t told you about tall, sexy Mrs. Balogun, one of the Deroot sisters. Though she doesn’t belong to any age grade but this classy woman shone in a burnt Orange HOH lace matched with Orange headgear. Her elder sister is the Iya egbe of one of the age grades.

Let’s take you through how the female Regberegbes stole the show at 2018 Ojude Oba. For many of them, it is not just about what they wear, their choice of jewellery also matters.  It took many of them over 10 months to decide on what to wear, where to buy, which jewellery to choose and with which shoes to match.

One female that many haven’t stopped taking about till date is Egbe Bobamayegun Asiwaju Obinrin, who won the first prize at 2018 Ojude-Oba. They are the age grade between 1974/75/76. Their colour was simply unique with the combination of Champagne Gold Buba and Majenta Iro Aso-oke. They were led by their Iyalode, Kemi Popoola Anchor. It comprises of 100 beautiful women who run good businesses. Their shoes and purse also complimented their attire for the massive event. Do you want to know why they won? They had a traditional attire called “Olode Marun“. This is an ancient way of dressing where the wearer wears headgear, and use Iyun bead as jewelry on hair, neck, and legs. You will also use another aso-oke on your arms. You tie your iro and also tie another ipele on it. It is ancient and this made them stand out from many of the Regberegbes. Their Iya Egbe, Alhaja Ibilola Solaja Jumlar, the oil magnate and top rice dealer in Daleko market and their Baba Egbe, Asiwaju Olajide spared no cost to make sure they look good at 2018 Ojude Oba.  Among many of the their members were Yeye Sokoya Bukky, Yeye Yetunde Rasak, Hassan Joke Namako, Olugbede Adesunbo, Olugbedu Adesimbo, Okanlawo Sunny, Rasidat Quadri, Osimorin Kikelomo, Adesewa Anifowose, Bukola Balogun, Toyin Ogundipe, Yemi Soyemi , Onanuga Iyanu, Rasheedat Odusanya, Okanlawon Simi, Alhaja Obasa Salewa, Kolawo Opeyemi Bidemi Ogunjobi, Ayinke Soderin,   Tawa Ogunfuye, Omolola Owoyele, Ayomi Ladejobi, Balogun Toyin Elizabeth, bolaji okusi, Dupe Okusi, Sola Adekoya and many others

Just like their names, Egbe Jagunmolu Obinrin Stainless(1965-1967) looked ever so beautiful at 2018 Ojude Oba. Though their Iya egbe, Alhaja Amudalat Stainless wasn’t sighted during the parade but her age grade stunned many in their attire too. They were clad in torquise velvet lace matched with a yellow headgear and a matching yellow purse and shoes.  Alhaja Mosun Kay, Alhaja Abukia Akanke, Adeyinka Ajenifuja, Alhaja Fausat Ailere, Alhaja Omowunmi Adebanjo, Abiola Lawal Adetutu, Princess Adetoun Macaulay were among many sighted at this year’s Ojude oba.

Though this age grade are in their 70s but they know the rudiment of fashion and spared no cost to make sure they were noticed. We are talking about Egbe..Obaleke Obinrin(1944 TO1946).which comprises of rich ijebu business women. They were clad in special luxury sequence Lace matched with yellow and turquoise headgear.. Their Iyalode is Ronke Olowu. Other members are Alhaja Busura Alebiosu, Bewaji Kuku, Bola Owoduni Tinubu, Ronke Olowu Alausa, Sola Adaranjio, Jumoke Yussuf, Doyin Ayanbadejo, Bintu Osibo to mention few.

If there is any Regberegbe who didn‘t let others outshine them, at 2018 Ojude Oba, it is Egbe Gbobaniyi Obinrin. Their cobalt blue aso-oke made them look unique. They also rocked unique eye glasses that added to their beauty. They had matching shoes, purse, and jewellery too. Ebony pretty Iyalode Adebukola Osinbajo was the one who led them at the parade. Their Aso-oke was supplied by Princess B fabrics store. Olukorede Adeyefa, Funke Olugbile, Woleola Iyabo Amoo, Tope Awosanya, Jumoke Sadiq, Sola Olorungbebe, Rotimi Alakiu Shittu, Olabisi Edu, Basirat Okusi, Kudirat Quadri, Rasheedat Iberu, Toyin Sanni, Bimbola Alatise, Kehinde Yusuf, Bose Obe, Bukola Osifowora,  were among many who stole the show at 2018 Ojude Oba.

Last on the list of female celebrities who dazzled at 2018 Ojude Oba is Egbe Arobayo Larotex  who are those between the age grade of  1968/ 1970. They were in orange buba and multicoloured aso-oke as wrapper. The Iyalode Bisola Abatan was with the Otun Baolanle Basherah Yekeen, Abiodun Akinlabi, Tope Onabule, Adeola Tijani, Islamiyat  Fasina, Joke Adesnaya, Adijat Ogundana, Fareedah Ayomide and many others.

How We Achieved Stability In KADUNA House Of Assembly •HARUNA INUWA, Majority Leader