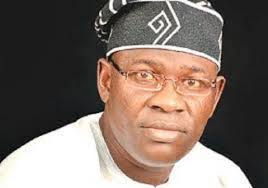 Oyo State Government on Monday announced that the Speaker of the State House of Assembly, Rt. Hon. Adesina Micheal Adeyemo, will be buried at his residence in Lanlate Area of the state on Thursday, May 3, 2018.

The State Commissioner for Information, Culture and Tourism, Mr. Toye Arulogun said that the  Service of Songs for Hon. Adeyemo, who died on Friday, April 27, 2018 after a brief illness, will hold on Wednesday, May 2 at Oke Ado Baptist Church, Oke Ado Ibadan by 4pm.

He said that there will be a Special Session and Lying in State at the House of Assembly Complex on Thursday by 8am and the Motorcade leaves for Lanlate thereafter for the Funeral Service at New Garage Park, Lanlate Oyo State by 12noon.

Prior to his position as Speaker, he was Deputy Chief Whip of the House, member of Fund Allocation, Works and Transport, Agriculture, Trade and Investment, Appropriation and Public Finance committees of the 7th House of Assembly.

He was a member of the Nigerian Bar Association (NBA) and the International Bar Association. He also served in the executive committee of the Ibadan branch of the NBA as an Auditor and Assistant Secretary.

Dignataries from all walks of life across the country are expected at what Arulogun stated will be a state burial for the late Speaker who is survived by his wife, children and aged parents