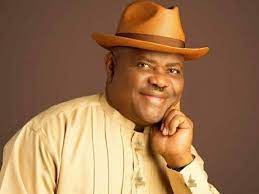 Peoples’ Democratic Party youths in the Southwest have urged the leadership of the party to pick the River State Governor, Nyesom Wike as vice presidential candidate come 2023 elections.

The group was convinced that Wike’s choice will be a perfect arrangement that would put the party in good stead to wrestle power from the All Progressive Congress in 2023.

In a statement in Ado-Ekiti signed by the Convener of Southwest Youths Coalition (SWYC), Com. Akeem Adebomojo said Wike remains the best material to take PDP  to a resounding victory in the 2023 presidential polls as the Vice Presidential candidate of the party.

“There is no gainsaying that Governor Wike has done excellently well in Rivers State such that he has been able to relegate the APC to the precipice which the unfortunate party really belongs.”

“Aside the fact that Rivers State is religiously PDP, the unprecedented, admirable and sterling performance of Governor Wike has endeared the hearts of many Nigerians to the ‘general’ of the PDP and placed the South-South as a stronghold of our great party.”

How To Avoid Being Caught By The...