PETER ODILI’s Loyalists Rally Round Him @ 74 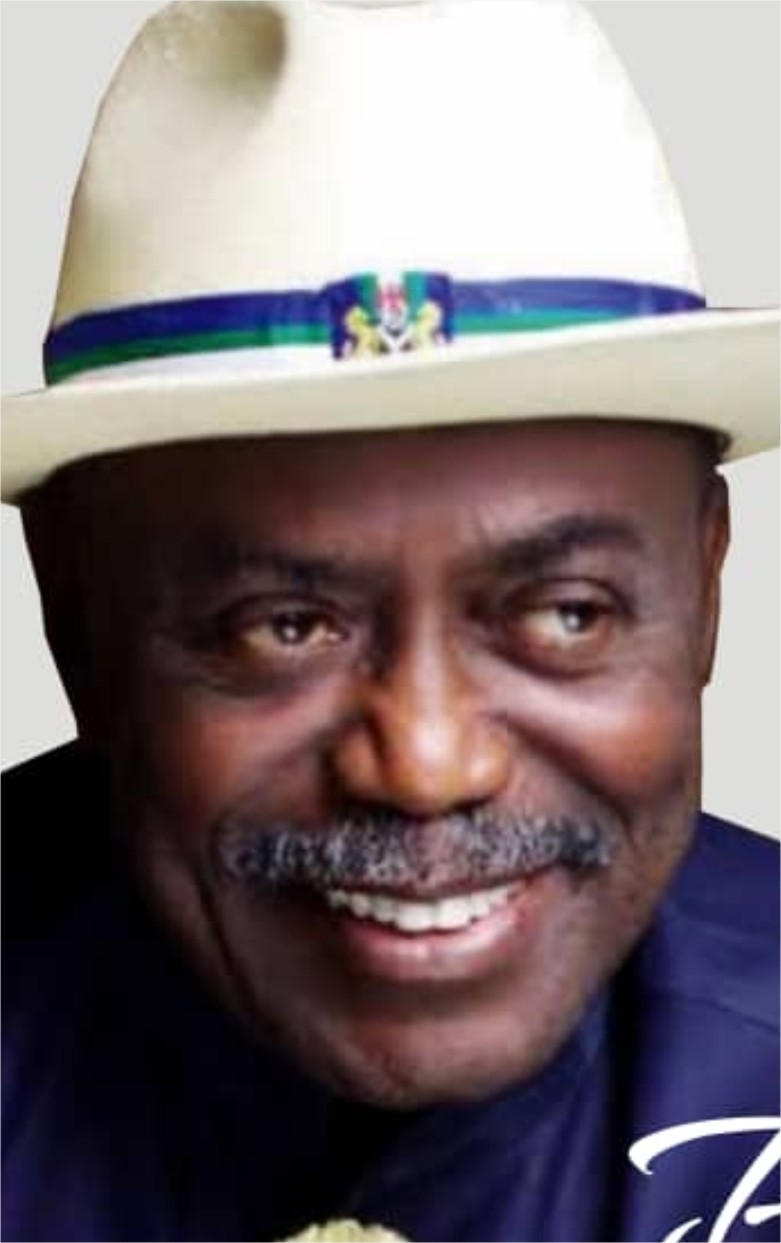 On 16th August 2022, a former Governor of Rivers State, Dr. Peter Otunaya Odili, celebrated his 74th birthday. Many of his political associates and staffers took to daily newspapers and broadcast media to celebrate their political godfather, who made them what they are today. He mentored and politically groomed many of them in Rivers state on national development.

City People’s Bureau Chief, EMEKA AMAEFULA –(+234(0)8111813069)-here takes a look at the list of those who Peter Odili has made and those who worked in his 8-year administration in Rivers State, domestic staffers are not left out.

The outgoing governor of Rivers State, Nyesom Ezebunwo Wike, is a political son of Dr Peter Odili as he was nominated and voted Chairman of Obio/Akpor Local Government Council in 1998/1999. He was in office until 2002 when he completed his first term but also returned for a second term that ended in 2006. Wike, during the 74th birthday of retired Justice Mary Ukaego Odili, wife of Dr Peter Odili, confessed that his second term in office as Chairman of Obio/Akpor LGA was facilitated by the retired Justice Mary Odili, who intervened to have his name restored as a candidate.

He took over the Rivers State chairmanship of the People’s Democratic Party-PDP-when in 2002, the late Dr Marshall Harry, who was Rivers State Chapter Chairman of PDP got elevated to South-South Chairman of the PDP. But with the defection of the late Dr Marshall Harry to the All Nigerian Peoples Party (ANPP), Prince Uche Secondus contested LGC in Rivers State and had a landslide victory, which earned him, the sobriquet “Total Chairman”. He remained a loyalist of Dr. Peter Odili until the State incumbent governor, Wike, ousted him from the office of the national Chairman of PDP. Wike’s action was not unconnected with his bid to contest the Presidential Primary election of the PDP which he lost to Alhaji Atiku Abubakar.

He is one of the politicians Dr Peter Odili groomed during the time he was Deputy Governor under Chief Rufus Ada George’s administration. Barrister Celestine Omehia was appointed Commissioner for Education, while he was a Law Lecturer at the Rivers State University of Science and Technology Nkpolu Orowurokwo, Port Harcourt. In 1999, he was appointed Special Adviser on Special Duties where he took care of developmental schemes, including Christian Pilgrimage matters. In 2007, however,  Celestine was nominated as a substitute to Chibuike Rotimi Amaechi as Governorship candidate and he won. On the 25th of October, 2007, he was thrown out by the Supreme Court of Nigeria that restored the political mandate to Chibuike Rotimi Amaechi, who is Omehia’s cousin. The incumbent Governor Nyesom Wike recognised Celestine Omehia as a former Governor of Rivers State. His entitlements were thus restored.

The former Deputy Speaker, House of Representatives, Chief Austin Opara, came into the political limelight when he won election into the House of Representatives as the candidate of Port Harcourt Federal Constituency2. His emergence as Deputy Speaker was a handiwork of the political sagacity of Dr Peter Odili as the Governor of Rivers State whose political influence was overwhelming during that dispensation. Today, Austin Opara remains relevant in the political equation of Rivers State. He had aspired to be Governor but failed.

This Ikwerre-born administrator is an Atiku Abubakar’s political ally as he is working hard for Atiku Abubakar in the upcoming Presidential election on the 25th of February, 2023.

The cool-headed Wakrikese- born and trained Medical Doctor at the University of Lagos Dr Abiye Promise Sekibo, was Secretary to the State Government (SSG) during the administration of Dr Peter Odili, from 1999 to when he was appointed Minister for Transportation during President Olusegun Obasanjo’s administration. He had tried unsuccessfully to be elected governor of Rivers State, but later defected to Action Congress of Nigeria-ACN- he later returned to the Peoples Democratic Party-PDP.

A former National President of Nigerian Bar Association-NBA-OCJ Okocha is a good lawyer whose towering reputation has earned him much respect. During Dr Odili’s tenure, he enjoined much political relevance. He was made a member of various Ad-hoc committees in that administration probably because his wife hails from Ndoni Peter Odili’s hometown in Ogba/Egbema/Ndoni LGA.

He was appointed Special Adviser on Infrastructural Matters during the administration of Dr Peter Odili before he was elected into the House of Representatives for Okrika-Ogu/ Bolo Constituency. Today, he has been twice elected  Senator representing Rivers East Senatorial District.

Engineer Desmond Akawor has remained in the political space of Rivers State for long. He graduated from Federal Polytechnics, Bida in Kogi State. He became Director at the federal capital development Authority, Abuja. Later he joined Dr Peter Odili’s administration where he played major roles. During Chibuike Rotimi Amaechi’s administration, he was visible too and headed the Greater Port Harcourt Development Authority. He continued in office when  Nyesom Wike emerged as Governor of Rivers State in 2015 to date. Now, he is Chairman of PDP in Rivers State.

The Etche Rivers State-born politician-cum-businessman has remained one of the founding fathers of PDP in Rivers State, He is a member of the Elders Forum of PDP. His two children have held political offices. First, Charles Anyanwu was elected into Rivers State House of Assembly, representing one of the two Etche State constituencies and later chairman of Etche Local Government Area.

Today, his son, Mr. Obinna Anyanwu, is in his second term as Chairman of Etche LGA.

This erudite Senior Advocate of Nigeria-SAN-Henry Odein Ajumogobia was appointed Commissioner for Justice and Attorney-General in Rivers State, by Peter Odili until he was appointed by Chief Olusegun Obasanjo. Today, he sits as a Non-executive Chairman of First Petroleum Exploration company with Aliko Dangote as one of the consortium investors. He is a specialist in Aviation litigation.

She was a Permanent Secretary, and later Commissioner in Rivers State. She acquired a Doctoral degree from the United Kingdom in Microbiology. Today, she has been nominated a Running Mate to Siminialaye, PDP’s Governorship candidate for the 2023 election.

The Go-Round Community Non-Governmental Organization’s founder, Brother Felix Obuah, hails from Ogba/Egbema/Ndoni Local Government Area where Dr. Peter Odili comes from. During Odili’s tenure, he was elected Chairman of Ogba/Egbema/Ndoni LGA and later elected Chairman of PDP in Rivers State through a Supreme Court Judgment that affirmed him Chairman of PDP in 2012 prior to the 2015 governorship election in Rivers State. Governor Nyesom Wike appointed him the Sole administrator of Rivers State Waste Management Agency-RIWAMA. He aspired to become Governor of Rivers State in 2022, but only garnered 2-votes at the Governorship Primary election. He heads a Seventh Day Adventist Church.

The Ogoni-born politician turned businessman has been the Managing Director of the new Tiger head Company that handles various developmental projects, while Dr Peter Odili was Governor of Rivers State. He was elected Senator, representing Rivers South East and in 2022, he aspired to become Governor of Rivers State, but was unsuccessful,

She was a former Commissioner for Women Affairs. The Bonny Island-born politician, Mrs Toru Ofili, has been in Rivers State politics for a while and her contribution to mobilizing Rivers State women in politics has been well appreciated especially during Dr Peter Odili’s administration. She held a cabinet office and later when Nyesom Wike came on board in 2015, she was appointed Special Adviser on Millennium Development Goals-MDGs.

This former personnel of the Federal Government Security Agency, who was later a member of the Federal House of Representatives from Ondo State worked with Dr Peter Odili. During Chibuike Rotimi Amaechi’s tenure, he left and later joined the Government as the Sole Administrator of Rivers State Waste Management Agency-RIWAMA.

He came at a time Dr Peter Odili was setting up his innermost political structure, the Restoration family, in 1998 and till today, he remains one of the Rivers State’s most successful and hardworking politicians. He has brought dividends of democracy to his people. Under Dr Peter Odili, he was appointed Commissioner for Education and in the second term of that administration, he was re-appointed Commissioner for Sports. Chibuike Rotimi Amaechi appointed him Chairman, of the Senior Secondary Schools Management Board. Today, Chief Allwell Onyesoh is a candidate for PDP’s Rivers East Senatorial seat in 2023 election.