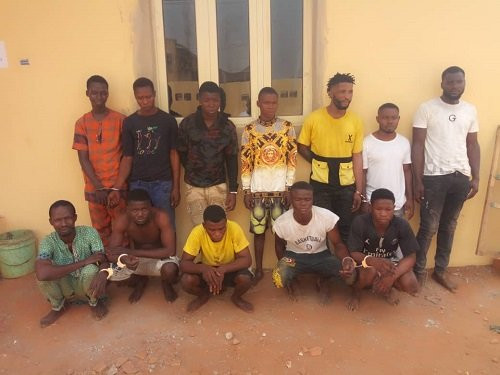 The Lagos state police command have arrested 17 persons for cultism and gang related violence at Ikorodu and Ijora Badia areas of the state.

According to a statement released by the command’s spokesperson, Bala Elkana, the suspects from Ikorodu were apprehended in the early hours of today while those picked up at Ijora Badia were nabbed Friday afternoon during a cult war.

Bala in the statement said members of the Aiye and Eiye cult groups had engaged themselves in supremacy tussle at Iso Isu, Ajegunle, freely brandishing cutlasses and axes. The fight which lasted several hours, left many of the participants with various degrees of injuries.

According to the police spokesman, operatives from Ijora Badia Division and the Special Strike Force on Social Miscreants from the Command Headquarters, Ikeja were mobilised to stop the fighting and restore peace to the area.

“Five suspects were arrested. The suspects are Olaniyi Abiodun, 21, Emola Kamal, Muritala Gbadeyanka, 18, Kadiri Bashorun, 28, and Adebayo Ebiesuwa, 25. They belong to Aiye and Eiye confraternities. Then, around 11am on February 23, Ikorodu Police Station received an information that members of Aiye and Eiye Confraternities attacked each other at Ladega and one Lateef Ganiyu Akinpelu, 24, alias Eti was seriously injured.

Police operatives from Ikorodu Division, Area N, Shagamu Road, Ipakodo, RRS and SARS were mobilised to the scene. The injured person was rushed to General Hospital Ikorodu where he is currently receiving treatment. Twelve suspects were arrested including Ajayi Ibrahim, Isiaka Abdullah and Yusuf Balogun. One locally made pistol was recovered. Investigation is ongoing and all the suspects will soon be charged to court” Elkana said in his statement