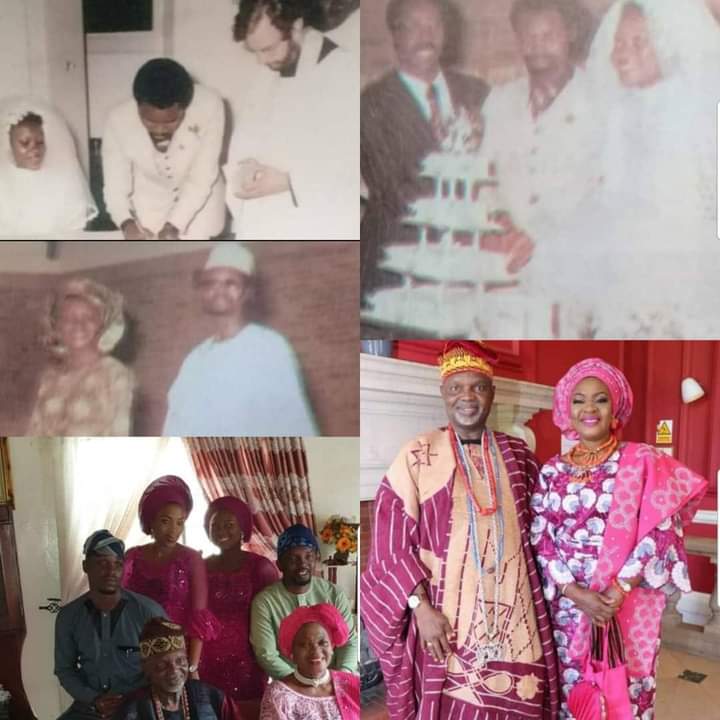 Today, Wednesday,12th August 2020, is the 42nd anniversary of our wedding that took place on Saturday, 12th August 1978, at the Saint John’s Wood Anglican Church, Lords Roundabout, Hampstead, London NW8, Great Britain. The Minister who officiated was the Reverend John Rankine. Our wedding reception held at the Church Hall and was chaired by the Nigerian High Commissioner to the United Kingdom and Ireland.

My wife, former Miss Adetokunbo Laditan, daughter of the late Chief Abraham Adejumo Laditan, Seriki of Ilaro, Ogun State of Nigeria and the late Mrs Amelia Mopelola Laditan, nee Omotoso of Kudeti Area, Ibadan, Oyo State, had been told in her youth by her paternal grandmother that she would get married in the United Kingdom. Likewise, my paternal grandmother, the late Mama Asma’u Odunola Alabi, wife of the late Pa AbdulSalam Adegbola Alabi, alias: “OWO N’IWON” (The hand is the measure), of Oyetunji Olundegun Chieftaincy Family of Ile Oye, SW2/486, Ita Aaregbeomo, Isale ‘Jebu, Ibadan, had predicted that I would get married in the United Kingdom.

I first met Tokunbo sometime in 1977 in London, where we were both students, when she visited my residence, 82, Prince George Avenue, Stoke Newington, London N16, in search of her Pitman’s College London schoolmate and friend, Miss Tutu Olanipekun, later Mrs Aigbogun (now of blessed memory). Tutu was a housemate of mine.

As Tutu was out of the house the day Tokunbo visited, I offered to play the role of a gentleman that I have always been. But, she rebuffed all my pleas that she please come inside the house and join the on-going birthday party of another male housemate of mine, holding in our residence. I was the MC of the party. She even gave me a wrong name, Miss Tokunbo Williams, when she left a message for Tutu.

She apologised profusely to me, and being the gentleman that I am, I forgave her immediately. Which man would not? My polished manners eventually paid off, as the rest is history.

But for the lockdown occasioned by the raging Coronavirus (COVID-19) pandemic, the family was scheduled to be in London today for the start of the preliminary celebrations of my 70th birthday and the 42nd anniversary of our wedding.

It will be recalled that our 25th, 30th, 35th and 40th wedding anniversaries were celebrated in the same church in London, where we tied the nuptial knot on 12th August, 1978, with the same Reverend  John Rankine, now retired, officiating. Praise God for His mercies that endure.