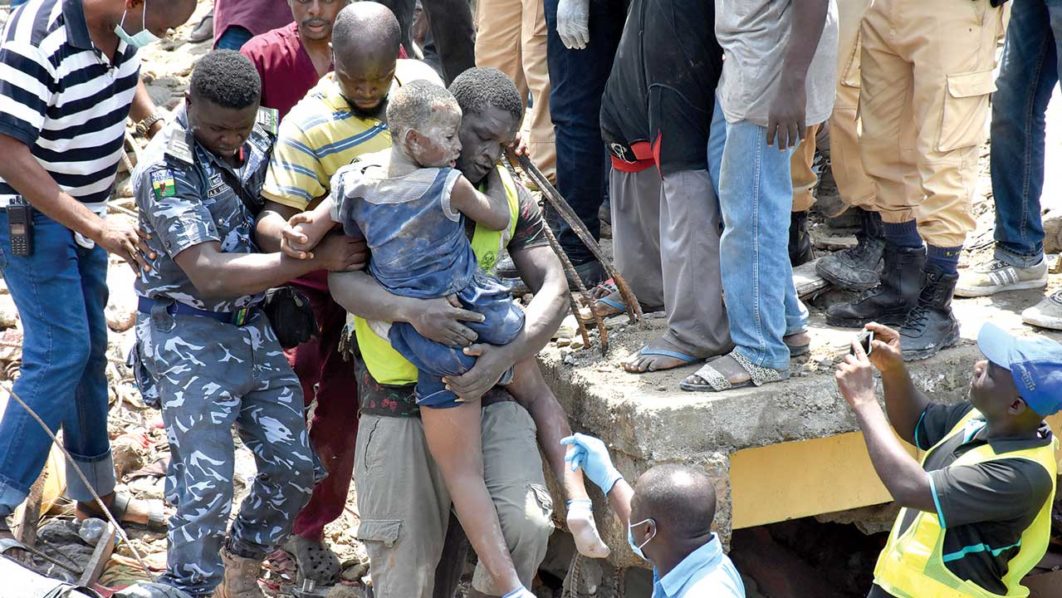 A pregnant woman, the proprietor of the nursery/Primary school and 19 others, including no fewer than 12 pupils died in the collapsed building at Massey Street, Itafaji on Lagos Island on Wednesday, witnesses and hospital sources said.

However, the National Emergency Management Agency (NEMA), said eight persons died, while 34 others were rescued in the wreckage of the building that collapsed at about 10 am.

Lagos State Emergency Management Agency did not give the number of the dead, but said it rescued 10 persons out of the wreckage.

The agency said its rescue team and other agencies brought out 10 people alive, made up of three adult females, one adult male, two teenage boys, n young boy and three teenage girls.

The South-West Zonal Head of Public Affairs of the Agency, Ibrahim Farinloye said the rescue operation was ongoing as at 8 p.m.

NAN gathered that most of the victims were rescued from the rubble on Wednesday, but died at the General Hospital as doctors failed to save them.

NAN learnt that the pregnant woman was one of the persons rescued from the rubble, immediately after the building collapsed, but she died in the hospital.

Other persons reported dead as at 8 p. m. included the proprietress of the school, Ohen Nursery and Primary School, about 12 pupils and some occupants of the building.

NAN gathered that about 10 different families occupied the first and the ground floors, while the school occupied the second and fourth floors.

The building at 63 Massey Street, it was learnt had been marked for demolition by officials of the Lagos State Building Control Agency.

However, the occupants of the building frustrated the demolition.

NAN further learnt that 17 of the rescued students and occupants of the building were taken to Massey Children Hospital, very close to the scene, while others were taken to the Lagos Island General Hospital on Broad Street.

A worker at the Massey Children Hospital, who spoke with NAN on condition of anonymity said that four out of those brought in, died few minutes after.

The medical staff said that six of those who were rushed to the Lagos General Hospital also died.

Governor Akinwunmi Ambode, who visited the scene said the government would ensure that the trapped victims were rescued.

The school moved to the collapsed building some years ago.

Distraught parents of pupils and residents of the building jammed the scene of the rescue operation hoping that their children and relatives would come out alive.

Bukola Salami, a former staff teacher in the school who spoke with NAN, said the proprietress of the school had been told to vacate the building but she balked on account that she had no money to rent another apartment.

”It was because of the situation of the building that forced me to resign from the school in December, because I don’t want to risk my life.

“It is unfortunate that such incident happened. It looks like a dream to me,” she said.

A resident of the collapsed building, who simply gave his name as Akin, said that the building was marked for demolition but “the developer found a way to stop the demolition”.

Mr Akin said he had gone to work, when he received the news of the incident. He also stated that the owner did some renovation two years ago.

A neighbour, Adewale Owoso, likened the moment the building collapsed to a bomb explosion.

“We were just sitting down in front of the school, when we heard a loud sound .

“We all ran into different directions but after the dust had settled, we realised that it was the building that collapsed.

“We quickly mobilised and began some rescue operation and we had rescued more than twenty people, before the emergency workers arrived,” he said.

“I don’t know how she is going to survive it. It is too big for her to bear,” she said.

The deputy speaker of the State House of Assembly, Wasiu Esinlokun, who visited the scene of the incident, said a notice for demolition was served on the building on Tuesday, a day before the building collapsed.

Mr Esinlokun, while speaking with journalists said that the Lagos State Government would ensure that victims of the incident are treated free.

As at 8.30 pm, NAN gathered that some of the parents whose children died in the hospital had gone to pick up the corpses for burial.