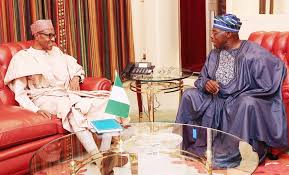 The ongoing ‘below the belt’ attack between President Muhammadu Buhari and former President Olusegun Obasanjo, has taken another twist.

The Presidency on Sunday accused Obasanjo of masterminding illegal ouster of at least five governors during his tenure as President.

Garba Shehu, a presidential spokesperson, said that Obasanjo’s tenure, 1999-2007, represented the dark days of Nigeria’s democracy due to a slew of assaults on the constitution.

He argued that President Muhammadu Buhari has painstaking followed the Nigerian constitution since he assumed office in 2015.

The politicians include governors of Plateau, Oyo, Anambra, Anambra and Ekiti, respectively.

“When they ran the government at the centre, the opposition PDP showed aptitude in only one thing: the toppling of elected state governments using the police and secret service under their control,” Shehu said.

He gave account of how Obasanjo allegedly perpetrated the alleged constitutional infractions.

“A five-man legislature met at 6:00 am and “impeached” Governor Dariye in Plateau; 18 members out of 32 removed Governor Ladoja of Oyo from office; in Anambra, APGA’s Governor Obi was equally impeached at 5:00 a.m. by members who did not meet the two-thirds required by the constitution.

“In Ekiti, Governor Fayose in his first term faced allegations of financial corruption and murder. Following the failure to heed the instruction of the presidency to impeach only Fayose and spare the deputy, Madam Olujimi, now a senator, the PDP President declared that there was a breakdown of law and order in the state and  declared a state of emergency.

“He appointed Brig-Gen. Adetunji Olurin (rtd) as the sole administrator of the state on October 19, 2006. In an earlier incident in Anambra, it took an insider collaboration to thwart the unseating of Governor Ngige by a powerful thug sponsored by the PDP administration.

“The parliament at the centre seized the law-making powers of the Rivers State House of Assembly as a way to save Governor Rotimi Amaechi, the then chairman of the Nigerian Governors Forum from impeachment by the PDP presidency.

“Thank God for Buhari, none of these absurdities has happened under his watch but the PDP is indicating their boredom with his meticulous observance of the constitution by calling for a return to the old order,” the spokesperson said.

Presidency Accuses Obasanjo Of Orchestrating Removal Of 5 Governors was last modified: May 28th, 2018 by Igbokwe John