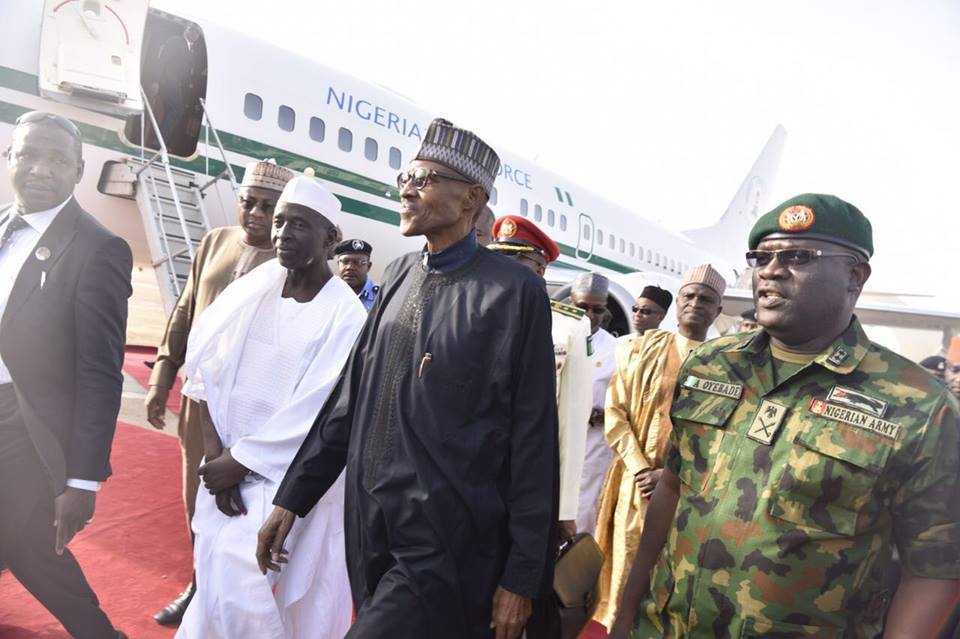 President Muhammadu Buhari on Tuesday headed to Yola after a five-day private visit to his home in Daura, Katsina State

Buhari was in Daura to commiserate with members of his extended family, who were bereaved recently.

The presidential aircraft took off from Umaru Musa Yar’adua International Airport, Katsina, about 10.30a.m. and headed for Yola where he is expected to declare open an anti-corruption conference.

While in Daura, Buhari received hundreds of sympathisers at his private residence to console the president over the deaths of two extended family members, Hajiya Halima Dauda and Hajiya Ai’sha Alhaji Mamman.

They also sympathised with him over the auto-crash involving his son, Yusuf.

Among the early callers were state governors from All Progressives Congress (APC), including the Chairman of Nigerian Governors’ Forum and Zamfara Governor, Alhaji Abdulaziz Yari.

The governors of Benue, Osun and Ogun were represented by their deputies at the meeting.

The governors of Yobe and Plateau were also represented at the meeting.

Okorocha, who spoke to newsmen after the visit, said their mission to Daura was to condole with the president over the loss of two members of his extended family.

He said the governors also used the opportunity to commend the president for appointing Asiwaju Bola Tinubu as APC Chief Mediator in the party’s conflicts.

The governor, however, dismissed the assertion that their meeting with Buhari which was held behind closed doors, was politically motivated and aimed at convincing the president to seek re-election in the 2019 presidential election.

He said: “We are yet to discuss that. That would be in next the meeting where we will discuss whether we want to support him to run or not.

“But for now we came on the issue of the death of his two relatives and to commend him for action taken on Tinubu as a conciliator.’’

Similarly, the Emir of Maradun in Zamfara, Alhaji Garba Tambari, on Sunday paid a condolence visit to the president.

Tambari, shortly after the visit, pledged the unflinching support of the traditional institution to Federal Government policies and programmes geared toward improving the welfare of Nigerians.

The emir said that some traditional rulers across the country had resolved to ensure the re-election of Buhari in 2019.

Also on Sunday, Buhari received Katsina Senior Citizens led by Masari where he called on all citizens, particularly the elite, to be prepared to make sacrifices as a foundation for national growth and development.

Masari, after the meeting, said they were in Daura to condole with the president over the death of his two relatives.

He said the forum would soon issue an advertorial on the letter written to Buhari by former President Olusegun Obasanjo.

On Monday, Buhari met with members of Daura Emirate coalition who also condoled with him over the demise of two relatives.

The president, at the meeting, disclosed that all unclaimed looted assets, including landed property recovered by the Federal Government, would be sold and the proceeds deposited into government treasury.

The president said he would not allow a repeat of what happened in the 1980s when buildings and other ill-gotten property seized by his military administration were returned to corrupt officials following his ouster as Head of State.

The president told the groups that the APC-led government would consolidate on the gains and monumental achievements in the development of infrastructure across the country.

“For most ordinary Nigerians, if you give them good roads, railway and stable electric power they will be happy to carry on with their lives.

‘‘We are doing so much for our country and we will continue to do more out of the fear of God,” the president said.

SEE ALSO: WINNING A GRAMMY IS MY NEXT TARGET – ORITSEFEMI