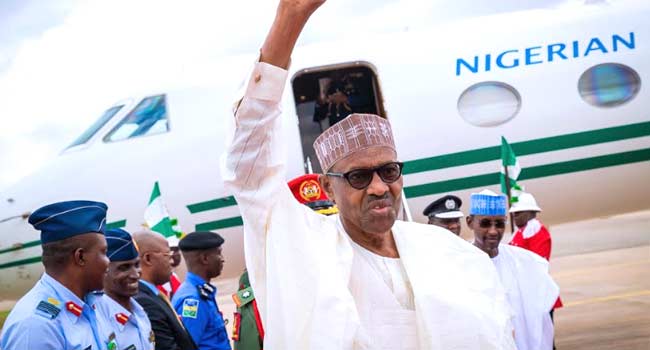 President Muhammadu Buhari has returned to Abuja after a three-day medical trip to London, United Kingdom.

The President left Abuja on Tuesday, May 8 for the medical trip.

In a tweet announcing his departure, President Buhari on Monday said, “I will be travelling to the United Kingdom tomorrow, to see my doctor, at his request. Will be away for four days; back in Abuja on Saturday, May 12.”

His aircraft touched down at Nnamdi Azikiwe Airport in Abuja by 7:00 pm today.

His Special Assistant on Media and Publicity, Garba Shehu, had said the President would return on Saturday but he returned back to the country a day earlier.

Shehu said the President earlier had technical stop-over for aircraft maintenance in London on his way back from Washington after meeting President Donald Trump.

President Buhari according to Shehu then had a meeting with his doctor who requested he return for a meeting which he agreed to do.

Shehu also revealed that upon his return, President Buhari will embark on a two-day State visit to Jigawa on Monday and Tuesday next week

President Buhari Returns To Nigeria After London Medical Trip was last modified: May 11th, 2018 by Reporter