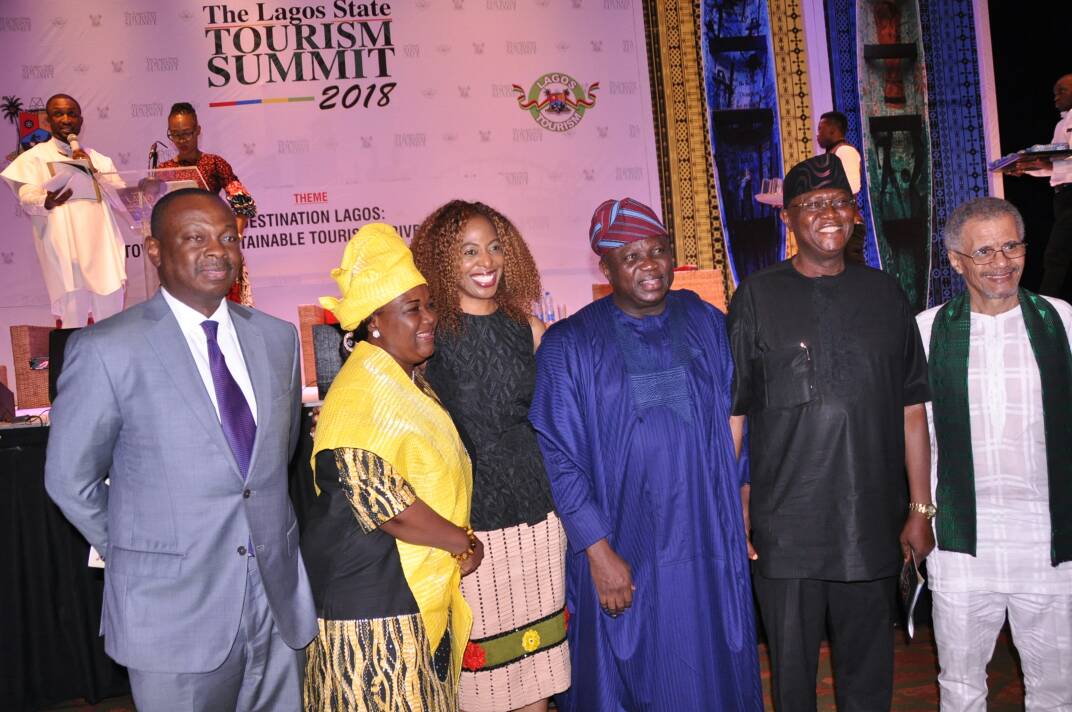 Governor Akinwunmi Ambode has revealed that the State is on the path to becoming the biggest and brightest destination for tourism and entertainment in Africa.

The Governor made this known at the 2018 Lagos Tourism Summit held at Eko Hotel and Suite, Victoria Island, Lagos on Monday 16th April, 2018
The summit with the theme Destination Lagos: Towards a Sustainable Tourism Economy was an avenue to collate resourceful suggestions, ideas and experience as content for tourism roadmap in Lagos State.

His Excellency declared that the tourism sector contributed $2.2 billion to the State Gross Domestic Product and with the infrastructure and resources being deployed in the sector, the target is to double or triple it in the next 5 years.

‘’The enormous resources we have deployed in the physical and social infrastructure across the state will begin to crystalize by December into mega structures that will support tourism and market our state as a smart destination’’
He also noted that his administration has placed tourism as core aspect of its growth strategy, adding that a solid foundation for the continued prosperity of Lagos is paramount.

Speaking further, Governor Ambode disclosed that the strategic plan for tourism progress will focus on six sectors including; culture and heritage, film, art and entertainment, business tourism, nature and adventure, medical and wellness, beach and leisure. The Governor stated that this is one of the legacies his administration aimed to bequeath to Lagosians.

We are humble enough to draw enough inspiration from what cities like Miami, Sao Paulo, Dubai, Singapore and Tokyo are doing with Tourism and we see how African cities like Cape Town, Cairo, Marrakech and Accra have drawn attention to themselves as tourism havens of varying degree, he said.

Speaking at the event, the former Ghanaian President, Mr. John Mahama affirms that Lagos truly can become the Tourism hub of Africa having taking into cognizance the overwhelming infrastructure and human development being witnessed in the State.
He added that Africa as a continent has the potential to arrest the attention of the world by creating and investing in its abundant natural and historical edifies adding that adequate and strategic reform is needed to achieve such dream.
While delivering his good will message, the Hon. Minister of information and Culture, Alhaji Lai Mohammed harped on the relevance of infrastructure and service delivery as key potentials to boost the tourism sector.
The summit witnessed the convergence of local and international stakeholders, professionals, leading academics, scholars and researchers in the tourism, culture and entertainment industry and media practitioners deliberating on the master plan for Lagos Tourism development.

Shall We Tell The President? – By Simon Kolawole