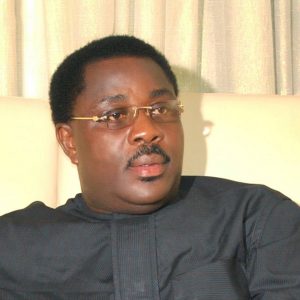 The rumour has been making the rounds for months that Debo Adesina, the debonair Editor-In-Chief of the The Guardian newspapers, will be running for Oyo State’s No 1 job.  For months, everything had been mere speculation, because this brilliant professional has not confirmed or denied his interest in the governorship race. All he has shown passion for, over the last 2 years, is his concern for his kinsmen, the Oke Ogun people.

For the past 24 months, he has been delivering lectures to both the old and young people in and around Oke Ogun, highlighting the need for something to be done to the marginalisation of the Oke Ogun people. He is eminently qualified to say that. He is an accomplished media guru. He  is passionate about his people.

He is from Okaka in Itesiwaju Local Government Area of Oyo State. His position as Editor-in-Chief of The Guardian has made him to be very influential because his newspaper belongs to the most influential group of newspapers in Nigeria. He studied Mass Communication at University of Lagos. He also studied at Kennedy School of Government, Harvard University, Boston, USA.

Saturday, a weekly, renowned then as Nigerian journalism’s main event.

Under his watch, The Guardian became a perennial winner of the Newspaper of the Year Award from both the Nigerian Media Merit Award Foundation and the Diamond Award for Media Excellence, including the Newspaper of the Decade on the only 2 occasions that honour has been given (in 2001 and 2011) by DAME. The group of newspapers has produced, under Adesina’s watch, winners of some of journalism’s most prestigious honours globally, including the CNN/Multichoice Journalist of the Year

Adesina himself has won, a record 7 times, the Editor of the Year Award from the most prestigious Foundations and has been nominated Outstanding Young Person of the Year, among many other honours. He is currently the only Nigerian on the Panel of Judges for the CNN African Journalist of the Year Awards.

Celebrated as one of Nigeria’s best journalists and a writer of evocative prose, Adesina has the honour of being in the vanguard of those men and women, who have helped to expand the frontiers of Liberty and Democracy in Nigeria.

He was awarded the ‘Young Global Leader’ honour by the World Economic Forum in Davos, Switzerland in 2006, becoming one of a select group of young personalities from different professional backgrounds across the world, given the charge of charting a new course for global development. He serves in informal capacity as counselor to business and political leaders across the world. A man of ideas Adesina is a much sought-after speaker on the lecture circuit in Nigeria and internationally.

In 2008, he was appointed a Federal Commissioner in the Fiscal Responsibility Commission, the body charged with the task of monitoring budget performance at all levels of government in Nigeria, by President Umaru Musa Yar’Adua. He relinquished the position to concentrate on his journalism practice.

Because of his passion for anything Oke-Ogun, the elders and the stakeholders in that part of Oyo State have mounted pressure on him to run for Oyo governorship in 2019. But he is still watching the situation of things in the polity. Why the pressure has been mounting on him is becuase of his numerous lectures about Oke Ogun issues. In one of his recent speeches, he cried out loud that Oke Ogun has been neglected.

“Our land is blessed beyond description”, he wrote. “Yet our people live in abject poverty beyond comprehension”.

“Democracy, 16 years after, has given the people of Oke Ogun neither material benefit nor psychological uplifting. While the region has the wealth of the state embedded in its soil, those gifts have not been taken on the condition of justice and mercy for the people. And, at least, as far as political power and greatest good of the greatest number are concerned, the upward avenues of hope cannot be said to be equally free to all the people”.

“According to the Oyo State Economic Empowerment and Development Strategy (OYSEEDS)- 2nd Edition: 2010 -2012], Oyo State, covers a land space of about 27,249 square kilometers and has 33 Local Government Councils.

The state, especially the Oke Ogun area, comprising 10 of the Local Governments, is blessed with vast agricultural land mass with a soil structure conducive for production of diverse range of arable and tree crops, fruits, vegetable, all classes of livestock as well as fishery, forestry and wild life products. Indeed, about 70% of the population is engaged in farming and related activities. Oke Ogun occupies about 60% of the land mass of Oyo State and is home to about 35% of the population made up of some of the best brains in any field”.

“In spite of all these potential, Oke Ogun is still grossly deficient in linkage between agriculture and industry especially in the area of storage, preservation, utilisation and value addition to the primary products.”

Oyo State and Oke Ogun in particular, is blessed with deposits of solid minerals. These minerals have been found in commercial and mineable quantities: Marble, Dolomite in Igbeti, Olorunsogo Local Govt. and in Alaguntan, in Oriire Local Govt; Tourmaline in Budo Are and Komu, Itesiwaju Local Govt; Tantalite in Olodo, Egbeda Local Govt and in Sepeteri, Saki East Local Govt; Feldspar in Atiba Local Government; Quartz in Itesiwaju Local Government; Bismuth in Iwajowa; Agate in Iwajowa and Itesiwaju; Cassiterite in Saki-East; Columbite in Itesiwaju and Saki-East, Talc in Ona-Ara; Kaolin in Ado-Awaye in Iseyin Local Govt; Coloured Granite in Irawo, Atisbo Local Govt. and so many other minerals in other parts of the state.

THE ROT AT HOME

“From the foregoing, there is no doubt that Oke Ogun is a blessed area and nothing ought to hold it down. But down, in terms of development, we must admit, is this region.

How a people so blessed could appear so cursed as a result of their own lack of vision and, of course, successive government’s neglect is a shame that must end.

“Poverty and Underdevelopment ought to be alien to Oke Ogun if the governments had done right by the area and if the indigenes had actually committed themselves to its development.

“That our governments at all levels have committed heavy crimes against the people by leaving the place as it is today goes without saying.  For even in the mid of the planlessness, rudderlessness, underdevelopment and neglect of the people that have characterised Nigeria and Oyo State in particular, Oke Ogun still stands out as the worst hit among the badly hit.

“It remains one of the least developed areas of Nigeria in terms of infrastructure and economic development, even while it is one of the best endowed in material and human capital.

“From the recorded profile of each of the 10 local government areas, Oke Ogun has the land, the mineral and agricultural resources to be one of the richest parts of Nigeria if only these resources were developed.

“One can, however, deduce from the local council area profiles that there is no exploitation of these resources on the kind of commercial scale as would have yielded the abundant wealth nature has planted in Oke Ogun.

So, farming is still generally done at subsistence level, thereby making it impossible for the cycle of poverty to be broken.

“In Education, the profiles of the local governments also show that the ratio of teachers to students in Oke Ogun is scandalous, while the ratio of medical facilities and personnel to the population is much more horrible.

“Housing, decent housing, is not available to the majority of the people.

“The woes are, indeed, legion.

But if things are the way they are, with Oke Ogun ranking among the poorest parts of Nigeria, with unemployment rate one of the highest in the country even with the abundant resources available, it is time for a new approach to governance.

“We must shift the gear from neutral to forward-drive by way of an optimal exploration of the resources and the utilisation of same for Oyo State’s prosperity and Oke Ogun’s development.

“We need a new approach that will enlist the people in their entirety and empower them to deploy their creativity in productive ventures.

The tragedy of Oke Ogun is that while Natural Capital is available in super abundance, the non-availability of the other capitals puts the natural abundance to waste, leaving the people poor.

So, where do we go from here?

One thing, however, is certain: Governments must help, but Oke Ogun would develop faster through a conscious promotion of individual, communal and private sector entrepreneurial initiatives.