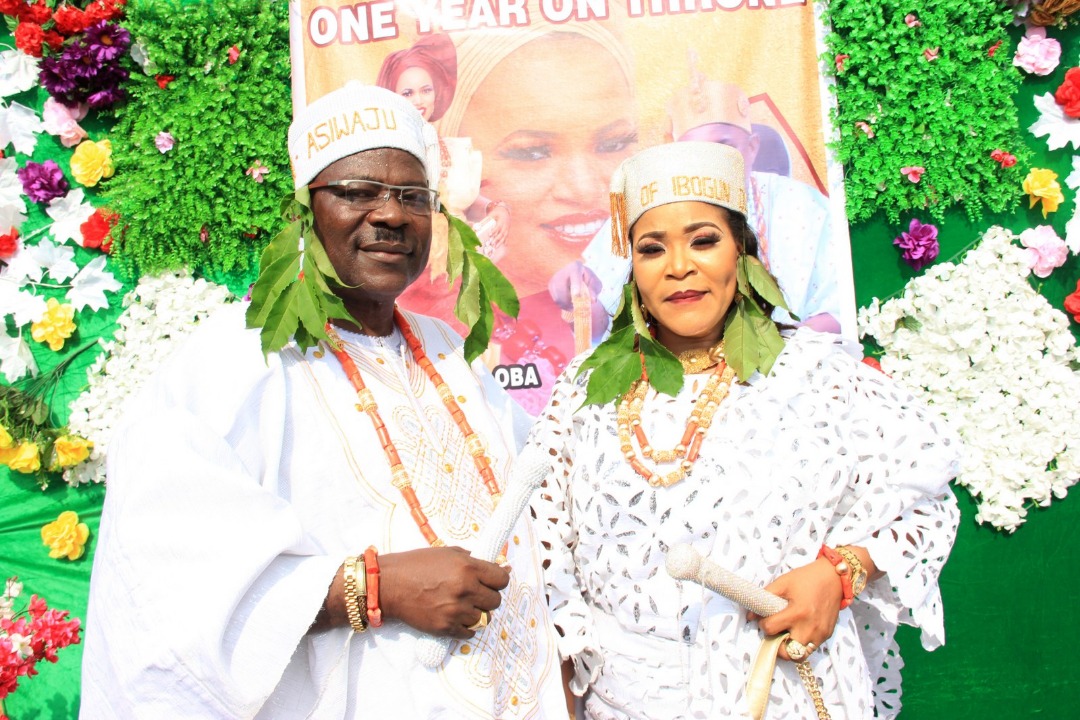 The town of Ibogun Olaoporun welcomed all the big celebrity men and women in Lagos, Abuja and across the country on Sunday, November 21, 2021, as Oba Abiodun Ogunronbi marked his first coronation anniversary in style. However, that was not the big news. The big news was that Prince Abdu-Lateef Adedamola Adesina and his beautiful wife, Chief Mrs Afolasade Adesina became the Asiwaju and Yeye Asiwaju of the Ibogun kingdom and they added glamour and life to the event.

It was such a classy party that men of timber and calibre came from all over Nigeria and from different walks of life to honour their friends who bagged different chieftaincy titles. Notably, Asiwaju Adesina and his wife, Yeye Asiwaju Afolasade Adeshina deserved this honour. For Asiwaju, it was just the icing on the cake. He had bagged about fifty different chieftaincy titles across the country and has evenly contributed his quota to the development of such communities.

City People’s duo of Brands Editor, DAMILARE SALAMI 08155134152 and senior photojournalist, Abdulrasheed Sanni was there and in this report, he brings you all the background gists, enjoy.

Chief Mrs Folashade Adesina (Nee Ogundimu ) is a fabric merchant with excellence written all over her. Her fashion boutiques dotted all around Lagos Metropolis and Port Harcourt; which in turn has taken her far and wide globally. Right now, she is a successful business tycoon, she does importation from Europe, the far East and USA.

She is the chairman/CEO of New Symbol Nigeria Ltd and the Executive Director, Damol Shipping Company, a philanthropist of note, who has bagged several merit awards from organizations, communities, NGOs and different religious organisations.

Yeye Folasade is an alumnus of Estate Baptist Primary School and New Era Girls Secondary School, all in Surulere, Lagos.

She came out in flying colours in her academics and the best mathematical student of her time. She then proceeded to the Yaba College of Technology where she studied Land Surveying at the OND level and Estate Management at the HND level. She finished with distinctions and thereafter delved into the fabric business.

Who is Asiwaju Abdu-Lateef Adedamola Adesina

Commonly referred to as triple-A, Asiwaju Abdul-Lateef Adedamola Adesina – AAA is a man of high integrity and dignified character, who over the years, has been able to get the admirations and respect of both political associates as well as the good people of Ogun State, his home state.   This is also largely due to his philosophic gestures and impeccable leadership qualities!

Prince Adesina who is the Ogun State Chairman of Young Progressive Party (YPP), is an astute homegrown politician, respected community leader and philanthropist of note, who over the years has contributed immensely to the socio-political and economic development of his home state of Ogun.

And as a testimony to his political competence and leadership qualities, he was overwhelmingly elected as Chairman of the Inter-Party Advisory Council (IPAC) Ogún State Chapter, which consists of over 90 registered Political Parties, in Dec 2019 and reelected again in January 2021 to serve yet another glorious term.

Adesina who holds several religious titles, including the title of Baba Adini General of over 50 Muslims forums/organisations, was born about 55 years ago into the Igbore Royal Family in Abeokuta, Ogun State; and his ruling family villages/towns span over Ishasi, Esorun, Odubaale, Olajumoke and Onibudo land etc. All in the present Ifo Local Government Area of the State.

He started his primary education at Ahmadiyah Primary School Ogba- Ikeja, later, Ahmadiyah College in Agege, Lagos; for his O & A Levels Certs before proceeding to the University of Lagos to study political science, where he bagged Bachelor of Science (B.Sc Hons. Pol. Sc)

The young prince, because of his thirst for education also attended various courses home and abroad, getting certification in Marine Technology, Freight Forwarding and Shipping Services. He is also a fellow of the British International Institute of Freight Forwarders UK (BIFF).

He returned to Nigeria in the year 1991 after a very successful study in England and was transferred to Port Harcourt as a Branch Manager of Murpphy Shipping and Commercial Services Ltd an affiliate of Murphy  International (UK) Ltd. Based on his managerial skill and his industrious acumen, he was given a double promotion to become the general manager of the company in 1992!. Prince Adesina has also worked at top levels with various multinational companies in the maritime industry. These include but are not limited to: Murphy International London, Joe Eboje Int’l, Port Harcourt and the African Airline in Lagos.

He was also the Chairman of many viable companies which include Makves Nig Ltd, Jimnat Nig Ltd, Damol Ventures and Damol Shipping among many other successful enterprises. Described as a man that had the blood of kindness running through his veins, his people and associates prevailed on him to join politics in 1998. He rose through the ranks of political machinery/hierarchy, to become the Ogun State Vice-Chairman of the largest party in Africa, the People Democratic Party of Nigeria, (PDP). He has also contested twice for the House of Representative’s slot in Ifo/Ewekoro Federal Constituency under the platform of the Party.

Prince Adesina holds several chieftaincy titles, which includes the Asiwaju of Ifo Land, Asiwaju Balogun of Agbado Land, Are Asiwaju of Akute Land and Agba Akin of Itori Egba Land among many others.

Because of his goodwill, he is married to Princess Alimat Afolasade Aduke Adesina, nee Ogundimu/ Oba Akintoye of Lagos. Asiwaju and Yeye Asiwaju are blessed with many beautiful children.

There’s no doubt that this tall, dark and handsome man is influential on many fronts. This was proven by the number of people that followed him down to the event from Lagos. At the event, Otunba’s guests stood out both on and off the stage. They were well-positioned at the centre of the venue where they had first-class access to maximum entertainment and enjoyment. Asiwaju, himself a very hospitable man ensured that all his guests were well catered to with more than enough to eat and drink.

Before the party got started at all, the first point of call for Asiwaju and Yeye Afolasade Adesina was the palace of the Olu of Ibogun Olaoparun, HRH Oba Abiodun Ifayemi Oguronbi who led the coronation exercise with his blessings. Also present at the coronation exercise was the Alake of Egbaland, HRM Oba Adedotun Aremu Gbadebo III who was ably represented by the Baajila of Egbaland, High Chief Dr Olowokere and the kabiyesi’s staff of office. During this exercise, Asiwaju and his wife received all the traditional rites and they were afterwards unveiled as the new Asiwaju and Yeye Asiwaju of the land.

Let’s tell you about the beautiful fashion statement of Yeye Asiwaju Afolasade Adesina. When she stormed the event, she was dressed in very beautiful and expensive lace attire that other new chiefs also wore. It was supplied by one of Naija’s most popular Aso-Oke brands, Jumrash Aso-Oke. Everyone knows that Jumrash doesn’t deal in sub-standard materials. Therefore, Yeye Asiwaju and Asiwaju were simply on point.

Her second outfit left jaws widely opened. It was well-styled black and gold designer attire with her chieftaincy crown. To call it beautiful would be an understatement, it was gorgeous indeed. Yeye Asiwaju has eyes for quality and this was why everything she slayed at the event was top-notch.

Her husband too wasn’t badly dressed. Trust Asiwaju Adesina when it comes to looking good, he is a fashionable man and he has eyes for quality. His white agbada with Buba and sooro had no match at the event. He looked like a king and that is not a surprise because royalty flows in his veins. Many don’t know that Asiwaju Adesina is a crowned prince; that’s why everything he touches becomes royalty.

Did we mention to you that Asiwaju is a strong member of the country club in Ikeja? He pulled stunts all the way from Lagos to Ibogun as members of the club trooped in en masse, not minding the distance and road networks. Those who didn’t know who they were kept wondering how these heavy spenders and well-to-do personalities got to know about Ibogun-Olaoparun that is in the interior of Ogun state. Starting from their cars, down to their fashion statements, Asiwaju practically brought life to the community with his friends and brothers from the Country Club

The Village Men and Women Were Not Left Out

Those who didn’t know Asiwaju Adesina to be a philanthropist saw that side of him at Ibogun Olaoparun. He was spotted almost everywhere giving to the village people, the less privileged and even beggars who came to seek alms. City People gathered from some of the villagers that the town would surely experience better development if they had a handful of people like him coming around often.

How Prof. OGUNYE Celebrated His 80th In...