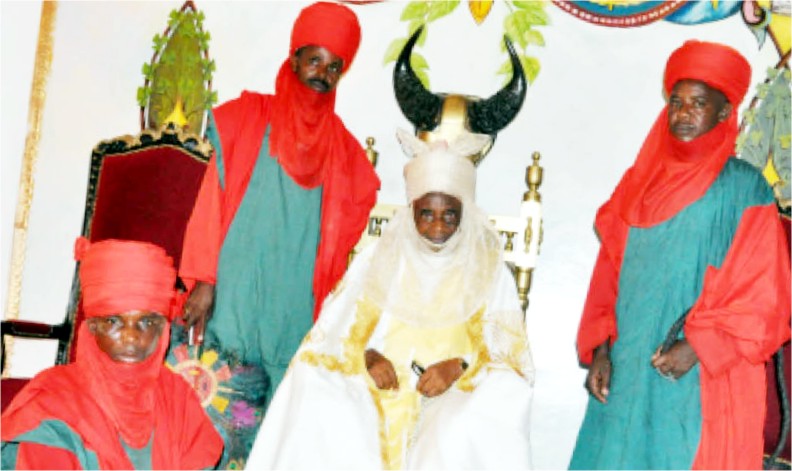 •The Story Of The 2 Big Families Revealed

It was a gathering of some of Nigeria’s billionaires and the high and mighty at the corridors of power on Friday, August 7th to Sunday 9th, 2020 at the palatial mansion of Borno billionaire Alhaji Muhammed Indimi when he gave out the hand of his daughter, Adama Indimi in marriage to Prince Malik Ado Ibrahim, the son of Kogi’s richest King, Ohinoyi of Ebiraland.

The lavish wedding was talk of the town owing to the 2 families involved as Alhaji Muhammed Indimi who is known not to do his things in a small measure made sure the event was top notch. Despite being a low key event, there was no doubt that many millions of dollars were spent to make sure many of the guests had a memorable experience. City People investigation revealed that the wedding hashtag, “themalikadamawedding was the wedding that declared Borno city open since the pandemic started.

What is their love story like? The Indimis only marry the rich and mighty. Is Malik rich to marry one of the super-rich silver spoon kids? Let us answer all the questions that must have crossed your mind about who Malik Ado-Ibrahim is. He is the son of the richest Kogi King. He is in his 40s and he is also super-rich. He is the founder of Bicernergy, an alternative energy company and is also the heir to the Ohinoyi of Ebiraland.

Prince Malik has tremendous international exposure in private and governmental business and hands-on involvement in generating international finance packages. He has a Comprehensive Knowledge of International Affairs and Conventional and renewable energy. He is accomplished in international affairs in proven and diverse subjects. He is got a strong International Military establishment background and got involved as a solutions provider in the ECOWAS region.

Prince Malik was educated in the UK and US and has a great aptitude for sports as well as international business and finance. He is an accomplished Polo player and racing driver and has risen to the very top of the motor racing world in GT racing and Formula 1 as an owner. He has been involved in high profile deals globally and has been honored and welcomed by governments and heads of state around the world. He has a great passion for public service and tremendous interest in sustainable living and environmental development in Africa.

Currently, he is the CEO of NIGUS International and the Executive Chairman of NEXT Satellite TV Ltd. NEXT Satellite will soon launch NEXT TV Direct-To-Home (DTH) and it is geared to generate thousands of jobs in the ICT and entertainment sector.

What about Adama Indimi? She is one of the super-rich Northern big babes. Though in her 20s, she is also doing well for herself. She grew up in Borno and Abuja. She also went to the best school abroad. She is a Kanuri bride. Her mother is the 2nd wife of the Borno billionaire. She is also super-rich and influential.

Considering the pedigree of both families, people expected nothing short of class and they were not disappointed. The simple but classy marriage rites began with the Henan night which took place in Maiduguri, Borno State, on Friday, August 7, 2020, followed by the Nikkai the following day at the palatial home of the Indimis. Though the wedding has only those who matter in attendance, it was obvious to all who attended that it was a high-octane and exclusive affair.

How did they meet? City People gathered that they have been dating for over one year before they decided to take the affair to another level. Many ‘A’-list Nigerian celebrity vendors also worked on the wedding.

Of course, Borno billionaire, the Oil Magnate Alhaji Muhammed Indimi needs little Introduction. Who then is Ohinoyi of Ebira?

Let us gist you fully about who he is.

The Ohinoyi of Kogi, His Royal Majesty (HRM), Alhaji (Dr.) Abdul Rahman Ado Ibrahim is the richest King in Kogi. Ask any Kogi born and you will be told that his stool is not only powerful, but the occupant of the stool is also very powerful, influential, and highly connected.

He has always been rich even before he became the king in 1997. Though in his early 90s now, his palace is rated as the most beautiful palace in West Africa. This elegant palace is a sight to behold. Currently, the residence of the present Ohinoyi Ado Ibrahim serves as a political, historic, traditional and religious powerhouse for the Ebira people.

Since one of Ohinoyi of Ebiraland’s handsome son, Prince Malik Ado Ibrahim, Founder of Bicerenegy got married to Adama Indimi, the daughter of Borno billionaire and Oil Magnate Mohammed Indimi a few days ago, many who didn’t know much about the father of the handsome groom have asked questions as to how rich and mighty the father of the groom is. Some also wanted to know if he is a regular king or an influential one in his town and Nigeria as a whole.

In case you don’t know, his elder brother is Mammud Attah of First Bank of Nigeria. One of his siblings is the first Ambassador to Britain. Do you know Ohinoyi is the first Nigerian who mines from the soil? His father was the Attah of Ebiraland. He was very rich and highly influential too.

His late father has many children and all of them are rich. They all play big in banking, oil to mention to few. Though he is an only child but he doesn’t show it. Have you ever seen the convoy of Ohinoyi when he moves to leave his palace? His convoy comprises of powerful automobiles. He also has a private jet. This was what he flew to England during Abacha’s Regime.

When Ohinoyi turned 90 last year, he granted an interview with Daily Guardian where he spoke about his humble beginning and how he schooled in Harvard, life has an only child with many stepbrothers with his late Father, late Ata of Ebiraland. In his words “ I thank my dad who taught me how to live well. I must commend him for my education in Ondo High School. In Ondo Boys’ High School, I was a student boxer, and I loved the ring. Each time I came home, I put up a boxing hairstyle and my father one time asked one of his secretaries, “What is he boxing and where is his box?” And the late G. M Baiye, who was my father’s secretary, said, “No,  he fights with his fists and he can wound people with his fists.” My father asked me, “You have to use energy?’’ And I said, yes. He said, “Don’t smoke and don’t drink. Don’t ever do it because you will be weak and people will beat you everywhere.”

This is what I learnt from my father. I have never taken any alcohol and I don’t smoke. I remember Churchill said, “I smoke like chimney and drink like fish,” but I didn’t go through all that. I love to exercise, and boxing happens to be one of my games. When I was in England, I played Polo very well, and up till today, I still have my equipment for exercise”.

Did he train as a boxer?

“Yes, I did. I actually started it in Kaduna, amongst some youth boxers. In Lagos, I was actually in the ring and I was two times very well beaten, but I also did beat many people.”

“I won’t tell you. Boxing is a very good exercise. That’s why I was very friendly with Mohammed Ali while in California and I had a number of photographs with him. I was not a trained boxer, just an amateur.”

Speaking about his late father, the former Atta of Ebiraland?

“He was a great man; That’s all I can say. He spoke 14 languages. He spoke his native Ebira and English Language very well, with a bit of French. He was an interpreter for the British people when I was a young boy. He spoke Hausa, Yoruba, Igbo, Igala and Nupe, all very fluently. And a book was written by him. The man had brains; He was a marvelous person”.

How many are they in the family?

From how many wives?

“I don’t know. There were many of them. If one left, she would be substituted by another to maintain the Islamic requirements. There were so many people in the palace then. Whatever you call them, whether they were concubines, I don’t know. I have very many good brothers and they all respect me. There was no discrimination amongst us at all because, in our days, you didn’t eat in your mother’s house, you ate in houses of others’ mothers (stepmothers). The woman that would cook for you was different from your biological mother. There was no issue of someone poisoning another person, not at all. There was a cordial relationship in spite of the large number in the family”.

He is the only child of his mother. Was he pampered?

“I was not pampered because I buried myself amongst my brothers. I saw them as my brothers too. The only time I had quarrels was with one of my late brothers. But we reconciled and I was very happy, he knew he made a mistake. Besides that, I was very much at home with all of them”.

Alh. (Dr.)AbdulRahman Ado Ibrahim attended a Nursery and Quranic School and later finished his primary education from NA School in Okene, Kogi State in 1940. He later went to Ondo Boys High School and Oduduwa College and rounding up his secondary education in 1949.

He obtained a B.Sc in Economics from London School in 1954 and an MBA from Harvard Business School, 1959.

His enthronement as the Ohinoyi of Ebiraland was a grand occasion, attended by thousands of Ebiras and international diplomats and was broadcast on major Nigerian Television stations for days. He rules Ebiraland from his magnificent pavilion, AZAD Palace named after his son.

Malik Ado Ibrahim is not the only son of Ohinoyi of Ebiraland who is rich. He has other siblings who are also rich. Nadir, Kadiri are also rich too.

HRM Dr. Ado Ibrahim is gentle but rich. He is blessed with excellent managerial skills as well as local, national and international exposure and connections.

He is a man of principles and he is Open, Transparent and Diplomatic.

Above all, he is well versed in and committed, as bridge-builder, to upholding the ancient customs and traditions of the proud people of Ebiraland.