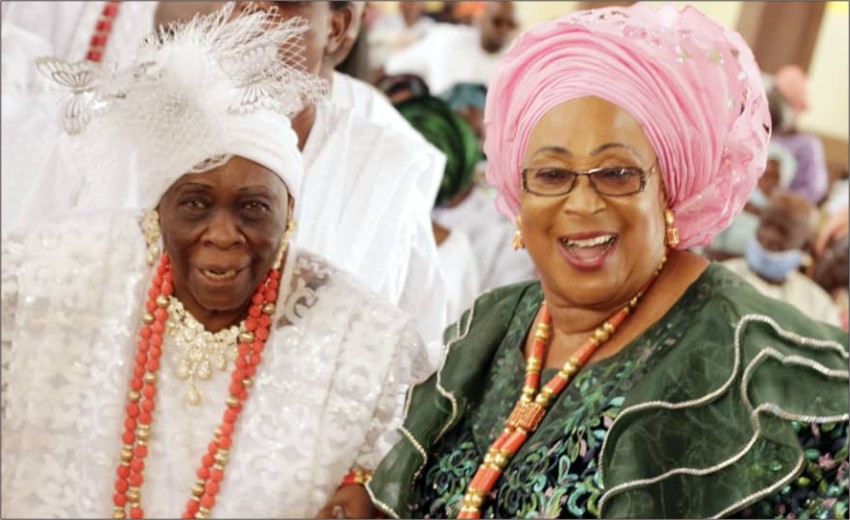 On Tuesday, 7th of December 2021, the sleepy town of Isara-Remo, Ogun State, bubbled as Princess Abiola Adenrele Akinluyi celebrated her 90th Birthday, in grand style. She is the eldest daughter of the renowned late Oba Samuel Akinsanya and mother of Olori Yetunde Tejuoso, one of the 3 wives of Oba (Dr.) Adedapo Tejuoso, the Osile Oke Ona. It was a colourful event as the royal family of late Oba Samuel Akinsanya and the Akinluyis played host to quality guests who came for the church service held at St. Peters Anglican Church, Isara-Remo. The reception followed immediately at the popular Afotamodi Event Hall in the town. Below are gists from the classy celebration.

The celebrant, Mama Princess Abiola Adenrele Akinluyi was in a happy mood all through the celebration. She is so happy she hit 90. According to one of her family members, she is the first lady to cross that age in the family. Mama is the first daughter of Oba Samuel Akinsanya, the Odemo of Isara who brought Isara to the limelight because of his political activism in those good old days. She has only one brother. But he is now late. He is Professor Akinsanya. They are the same father, but not the same mother. So, Mama is the oldest daughter alive now. Mama is a businesswoman and a Trader. She sells different materials and bulk foods. That was the same business her mother did.

MAMA’S CHILDREN RALLIED ROUND HER

The joy of any mother is to see her children rally round her on a day like this. Mama has 7 children, made up of 3 Boys & 4 girls. One of her children is Olori Yetunde Tejuoso. She is No. 3. Call Olori Yetunde, super Royalty and you won’t be wrong. She is a Princess married to a King. She is a Blue Blood. The 7 children of Mama are Mr. Kayode Akinloye, Mr & Mrs. Lola Sogbesan, Oba & Olori Yetunde Tejuoso, Mr. & Mrs. Seyi Lawal, Mr & Mrs Funke Ekeade (they are not in Nigeria), and Mr. & Mrs. Funsho Akinluyi.

ABOUT THE OFFICIATING MINISTERS

Because of the commitment of Mama Akinluyi to St. Peters Anglican Church, Isara-Remo, all the key ministers were in attendance. Those who officiated include, The Ven. S.O. Oyetade, Ven. Omowaye, Ven. Falipe, Rev. Babatunde, Rev. Akinyoola, Rev. Orangun & Rev. A J.  Lawal.

Talk of one Yoruba Oba who commands a lot of respect and dignity and his name will pop up.. Alaiyeluwa Oba (Dr.) Adedapo Tejuoso arrived Isara early for the 11 am service and he was joined by other traditional rulers in the Remo area. Oba Tejuoso is an in-law to the celebrant. They also call him Mama’s son. He is 83. At the event, he played many roles. He sat with Mama all through. He played the role of Mama’s companion. He also chaired the reception, although he tried to shift that responsibility to Engr. Jide who is 78. Many don’t know Kabiyesi is very witty. He likes to crack jokes, despite the fact that he is a disciplinarian who doesn’t take nonsense. Everyone will tell you that Kabiyesi is very strict. But he also makes people laugh. When he was announced the Chairman, he wondered why the MC picked on him, since he is an in-law. He now did simple arithmetic of adding up the ages of all those on the high table with his and announced the results he got was higher than his. Kabiyesi started by adding his own age 8+3 which gave him 11. Next, he added the age of Alhaji Lawal (his in-law). Alhaji is 71, so Kabiyesi added 7+1 which gave him 8. Next was the age of Kabiyesi’s son, Prince Lanre Tejuoso who is 57. Kabiyesi added 5+7 and got 12. And then that of Engr. Jide Sogbare (his in-law). He is 78. Kabiyeesi added 7+8 and got 15.

Kabiyesi then concluded that Engr. Jide is the oldest by virtue of his calculation. Kabiyesi then handed over the microphone to Engr. Jide, who promptly returned it back to Kabiyesi, who he said was the father of all.

One King who began the service with Oba Adedapo Tejuoso was HRH Oba Albert Adebose Mayingbe (Erinsiba III), the Odemo of Isara. The tall and handsome royal father was dressed in snow-white lace along with accessories. He sat on a special seat with Oba Tejuoso, on the 2 seats positioned right in front of the church. Don’t forget that the celebrant is the eldest daughter of the late Odemo Akinsanya. The Royal family of Oba Samuel Akinsanya were well represented. They were given special recognition.

Many royal fathers came for the event. They attended the church service. One of them is the Alaye Ode Remo, Oba Suv Amidu Adetunji Osho, Oba Mukaila Olabinjo Abejoye, Elepo of Eporemi, Oba Samuel Nuloku-Iraye and the Agura of Gbagura, HRM Oba Saburee Bakre who came with his pretty wife, Olori Agura who recently turned 45. Olori looked stunning in her HOH lace. She is not only a beautiful Queen, but she is also stylish too.

Oba Adedapo Tejuoso is one Oba who hardly attends events without his 3 beautiful Olooris. He usually goes to events with Olori Omolara Tejuoso, Olori Yetunde and Olori Labisi Tejuoso. The 3 were at the event. Olori Yetunde is the co-celebrant. It’s her mum’s 90th. And the 2 other Oloris came to give her support. When Olori Agba (Omolara) turned 70 about 2 months back, the other 2 Oloris rallied round her. At the Isara event, Olori Labisi was on her feet all through. She showed her dancing prowess. She is a good dancer. She danced so well.

READ ALSO: WHY PRIMATE AYODELE WILL NOT BE A PUPPET TO THE GOVT LIKE OTHER PASTORS – SOCIAL CRITIC, BEN ODAFE