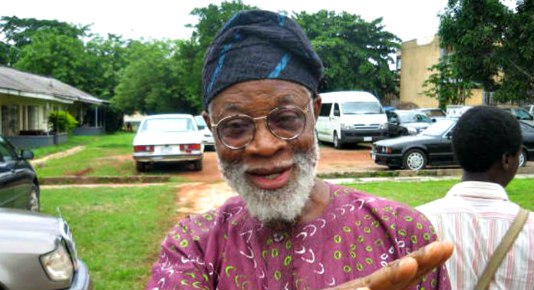 His death, which occurred in Ibadan, the Oyo State capital on Saturday morning, was confirmed to Qed.ng by foremost cinematographer, Tunde Kelani.

“Yes, Prof Ishola died this morning in Ibadan. He has been down for about two years now,” Kelani said over the phone.

“Sad to receive the news that Nigeria has lost the legendary writer PROF AKINWUNMI ISOLA, my former lecturer & supervisor; author of O LE KU and EFUNSETAN ANIWURA and others… Rest in Peace Sir…,” Momodu wrote.

Born in Ibadan in 1939, Prof Ishola attended Labode Methodist School and Wesley College in the capital of the old Western Region of Nigeria.

He studied at the University of Ibadan, earning a B.A. in French. He also earned an M.A. in Yoruba Literature from the University of Lagos in 1978 before commencing academic work as a lecturer at Obafemi Awolowo University where he was appointed a professor in 1991.

Among his most popular plays are Efunsetan Aniwura, Madam Tinubu, Oleku and Olu Omo.

His works, Oleku, Koseegbe, Saworoide, Agogo Eewo and Campus Queen were adapted to film by Kelani.

He worked with Kelani as a member of a trio which also had Adebayo Faleti and Larinde Akinleye, both late