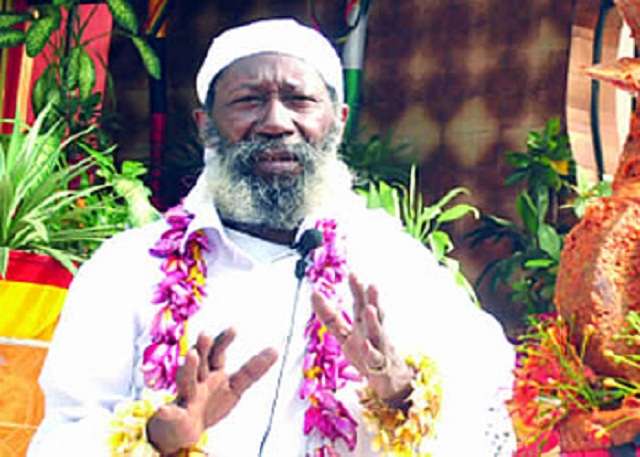 By The Grace of the Grace, we wish to inform the Chairman, Presidential Committee Against Corruption (PACAC), Prof. Itse Sagay, that his recent advice to the President in the Sun Newspaper dated Saturday 6th of March, 2021 that all Nigerians should bear arms in self-defense as a result of the precarious state of insecurity in the country is distasteful and un-Presidential.
It beats the imagination of the human mind, how a highly respected legal luminary of Sagay’s standing could make such an irrational call. This is simply symptomatic of systematic degeneration of our age long societal norms and values whereby the security of lives and properties of both individual and the community is achieved from “within” with the aid of Deities and Oracles.

In the good old days when love, peace and harmony reigned supreme, we never resorted to the use of gun to defend ourselves. Has he forgotten that the idea of defending ourselves with gun was introduced by the Oyinbos who wanted us to believe that the world is a cosmic joke?
Prof. Sagay should not pretend over the fact that as a race, we veered off from the Divine Culture of old and today, everything about our existence has gone hay-wire.
Unfortunately, till date, our people have not had time to reflect back so as to understand that the concept of God was a manipulative instrument of war employed to subjugate us to the whims and caprices of the Oyinbos.

It is therefore mind-bogging to believe that after putting iron chain on the necks of our fore bearers and subjecting them to all kinds of inhuman treatments, the Europeans will tell us the truth about the creation.
Hence, in a bid to engage ourselves with the ongoing confusion to keep body and mind together, we imbibed the alien culture without reason and with the passage of time, became aware that we have been fooled.
With dwindling spirit of love and perfect Divinity, the institutions were not allowed to work as we engaged each other in vain fight to gain ascendance in political hegemony along tribal and religious lines, which decimated the spirit of healthy competition, hard work and progress, and this gave rise to the socio-economic and political challenges we are facing currently.
In essence, Prof. Sagay’s ill-informed advice is diversionary. As corruption watch-dog, Prof. Sagay is saddled with the responsibility of providing the government with the best and effective moral armament needed to re-invent our national image and retarded progress, due to corruption as well as proffer solutions on how to reposition the nation along the path of sound, moral trajectory, that is germane to nation building.
Implicitly, Prof. Itse Sagay, would want us to believe that, so far, he has not been able to do much in this regard and appears incapacitated in stopping stealocrats from pillaging our national treasury. Hence, asking Nigerians to carry gun in self-defense, is a covert admission of failure on his part.
We are therefore reminding him that his advocacy is counter-productive because it tantamount to invitation of anarchy across the land. Rather, he should advice the government to make public the names of those who are being investigated by the graft agencies for stealing, with detailed information about their loots, so that the ordinary man on the street will know those behind their un-called for suffering in the midst of abundance, with Nigeria as the sixth oil-producing nation in the world, to serve as deterrent to others. This will go a long way in curbing the stealing-instinct/propensity of public officers, when they become aware that there is no hiding place for them, the moment they are caught in the act.
If our common wealth pillaged into private pockets is blocked and available resources are equitably channeled towards the welfare of the common man and adequate provisions made for critical infrastructural facilities to encourage vulnerable youths, who are pushed into crime-commission due to frustration, to become gainfully employed, they will see reasons to give up on such evil trade and the new vista of understanding and change of attitude will surely give way for more orderly, peaceful and secured society, rather than allowing everybody to carry gun.
Anybody who recommends that all Nigerians should carry arms is regarded as enemy of the people who don’t want Nigeria to rise again free from religious crisis that has held us back centuries ago. He should be charged with treason.
Just as we are about going to press we learnt of a private members motion in NASS for all Nigerians to carry arms which has passed through 1st reading and wish to please advice that this motion should be disregarded, discourage and stopped from going further for the reason that it will be like pouring petrol to quench a ravaging fire. Rather we should seek Allah’s intervention since God has failed to touch the hearts of our muslim brothers who are using their wealth and political power to hold Nigeria’s transformation to global limelight due to fear.
There is no need to fear, for the Grace is there in quantum to tap humongously and more than adequately.
My Love and Blessings

Many Of The Bridges AMOSUN Built Are...