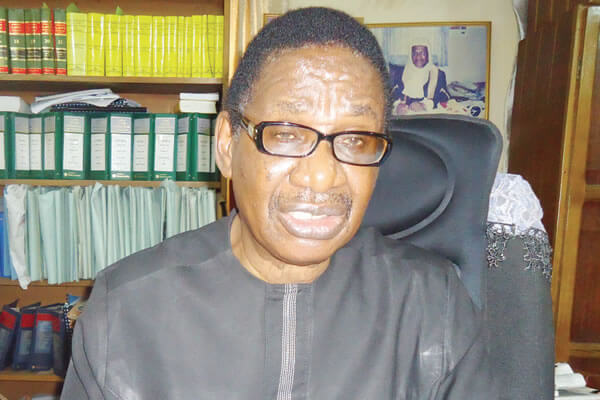 Professor Itse Sagay (SAN), Chairman, Presidential Advisory Committee Against Corruption (PACAC), has written to the Senate President, Mr. Bukola Saraki, demanding a withdrawal of the Senate resolution summoning him to appear before it. Should the Senate fail to do so, Mr. Sagay said he would challenge the summons in court once they are served on him.

The Senate recently asked Professor Sagay to appear before it for criticizing its call on President Mohammadu Buhari to sack Mr. Ibrahim Magu, acting Chairman of the Economic and Financial Crimes Commission (EFCC).

In the personally signed letter, dated 3 April, Mr. Sagay said his criticism of the Senate was founded on Section 171(1) of the Constitution, which gives power to the President to appoint any person to hold or act in the office of the head of any extra-ministerial department of the Federal Government.

The PACAC Chairman explained that though he is yet to be served with any summons from the Senate, he is willing to join issues with the Senate over what he considers a potential violation of his constitutionally guaranteed freedom of expression.

“As you are no doubt aware, Section 88 of the Constitution, under which you have purportedly summoned me, is subject to other provisions of the Constitution, including Section 39 thereof. In other words, my freedom of expression cannot be abridged or violated in the course of exercising the oversight functions of the Senate,” wrote Mr. Sagay.

The PACAC Chairman noted that the National Assembly is empowered by Section 88 (1) and (2) of the Constitution to conduct investigations into the affairs of the Federal Government, with a view to promoting good governance and curbing corruption. He, however, argued that such powers are not limitless. He contended that the wide-ranging investigative powers of the National Assembly are circumscribed as they are exercisable subject to other provisions of the Constitution.

Mr. Sagay cited a number of cases to support his position.

“In Innocent Adikwu v. Federal House of Representatives (1982) 3 NCLR 394 at 416, the applicant, a journalist, was summoned by the respondent to disclose the source of a report published by him. The plaintiff challenged the order of the defendant,” wrote Mr. Sagay.

To set aside, the summons served on the applicant, noted Sagay in the letter, the Lagos High Court examined the limit of the investigative powers of the respondent under section 82 of the 1979 Constitution. The trial judge, Balogun J., Mr. Sagay said, held: “…it seems to me that an investigation directed by the National Assembly to probe into irregularities in election procedure with a view to amending the Electoral Act cannot be used to summon a secretary or leader of a registered political party to appear before it and produce the register of the members of that political party or the list of all persons who had made contributions to the fund of that political party. Nor could any person summoned to appear before such committee (whatever its terms of reference) be asked to state what political party he voted for at the last general election or any election. Such questions will infringe on fundamental rights of freedom of idea, speech, and expression. The examples of non-permissible usage of the legislative power of investigation could be multiplied to show that the powers of an investigating committee of the National Assembly or the House of Assembly of a State are not limitless but must be exercised in conformity with the Constitution.”

He also referred to the case of the Senate vs. John Momoh (1983) at the Federal Court of Appeal, which held that the Section 82 of the 1979 Constitution was not designed to enable the legislature to usurp the general investigative functions of the executive nor the adjudicative functions of the judiciary.

“The section enables either House to exercise power only with respect to any matter or thing with respect to which it has the power to make laws and ‘the conduct of affairs of any person, authority, ministry, or government department charged or intended to be charged with the duty of or responsibility for’ – ‘executing or administering laws enacted by the National Assembly’ and ‘disbursing and administering monies appropriated or to be appropriated by the National Assembly’. In other words, the section does not constitute the House as a universal ‘ombudsman’ inviting and scrutinizing the conduct of every member of the public for purposes of exposing corruption, inefficiency or waste,” the Federal Court of Appeal held.

On the basis of the cases cited, Mr. Sagay said he is convinced that the Senate lacks the power to summon him to justify his condemnation of the illegal actions of its members.

“Senate cannot be the accuser, prosecutor, and judge in its own case. However, any aggrieved member of the Senate has the liberty to sue me for defamation in a competent court of jurisdiction. Consequently, I urge you to withdraw the resolution summoning me to appear before the Senate. If you fail to accede to my request I will not hesitate to challenge the legal validity of the summons, once it is served on me,” concluded Mr. Sagay.