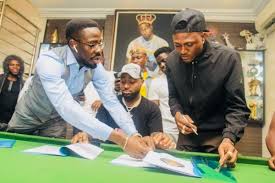 Davidos record label known as Davido music Worldwide (DMW) has welcomed yet another artiste to the crew, Idowest and NAIJ.com has details about the newest signee.

Earlier on, NAIJ.com reported the news of how Davido signed a new artist to his record label. The excited singer took to social media to make the announcement.

This makes him the sixth menber to be added to thefast growing family that houses Davido, Mayorkun, Dremo, Peruzzi and Yonda, with Ichaba remaining an affiliate.

As curious fans await the magic Idowest would make, NAIJ.com gather a few information about the artiste.

Here are 5 things you probably need to know about Idowest:

1. He shares a first name with Adekunle Gold

Idowest’s real name is Adekunle Idowu. Although he is popularly known as Idowest, it appears the music name is derived from his surname, Idowu.

2. He has been signed to three labels in two years

Although this could be considered his first major break in the music industry, Idowest has been signed to 3 different record label in two years. On June 15, 2017, the music act signed with P4 Music, a record label owned by a Mr Sodiq. However, following his return from being cleared of all charges leveled against him in the US, Dammy Krane revived his label, Worldstar Inc and on December 15 2017, signed the young rapper.

3. Idowest refers to himself as the King of Shaku Shaku

With the current dance trend, Shaku Shaku, a lot of people, celebrities included, have mastered the dance moves, declaring themselves kings and queens of the peculiar dance moves. It turns out Idowest is one of them.

The rapper who has been on his grind for quite a while now, claims that he was introduced to shaku shaku from his secondary school days and has been making the type of sound since then.

He said, ”I have been doing Shaku shaku before the vibe even came up, that’s why people call me Idowest, Aro Mafia aka the King of Shaku Shaku”.

4. Idowest was nominated at the 2018 Headies

His song, Omo Shepeteri which featured Dammy Krane and Slimcase and was released late last year, was nominated for the Best Street Hop artist category at the Headies 2018 music awards. However, the awards went to Small Doctor.

Earlier in 2017, Idowest used to be a member of the three man group called M.A.F.I.A gang. Other members of the group include, C Black and Abram Soul and they released singles like Panda (Cover) and Umbele.

QUICK: 5 Intresting things one needs to know about Davidos new signing”IDOWEST” was last modified: May 25th, 2018 by Igbokwe John