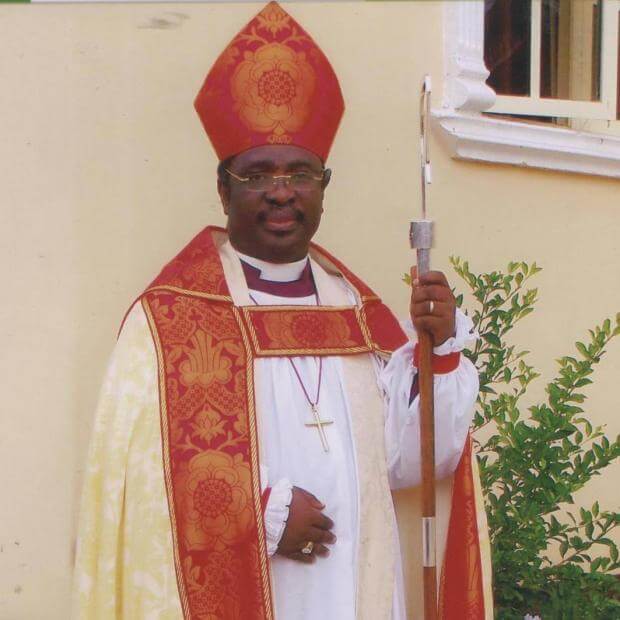 •Takes Over From The Most Rev. Dr. ADEBOLA ADEMOWO
•What City People Discovered About The New Bishop

The Anglican Church in Lagos now has a new Bishop for the diocese. He is The Rt. Rev. Dr. Humphrey Bamisebi Olumakaiye. He has taken over from The Most Rev. Dr. Ademowo, who is much older.

According to the Episcopal Synod of the Church of Nigeria (Anglican Communion) the particular election washeld alongside 4 others at the Cathedral Church of St Barnabas, Ilorin in the Diocese of Kwara, Kwara State in accordance with the church’s laid down rules and regulations. The event was free and fair.

A total of 161 Bishops participated and pursuant to the provisions of Canon V of the Constitution and Canons of the Church of Nigeria 1997 (as Amended), candidates were nominated after the advice from the diocese, which favoured translation, had been circulated and read. The procedure before every election in the House of Bishops is to appoint a team of returning officers to collate the results.

This was strictly followed with the Rt. Rev Sosthenes Eze, Bishop of Enugu North diocese, leading eight other bishops to perform this sacred duty. Only two candidates, Most Rev Michael Fape and Rt. Rev Humphrey Olumakaiye were duly nominated and seconded by highly respected members of the house without any objection raised against any of them. After the voting which was by secret ballot, the result was declared as follows: Most Rev’d Michael Fape 51, Rt. Rev Humphrey Olumakaiye 109, Absention – 1

By this result Rt. Rev’d Humphrey Olumakaiye, Bishop of Osun North East became duly elected for translation to the See of Lagos.

The Primate as the President of the Episcopal Synod statutorily calls for nominations, and after the voting and counting of votes by those responsible,
announces the results as submitted by the chief returning officer. Votes are cast, counted and results declared in the full glare of the general house explained the Episcopal Secretary, Rt. Rev. David O. C. Onuoha.

He got admitted into Immanuel College of Theology, Ibadan in 1988, where he obtained a Diploma in Religious Studies and Diploma in Theology in 1991 with distinctions. Between 1991 and 1993, he obtained his first degree in Religious studies from the University of Ibadan.

He also got his Master’s degree in Religious studies and Doctor of Philosophy (Ph.D) from the University of Ibadan. The Rt. Rev. Dr. Humphrey B. Olumakaiye was elected Bishop (9 years ago) on May 22, 2009, consecrated on Sunday, July 12, 2009, and enthroned on July 16, 2009, as the first Bishop of Osun North East Diocese.

Bishop Olumakaiye is an excellent scholar and sapient preacher of God’s Word. He is an Evangelist and a Revivalist, very charismatic, dynamic and resourceful. He is a Bishop with a shepherd heart, and a man with a ‘Midas Touch’. He is an astute and unassuming Administrator with an exceptional endowment of transforming array of ideas into reality. He is a builder, who has built several structures in what culminated into an Anglican Village in Otan-Ayegbaju, Osun State.

He has internationally accepted Theological books published by him, they are: (1) Anglican Women; Positions, Privileges and Prospects of Women in the Church (2) Inculturation and Decolonization of Oral and Liturgical Theology of the Anglican Communion, Nigeria. He was the Youth Chaplain for more than a decade in Ilesa Diocese before he was appointed the Youth Work Board Chairman. He is a great lover of youths.

He is now •The Secretary of the Supra West Board, Church of Nigeria, •The Secretary of the Proprietors’ Desk of Ajayi Crowther University, Oyo, •Member of the Board of Trustees of Pension and Gratuity of the Supra West Board, •Member of the Governing Council of Ajayi Crowther University, Oyo, •Coordinator, Prayer Convocation of Ibadan Ecclesiastical Province, •Coordinator, GAFCON 2018, Ibadan Ecclesiastical Province, •Chairman, 60th Anniversary of Immanuel College of Theology, Ibadan

The Rt. Rev. Olumakaiye was an Annual Guest Lecturer at St Luke’s Central Church, Birmingham, UK (2011-2015). He also attended the World Mission Conference in Derbyshire and University of Birmingham. In 2005, he and his wife attended a short programme on Church Music and Pastoral Care in Melbourne, London.

A Televangelist, Motunrayo Funke Olumakaiye now anchors the popular Television programmme “Women of Excellence” in ACNN and OSBC. She is very committed to Women’s and Girls’ work with unprecedented achievements to her credit. She was the immediate past Coordinator of the Church of Nigeria, Action and Outreach unit of the Mothers’ Union (2011-2017). She was also the Editor-in-Chief of ‘Women of Value’, an Annual Publication of the Church of Nigeria Women’s Organization for six years. She is a woman of substance and a goal-getter with an impeccable character.

How about Bishop Olumakaiye’s predecessor, the Most Rev. Dr. Ephraim Adebola Ademowo? We can tell you about him. He was born on 29th July, 1948 to the family of Chief Samuel Gbolade Ademowo and Mrs. Caroline Abosede Ademowo. His father was a veteran headmaster and educationist.

After his primary and secondary education in Lagos and Abeokuta, he attended Immanuel College of Theology, Ibadan from 1969 to 1972 for Ordination Course. He was made a Deacon at St. James’ Cathedral, Ibadan in 1972 and ordained Priest in 1973. The Most Rev. Dr. E A Ademowo graduated with a Bachelor of Arts Degree, majoring in Theology at the University of Ibadan 1977. Ultimately he earned by dint of hardwork his Master of Arts at the Obafemi Awolowo University Ile-lfe. He also obtained his Ph.D degree, through examination at the same University.

Immediately after ordination, he was posted to the Church ministry at Ilesha where, he served for nearly 30 years. Ademowo was preferred Canon at lIesha in 1981, Archdeacon in 1983 and consecrated Bishop of Ilesha at the Cathedral Church of Christ, Lagos in 1989. After 11 years at Ilesha as a Bishop, he was transfered to the See of the Diocese of Lagos in the year 2000 just at the beginning of the new millennium.

The Year 1999 was significant in many ways and quite unique. It marked the 80th anniversary of the founding of the Diocese of Lagos – the first to be so established in Nigeria. That year was also the transitional point in the turn of a century and the end of the first millennium. It was, indeed, also for the Diocese of Lagos, the end of an era, as it marked the formal retirement of The Most Rev. Dr. Joseph Abiodun Adetiloye as Bishop of Lagos, Archbishop and Primate Metropolitan of the Church of Nigeria; the election and presentation in the early part of year 2000, of the Most Rev. Dr. E.A. Ademowo to what was then known as Province 1 (Supra Diocesan Board West) of the Church of Nigeria (Anglican Communion).

The ‘return’ of Ademowo to Lagos Diocese and his assumption of duties at the turn of the millennium as both Bishop and Archbishop of Province One comprising all the dioceses geographically located in the Southwest and Midwest areas of the country was most significant and symbolic. For him and his immediate family members, it was a happy home-coming. For the larger family of God’s people, it was the beginning of a new wave of spiritual re-awakening and a consolidation of the CMS – inspired social initiatives in the complementing care areas of Health and Education.

In 2008, he was re-elected for another 5-year term as Archbishop of the Ecclesiastical Province of Lagos. Through the special grace of God on his life, the Archbishop continued to recieve laurels and awards. Among these were his investiture in 2006 as Honorary Fellow of the Nigerian Academy of Letters (FNAL ) and the conferment in 2008 of the prestigious national honour of “Officer of the Order of the Niger (O.O.N)” by the President of the Federal Republic of Nigeria, His Excellency, Umaru Musa Yar’Adua on behalf of the government and people of Nigeria.

His Royal Majesty Oba Sikiru Kayode Adetona, the Awujale of Ijebuland described the Archbishop as one of the illustrious sons of Ijebuland and a street in the GRA Ijebu-Ode was named after him in appreciation of his contributions. The Most Rev. Dr. E A Ademowo is married to Mrs Oluranti I. Ademowo with whom he has shared an undeniably fruitful ministry, joyful compassionship and family life. They are blessed with children.