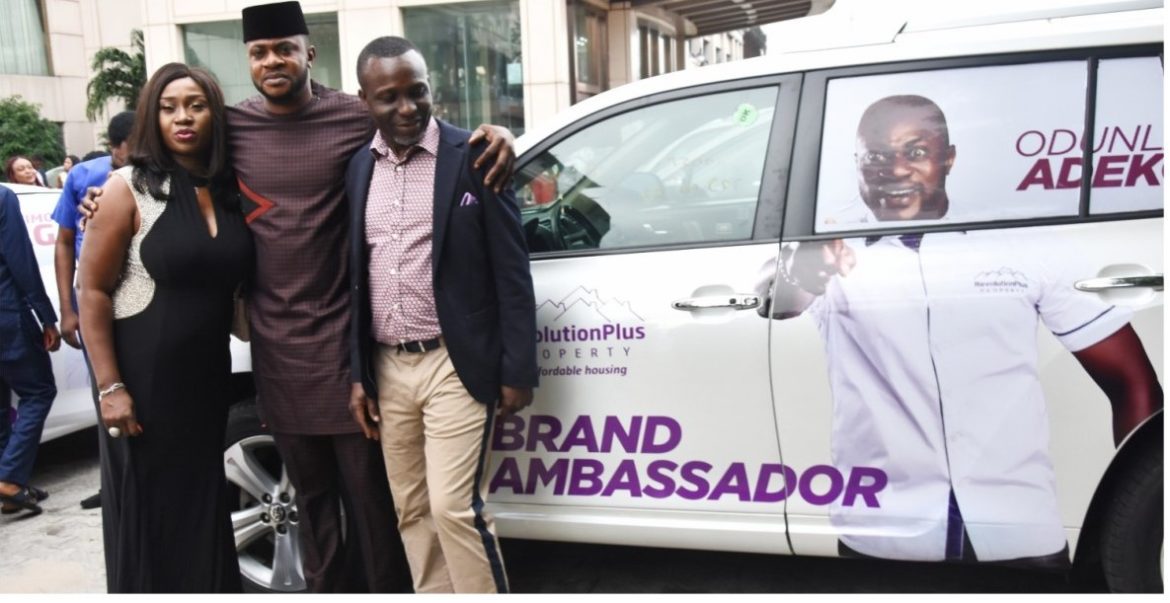 Saturday, 20th July 2019, was a day set aside by the popular real estate company, RevolutionPlus Property Development Company, to celebrate and reward its realtors, customers and brand ambassadors. The event took place at the prestigious Oriental Hotel in Victoria Island, Lagos.

The event was 2-in-1. It was a day the company unveiled another brand ambassador, Testimony Jaga, popular street gospel artiste. Not only was he unveiled, the existing brand ambassador, Odunlade Adekola, extended his contract by 2 years, with the company.  Aside from the normal realtors’ party, these are some of the activities that took place at the event.

The event started around 3 pm with opening prayer, followed by the Executive Director, Mrs. Tolulope Onalaja’s welcome address. She thanked everyone who has continuously supported the firm. She praised the MD’s performance and also acknowledged his tenacity and courage. She also, in brief, itemised what to be expected from the company.

The Managing Director, Dr. Bamidele Onalaja in his speech also reeled out the next moves of the company. “We have some new projects coming up which we are going to be unveiling. We just opened a new branch in Ibadan. And we are also looking at opening another two branches before the end of the year; one in Abeokuta and the other in Port Harcourt. And work has commenced to unveil these 2 new branches. We have been working, myself and ED to see how we can give out the best”.

He said further that, some of the realtors who have sold, and have met the target of the company would have the opportunity to travel to Dubai, UK, and Canada, and all expenses paid courtesy of RevolutionPlus Property”.

The official Compere of the event was Ajebo, a popular Nigerian comedian. He was highly impressed with his jokes, as he made sure everybody had a great time.

REVOLUTIONPLUS GIVES OUT CARS TO ITS AMBASSADORS

RevolutionPlus Property on that day gave out 2 luxury cars to its ambassadors. Popular Nollywood actor, Odunlade Adekola, got the latest Toyota Highlander SUV, while Testimony Jaga got a luxury Toyota Camry, all branded. Apart from all these gifts, some of the realtors also won themselves all sorts of gift items. Some of them won Refrigerators, Phones, Typewriters, Washing Machines, etc, while the majority also won trips to Canada, Dubai, all expenses paid courtesy of the company.

Shortly after the programme, City People’s Senior Reporter had a short chat with the MD to explain the motive behind the company’s bold step in the real estate industry, and why it has to give out cars to its ambassadors. He said, “we now have a new ambassador. Odunlade Adekola has just signed another 2 years contract extension with us. I’m excited about what we did today. Odunlade has done well and that’s why the management has decided to renew his contract. And to say thank you to him, we say let’s give him a brand new SUV. We also signed a new ambassador, Testimony Jaga, a gospel artiste.

So, our plan is to take over and extend to other states, so that everybody can have a house through RevolutionPlus Property”. Another person who also spoke to City People is brand ambassador, Odunlade Adekola, who expressed his joy for the car. According to him “I wasn’t expecting this. I didn’t know I would be given a car today, but I thank God for this. I took RevolutionPlus Property like mine. I love the MD; his humility is what I like most. I want to forever remain with the company and I will continue to give my best to promote the image of the company. When I signed with them a year ago, you asked me how will I go about it, but thank God today, I have been able to prove what I can do. Prior to the time they signed me, I didn’t have any real estate experience, but I always believe I can do anything if given a chance. I’m so grateful for the car”.

Mrs. Tolulope Onalaja, the Executive Director of the company also told us why they had to do what they did. “We noticed that Odunlade has done well. We noticed his passion. There was a day he told MD that I’m not working for you because of money; money is not my motivation, I just like your person. He has taken the brand like his and we said to ourselves that, what other way can we appreciate him and that’s why we gave him that SUV.

Did Testimony Jaga know he would be getting a brand new car from the company on that day? He said, “I’m a man of faith. I believe every good thing on this earth belongs to us. The MD has always been supporting me. He loves my music”.

5 Locations In LEKKI Where Celebs Buy...