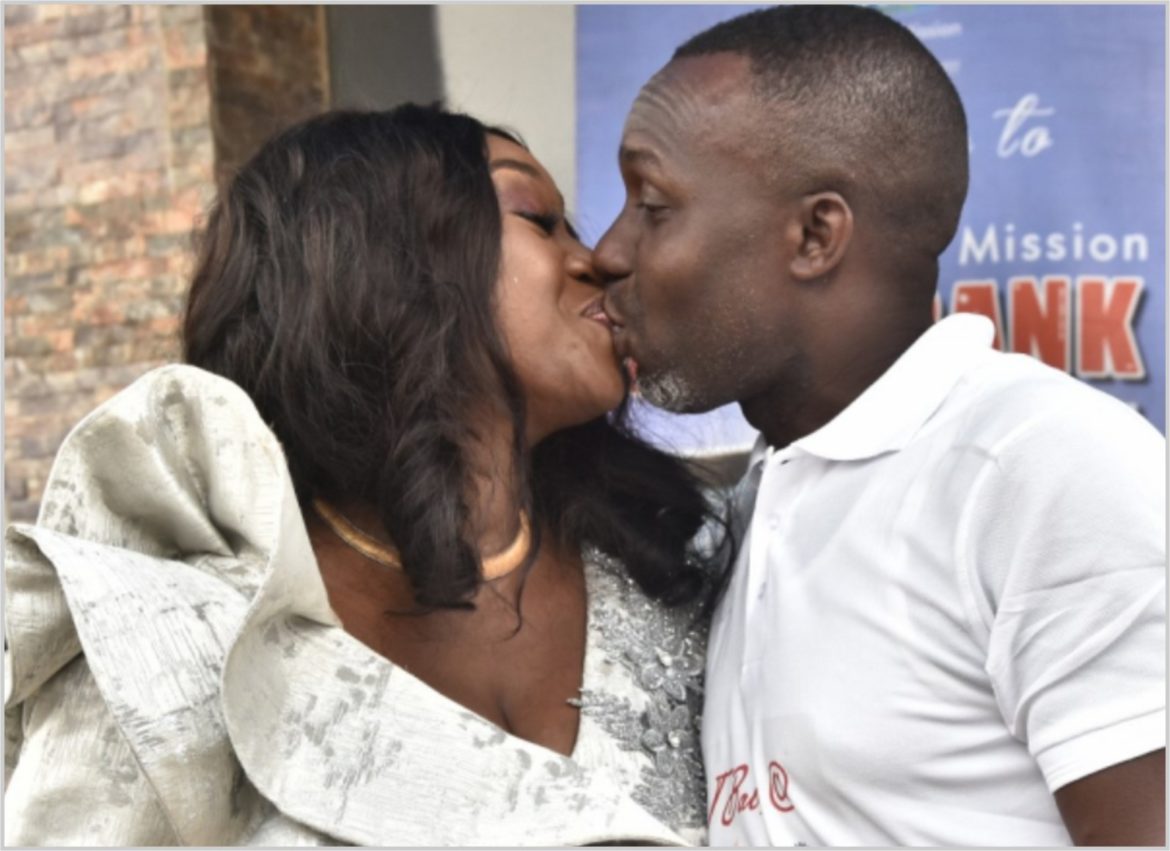 •Spends Over N80 Million On Her 3 Day 40th Birthday Bash

A Google search for the best Nigeria’s birthday celebration in February 2020 will surely give you T Baby @ 40 birthday celebration, which spanned the whole of last 2 weekends. It was the celebration of 40th birthday of Mrs. Tolulope Onalaja, the pretty wife of Dr. Bamidele Onalaja, MD of RevolutionPlus Property Company. She also doubles as the Executive Director of the Company. Below is the account of the 3-day celebration by ISAAC ABIMBADE (08155107955).

On 14th February, 2020 (Valentine’s Day) was a memorable day for Mrs Tolulope Onalaja, the wife of RevolutionPlus MD. This pretty lady of substance clocked 40 in grand style and her husband ensured she was well celebrated. Her husband put up many surprises to make the 3 days colourful.

Since last week when the event took place, many celebrities and popular social media handles have been talking about it. The birthday is still trending on Instagram and Facebook.  It’s was also in all the major tabloids.

Prior to her big day, she had planned to empower 40 widows with 50 thousand naira each. She also said, she would give foodstuff to orphanages and also provide free medical checks.

She also told City People that she would celebrate it with friends, family members and well-wishers across the country at a popular Lagos Event Centre, Landmark. These were all her plans and calculation for the 3-day birthday celebration, before husband, Dr. Bamidele Onalaja, however, decided to put the icing on the cake.

On Friday she clocked 40 which coincidentally was on valentine’s day, her husband, Dr. Bamidele Onalaja gave her the first surprise in the early hour of that day, as he invited some key close friends, family members into their Lekki home to wish her happy birthday, as she was waking on that beautiful day. In that beautiful morning, the husband presented a special gift to her and another beautiful ring to renew their love. Her husband joyfully professed how he loves his wife. “I love my wife so much and I want to do a re-proposal  of my love to her, and that surely got many saying wow”.

Short after that, they (wife and husband) went to their Ikeja head office where friends, family members and staff were eagerly awaiting them. She didn’t expect what she saw when she walked into a grand reception, and saw the popular music star, Teniola, emerge from the blues to serenade her with some of her hit songs. The celebrator was elated and highly surprised because she wasn’t expecting to see Teni, but her husband had it all planned to make her day special.

Don’t forget also, it was also the day she empowered 40 widows with a cash gifts of N50,000.00 naira each. As if that was not enough, on that same day, her husband took her to a new club in Ikeja, Cubana Montana, and a special terrace of the club was assigned to them where the well-wishers and close friends came to celebrate her. She was highly delighted and elated seeing her husband giving her special treats.

On the second day, Mrs. Tolulope Onalaja didn’t disappoint in her promise. She had earlier said she would provide free medical checks for everyone interested and she did. That alone cost millions of naira.

In the same day (evening)  her husband, Dr. Bamidele Onalaja, who had it all planned out again also pulled another big surprise, as he treated his beautiful wife on a boat cruise. On that day, the husband had secretly invited friends, family, well-wishers and members of staff to converge at Fiki Marina, opposite Law School, Ozumba Mbadiwe Avenue, Victoria Island, where the boat will take off. The dress code for the event was all-white.

Exactly 6 pm on that day all was set for TBaby @ 40, as her well-wishers had already gathered. The giant boat called Fiki Cruise took off at 6 pm. It was a 2 storey boat that accommodates over 100 people.

On the first floor, guests were entertained with food and wine and shortly after 2 hours on the water, guests were taken to the upper deck where the DJ Terry Tee, popularly called Mr. Spinbad serenaded the celebrator and guests with melodious songs.

Friends from USA, UK and other European countries were not left out in the boat cruise that took off from Victoria Island and sailed through Lekki, Ikoyi in Lagos. It was a magic moment for the celebrant. She was at a point on her knees praising and thanking her husband for all the surprises she was getting. She thanked her husband for giving her freedom and voice to express herself and was at a point in tears. She was in tears of joy as the surprises were falling in torrents. On the same boat, the couple were seen displaying affection, as they both kissed and cuddled. Let’s also tell you that, the husband also sprayed her hard currency on the dance floor.

Let us tell you that, food and exotic wines were served and it was a thrilling experience for those who witnessed it.

The boat which took off around 6pm returned back to base around 11pm and it felt like an hour cruise because of the fun and razzmatazz that were on display.

Fiki Marina is number one cruising boat in Nigeria, whether you just want to charter or going on a boat cruise. It’s indeed true that life is better when you are on the water, but it was even better for TBaby, as she enjoyed her day with well-wishers and family. It would forever remain a remarkable moment for her.

The 3rd day, 16th February, 2020, would always be the moment of reflection and reference for the guests who witnessed the epic moment and also to the celebrator who was highly celebrated by the creme-de-la-creme in the society.

The beautiful event which took place at the prestigious Landmark Event Centre, on Victoria Island, Lagos, attracted high profile personalities who stormed the venue in their white outfits.

The guests include Nollywood stars, celebrities, politicians, real estate gurus and top media personnel. The hall that was booked for the event was decorated in white, while A-Z Event took charge of the planning.

The whole of Victoria Island was on lockdown as guests thronged en masse to the venue where the queen of real estate, Mrs. Tolulope Onalaja  celebrated.

The red-carpet started around 4pm, while the event itself kicked off at 6pm. On the bandstand was Shuga Band, while AY Comedian and Warri Pikin co-hosted the event. It was like the icing on the cake when it was made known that DJ Xclusive was on the wheels of steel.

GRAND ENTRY OF THE CELEBRATOR  WAS SUPERB

The grand entry of the celebrator was beautiful. When the host of the event, Warri Pikin, called in the celebrator, she was joined by her husband, friends and family members, as she danced into the hall, while DJ Xclusive dished out melodious songs to serenade the birthday girl who was beautifully dressed in a well-cut-white gown, made by CEOlumini and that sat well on her imposing body-figure. The husband was in a traditional white attire (agbada), and it was a perfect fit on him.

Popular comedian, actor, producer, Ayo Makun, popularly called AY comedian, was the host and Warri Pikin was co-host too. The two funny personalities really complemented each other as they ensured the event went smoothly.

A lot of people would still be wondering why there were so much attention and celebration since Friday when the event kicked off. The celebrator’s husband said he was highly delighted to celebrate his beautiful wife.

According to him. “She has supported my dream, vision, ambition since I got married to her. You could see how slim I was when I married her. You would notice my neck was very tiny when I took that photograph, years back. She has worked tirelessly to make me who I am today. She has supported my dream. We have conquered every challenge together because she is prayerful. I thank my in-law for giving me this wonderful woman. I also thank my family members who are here.

I remember how I would trek from LASU to go and collect garri from my siblings in Ota”.

“When I left banking  about 6 years ago, I was jobless for a year. I resigned from my job at 40 and my wife, who was working with a small company then supported me althrough. She supported me with what she earned.

“When I told her I wanted to start real estate, she supported me. One of her relations,  Ayaba, gave us N800k to help us start the business. So, I would continue to celebrate her. She was 24 when I married her and I am happy she is 40 today and I pray to celebrate her 60, 80 and more.

Dr. Bamidele  Onalaja ensured the 3-day event went smoothly as he pulled one surprise after the other, for the 40th birthday of his lovely woman.

Popular disc jockey, Rotimi Alakija, better known as DJ Xclusive was paid to serenade the celebrant TBaby @ 40. The DJ, record producer, and recording artiste didn’t disappoint at all, as he ensured everyone enjoyed their stay.

The UK-born DJ was in his usual jacket, looking fresh and stylish in his pink colour jacket.

Popular singer, Shuga Band, is a musical group that supplies live music to corporate bodies for product launch, end of the year party and individuals who want to be celebrated. So, on 16th February 2020, he was on the bandstand and he was highly electrified, as he dished out his thrilling songs for the birthday girl, Mrs Tolulope Onalaja.

Akin Shuga, popularly known as Shuga Band, is a toast of celebrities and high profile personalities who want to have a special and colourful event. On that day, he was the official artiste at TBaby at 40, guests weren’t surprised, and many were very happy. This talented music icon didn’t disappoint at all as many were on their feet throughout the event dancing to his melodious hit songs.

Give it to the celebrator’s hubby, Dr. Bamidele Onalaja, as he sprayed his loving wife, hard currency (dollar) for about 10 minutes. He did not only spend dollars, but  100 dollar denomination note. The spraying spree was greeted by a loud ovation and applause as celebrities and other attendees attest to his love for his wife.

Mrs. Tolulope Onalaja’s 40th birthday has come and gone, but many would still remember the styles and beautiful outfits of the celebrator, which became another talk of the town throughout the week of the event.

The launch of Angelic Lingerie Limited, a special clothing line was launched which deals in women undies of various types.

CELEBRITIES WHO STORMED THE VENUE

We can’t forget the presence of Odunlade Adekola, who was one of the early comers to the event.

He was in his white traditional attire and a lot of his fans rushed him to have photographs with him. He also stayed throughout the event. Let’s also inform you that, he is the longest-serving Ambassador of RevolutionPlus Property Company.