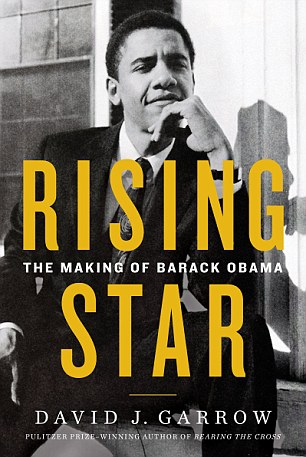 A new biography of Barack Obama is laying bare his life since he was born, disclosing how he liked to party with pot and cocaine before he married Michelle.

Barack Obama slept with his girlfriend, Genevieve Cook on their first date, before she wrote him a poem about their ‘fucking’ and called their sex ‘passionate’, a new biography of the former president reveals.
Obama, a new Columbia graduate who was working for a firm which prepared financial reports at the time, made dinner for Cook at his apartment in Manhattan two weeks after meeting her at a New Year’s Eve party and handing her his phone number.
It was the start of a relationship which is one of a series revealed in “Rising Star: The Making of Barack Obama”, which is to be published later this month.
The 1,078-page biography is the most comprehensive work ever on Obama and the first to be published since he left office.
It was written after exhaustive research by Pulitzer-prize winning biographer, David Garrow, and also reveals how he asked another woman to marry him – and continued a relationship with her while dating Michelle, his wife.
Cook was 25 when she met 22-year-old Obama on New Year’s Eve in 1983.
Australian-born Cook was living in her mother and stepfather’s Park Avenue apartment at the time, but had been brought up around the world, including – like Obama, Indonesia – as her father was an Australian spy and diplomat.
She wrote about it in a private memoir and said that at the party ‘I remember being very engaged and just talking nonstop’ with Obama.
‘The thing that connected us is that we both came from nowhere – we really didn’t belong.’
Their first date involved more than talk however, with Obama cooking at the West 114th Street apartment he shared with two other roommates.
‘Then we went and talked in his bedroom. And then I spent the night. It all felt very inevitable,’ she wrote in a private memoir, revealed by Garrow.
She spent the night again with him a few days later and rated him highly in bed – even writing a poem to him saying: ‘B. That’s for you. F’s for all the fucking that we do.’
Garrow reveals that she said: ‘Sexually he really wasn’t very imaginative but he was comfortable. He was no kind of shrinking “can’t handle it. This is invasive” or “I’m timid” in any way; he was quite earthy.’ Genevieve Cook was an Australian-born 22-year-old who was Obama’s first post-college lover. The two took drugs together and slept together on their first date
Their relationship appears to have been deeply s*xual, with her writing that ‘all this f***ing’ was ‘so much more than lust’ and also saying in her diary: ‘Making love with Barack, so warm and flowing and soft but deep – relaxed and loving – opening up more.’
She also wrote in her diary about ‘passionate sex’, the book says.
But the couple also used drugs and Cook reveals that Obama was still a cocaine user when they were together.
He would spend time with other friends – Hasan Chandoo, Imad Hussain and Sohale Siddiqi, who he had been friends with at Occidental College, in Los Angeles – and Cook said the trio was taking ‘lots of cocaine’.
They were far more prolific users than Obama, who she said probably preferred staying home to read than taking the drug. Chandoo – who was later to become a fundraiser for Obama – was the leader, the book claims.
‘For every five lines that somebody did, he would have done half,’ Cook said. The book also notes that Cook and Obama would smoke pot but only at parties and records one time when during tension in their relationship she wrote in her diary that they went to a party and got ‘high’ on cocaine.
That Obama was still using cocaine in his early 20s is a significant revelation.
He had previously only disclosed that he used it as a teenage student.
The couple split in June 1985, after a year and a half together, the book says – and when Obama came to write “Dreams From My Father”, he created a composite girlfriend from the early 1980s.
The book – Rising Star: The Making of Barack Obama is published May 9 and is available for pre-order now.
Source: DailyMail UK
Rising Star: Ex-US President, Barack Obama’s Sex and Drugs Past Laid Bare in New Biography [Must Read] was last modified: May 4th, 2017 by Arinze Ago