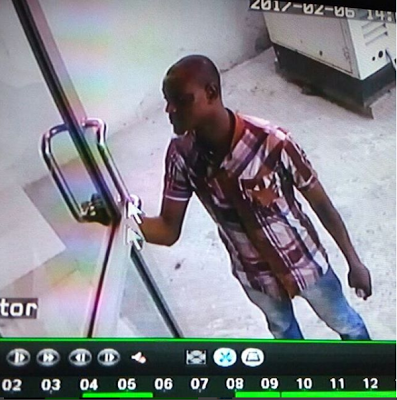 Instagram user, Nylah shared this photo of an alleged robber whom she said came to her office disguised as a NEPA official only to steal her mobile phones when he lured her outside the building. Read what she wrote below;

“I am not one to do this or share unverified information but since this happened to me I am going to share it. This criminal walked into my office under the pretense of being a Nepa official yes i asked for identification and he said it was in his truck that they were doing some work and noticed that the building next door had wires hanging into ours and he needed to verify the connection . He had a screw driver and folded wires in his hand. stole my phone from my desk after luring me out. He kept insisting we should turn off the generator because he suspected we had cctv (thankfully I didn’t) guys be on the look out and don’t doubt your instincts because I did. Too many lazy hungry people out there. If he needed something to eat, I would have fed him from the restaurant easy. Lesson learned.

Robber who disguised as NEPA official lured lady out of her office and stole her phones was last modified: February 8th, 2017 by Reporter