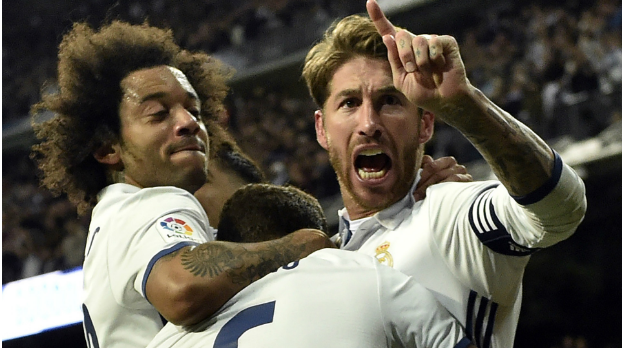 Sergio Ramos could be tagged new Real Madrid savior now as he was the hero yet again with a late header to secure three precious points for Los Blancos at home to Betis on Sunday.

However, goalkeeper Keylor Navas is now playing for his future at the club after two terrible blunders in the first half.

Navas was extremely fortunate to avoid a red card in the first period when he came charging out of his box to intercept a long pass but missed the ball completely and took out Serbian midfielder Darko Brasanac.

The Costa Rican was Madrid’s last man and should have received his marching orders.

Referee Antonio Mateu Lahoz waved play on and Navas survived, but the goalkeeper was in for an even worse moment just minutes later when he let Toni Sanabria’s timid shot slip from his grasp when it should have been a routine save.

There were jeers for Navas when he touched the ball after that and his confidence seems shot following a number of bad mistakes in recent weeks.

In fact, the Central American has made more errors leading to goals than any other Liga player this season in all competitions (five).

That is a damning statistic and with Madrid now able to register new players in the summer after their transfer ban was cut in half, the club are looking at alternatives to the Costa Rican, including Manchester United’s David De Gea and Chelsea’s Thibaut Courtois.

It could have been worse, too, because had Navas been sent off, Real really would have had a hard time winning this game – and Navas would not have been there to make a superb save in the dying seconds which brought applause from the crowd at the Santiago Bernabeu.

Madrid did have trouble turning this around even with all 11 players on the pitch, needing a header from Cristiano Ronaldo later in the first half and more heroics from Ramos with the winner after the Portuguese had incorrectly seen a strike ruled out for offside.

Ramos rose to head home after 81 minutes and score his 10th goal of the season for Real in 29 appearances.Most of them have been important, too, including the one against Napoli in the Champions League last Tuesday (when he was unlucky to have a second given as an own goal), the leveller in the Clasico clash at Camp Nou in December, the equaliser in the dying seconds in the UEFA Super Cup against Sevilla in August and also the winner at home to Deportivo La Coruna before Christmas.

Deportivo had given Madrid a helping hand earlier on Sunday by beating Barcelona 2-1 at Riazor and a win for Los Blancos meant they would return to the top of the table by two points – while they also still have a game in hand over their fierce rivals.

So it was a vital victory in the end for Zinedine Zidane’s side, even if the performance again was less than impressive with James Rodriguez unable to sparkle on a rare start, Alvaro Morata willing but ultimately ineffective and Isco on one of his more frustrating nights.