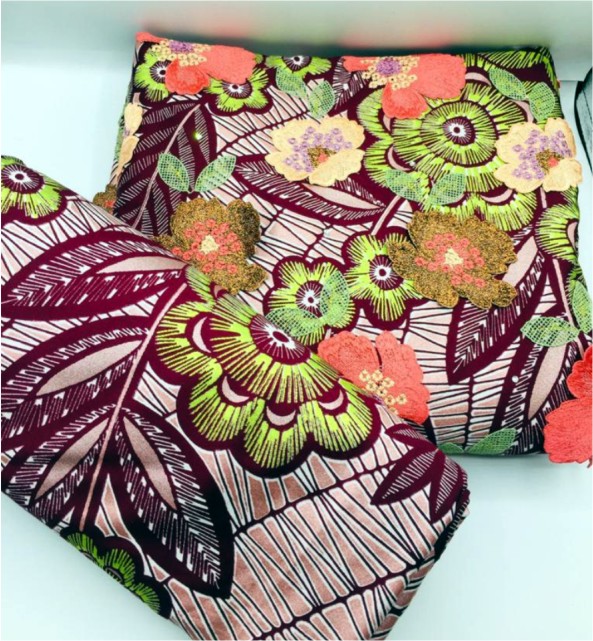 Do you know there is a new brand of Ankara fabric called HKG Vlisco? This type of Ankara has become the new trend among big babes, and it has also gone beyond the regular Colourful Print Sold for 7 Thousand Naira for 6yards and there is a new Ankara which many Rich Celebrity women now wear to parties called “HKG Ankara” and it is sold for 550k for 6 yards while the old design is sold for 350k for 6 yards.

While an Average African Print Lovers will ask you just ask how True it is that an Ankara Print be sold for 550k for 6 yards. Many rich celebrity women of style and panache are buying it in 6 or 5pieces because of its Finennse and class. Well, HKG Vlisco Ankara is not the Regular Ankara Print and other Ankara Print produced locally. It is an International Print strictly for the rich. It can not be pick as Aso-Ebi and only selected celebrity women can afford to wear HKG Ankara because of its Price  It is a high-end Product for female celebrity women who will buy it without raising an eyelid.

Why is HKG Ankara sold at 550k? As we said, it is a Luxury Brand for only a selected few. It is made from finest of Ankara Print produced in Netherland called “Vlisco” while it is later transported to Swiss where HKG is produced. HKG Ankara is a Misture of Lace produced by HKG and Ankara produced by Vlisco in the Netherland.

Speaking with a Northern Luxury Ankara Merchant, Hajia Hafsat Albdulkadir TANIN, Ceo of HDGvliscofabrics on Toyin Street. She reveals that HKG Ankara is dated over 10 years ago and it is very popular among the Northern rich. Her words “ HKG Vlisco is very popular among many Northern rich. We the Northerners are used to wearing Luxury Ankara. Even our bride wear HKG Vilisco. Before dollars rise. We used to sell HKG Vlisvo Ankara for 300 Hundred Thousand but now the latest collection of HKG Vlisco Ankara is sold for 550k while the cheapest you can get is for 350k. You can not get HKG Vlisco at every store, only a few of us sell HKG Anakara in Lagos, but there are many Northern Ankara stores that sell it because it is extremely expensive. Young Northern Celebrities Wear HKG Vlisvo Ankara because they know the worth”.

Asking her about why it is expensive: she revealed that it is because it is produced abroad. It is a product of 2 international companies. HKG is produced in Swiss. They are lace producers while Vlisco is the high-end product of the Netherland. Imagine when you have to travel to 2 countries to get the final finished product. There are many reasons why celebrities wear HKG Vlisco Ankara. You are sure of not seeing it on anyone when you wear it to any function. The designs are also not regular. It is an Ankara that has Luxury Lace Trimmings called ‘Eti Aje”. It doesn’t fade. You can have it and be sure it will last a lifetime. Despite being Ankara, people know that it is not regular. So it gives you full Confidence and Finesse.” She said.

One celebrity who was also sighted rocking HKG Vlisco is Otunba Folashade Adesoye, the Number 1 Diamond Merchant in Lagos. She has always been a woman of style. So also Is Olori Aramide Elegushi, the Queen of Elegushi DYNASTY. She was spotted wearing it at Lagos Event. What about Hajia Olaide Olohunwa ? She Sell Ankara HKG and wear Ankara HKG. She was spotted in one during her last birthday Photoshoot.

How will you know HKG Vlisco Ankara? It is a mixture of Swiss HKG Lace, mix with Colourful Ankara. The end of the Ankara always has lace trimmings. They come in colourful colour. Ankara was originally manufactured by the Dutch for the Indonesian textile market, however, the prints gained significantly more interest in West African countries because of the tribal-like patterns. Ankara is formerly known as Dutch wax print by African Print Dutch Company Vlisco.

READ ALSO: WHERE ARE THESE IBADAN BIG BOYS NOW?

Where Is This Beautiful Lady Now? – She Introduced CLARINS Products To NIGERIA