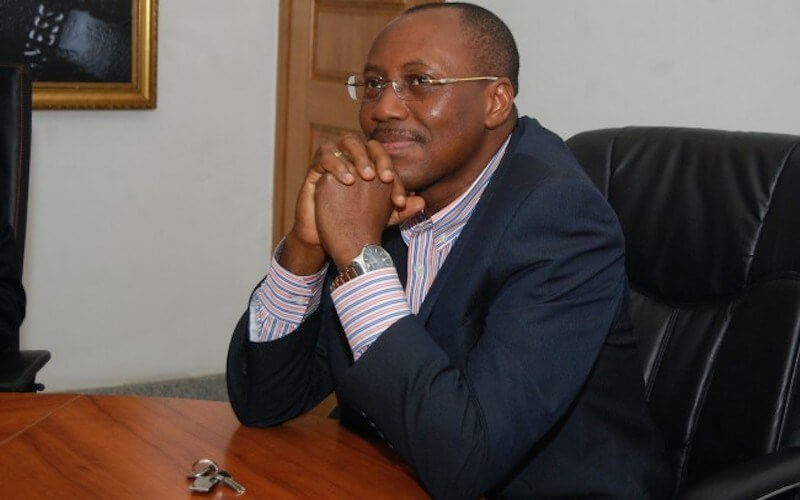 If you meet Otunba Seni Adetu in his elements, you won’t be in any hurry to leave his presence. This is because this impressively educated titled chief from Remo land is as engaging as they come. He will charm you with his intellectual depth and leave you no other option than to be willing to sit back and draw from his wealth of knowledge and experience. And he indeed has an intimidating career profile. He has had an illustrious 30 year career at Coca-Cola and Guinness Nigeria Plc where he resigned as MD/CEO of the multinational company.

For the records, Otunba Seni Adetu was the first African to be appointed Marketing Director for Coca-Cola in Nigeria. He has since left Guinness Plc to set up his own outfit, Algorithm Media Ltd, where he doubles as the founder and Group CEO. And within a short while after it began operations, Adetu took off on a blistering start, sealing a multimillion naira partnership deal with WPP, the biggest in the industry.

You couldn’t possibly ask for a smoother transition after retirement. But this gentleman will be the first to admit the journey hasn’t been totally nice and rosy. He says he’s gotten to where he is today through tenacity, hard work, resilience and of course, he never forgets to add, the grace of God. He attended the recent City People’s Awards For Excellence held at the Balmoral Event Centre, in Oregun, Lagos. City People’s Senior Editor, WALE LAWAL, had an engaging interview with Otunba Seni Adetu in which he spoke about life after retirement. And yes, we were lucky, Otunba Seni Adetu was in his elements. Enjoy the excerpts.

I would like to start, sir, by saying you’re always looking young, how do you always manage to look ten years off your age?

Oh, thank you. It’s the grace of God. And in any case, in another few weeks, I will be fifty-five. What do I say? It’s God’s grace and nothing more than that. We thank God always.

Your wife turned fifty some couple of months back and you celebrated it big for her, how did you feel seeing the woman you’ve known since her youthful days turning fifty right in your hands?

Oh, I feel fantastic. She was just about nineteen when I met her. And so, thirty-one years on, we’re still waxing strong together. Like I said in one of the adverts I placed for her in celebration of her birthday, she has maintained her panache, her poise and her presence. So, I’m delighted for her. God has been good to the family and we just need to continue to celebrate God. I’m happy with the way her birthday celebration went. I felt good. A lot of friends were there, including people that you would refer to as celebrities. They all turned up for her, and for me, as the host. So, I’m really delighted and grateful to God.

One thing that has always struck me about your personality is your simplicity. You relate to people like someone who has absolutely no idea how much substance he has and is made of. How are you able to always carry yourself with such humility despite your humongous achievements, sir?

We thank God for that. It’s all to do with the upbringing. I grew up in a family where my mum was very clear that all that mattered in life was humility and that when you’re humble, there’s no limit to what you can achieve. She would always say it that she prefers the man who sits at the back of the church and is ushered to the front than the one who walks into the church and sits in front and they tell the person we’re sorry, we’ve reserved this place for some VIPs. So, God has been good. The two things I value most in life are humility and focus. Just set your eyes on the end results, and let it guide everything you do. So, here we are today, God has been good to me and my wife, and l really thank God for that.

Before we go into life after retirement from Guinness, your marriage is precisely how old now?
We got married in 1990, this year we’ll be 28 years in marriage. We celebrated our 27th last November, just a few days before her birthday. We are eternally grateful to God, I can’t say enough about how good God has been to us.

What would you say has kept the marriage going all these years?
We’re friends to start with. We’re companions. We’re very authentic in the marriage in the sense that if anyone is not pleased with the other, he or she is quick to tell the other person. With us, there is no holds barred, we’re very open, very authentic. Secondly, I think we’re very selfless. Everyone is looking out for the other and watching the other person’s back and I think that’s one of the key factors why we’re where we are today. Those are the things that have been keeping the marriage going and we’re very grateful to God.

When people see your wife, sir, they see a woman of style, they see a beautiful, sophisticated woman, a woman of panache and intellect, but as your wife and mother of your kids, what kind of woman is she?

She’s not just a beautiful woman on the outside, she’s also very beautiful inside. In fact, I think she’s even more beautiful inside than she is outside in the sense that she is very Godly. I mean there are times I wake up early in the morning and I’m hearing her praying and shouting my husband, my children and speaking in tongues. So, I think that on the inside, she is an amazing woman. She is selfless to the extent that the most important people to her are her immediate family, that’s number one. Number two, I have never seen a more determined woman in my life.

Once she sets her eyes on something, she will drive herself all the way to delivering it and I think that is also something that should be appreciated in her. But the most important thing is that in spite of her intelligence, remember we’re talking about somebody who’s a Chartered Accountant, an MBA holder, she was actually the best student in her faculty upon her graduation in the University, with all of that, when she’s in the house, at home, she never forgets that, first and foremost, I’m the wife and mother of this home and it’s not about the razzmatazz of the environment and I really do appreciate her for that.

How have you adapted to life after retirement, sir? How has it been after you left Guinness, adjusting to life without the normal waking up in the morning and getting ready for work kind of lifestyle?

Well, it’s been fantastic. In fact, my wife tells me I’m busier now than I was to the extent that, a couple of years ago, I set up shop, a marketing communications outfit, so I own an advertising agency and a media agency. I’m actually partners to the biggest in the world, WPP, and they don’t come any bigger than that. But on top of that, over the last two years I’ve been getting board appointments, about four of them.

I’m on the board of Fidelity Bank, I’m on the board of Tower Aluminum, and recently I was appointed by a pensions fund company, Apt Pensions as a board member as well. So, between my day job, managing those two companies, advertising and media, then serving on the board of about four, what you call blue chip companies, everyone says I’m busier than I was as MD of Guinness.

How did you prepare for this incredibly smooth transition? I’m even surprised right now to find you’re also into public relations, marketing and stuffs…

A lot of people ask me same question. To God’s glory, what they say is that the transition has been fantastic. I spent thirty years with multinational companies being MD of Coca-Cola, West Africa, MD Guinness, Ghana, MD Guinness, West Africa, MD Guinness, Nigeria and all of that and typically, when people come out after such a long time it takes a while to readjust. In my case, it was just as if God already had everything laid out for me. It was like I finished on a Friday and by Monday I was back to work. In terms of how I got into marketing and stuff, remember that I grew up in marketing.

I was actually the first African to be Marketing Director for Coca-Cola in this country. And over the years as I developed my marketing knowledge, I got to meet people. So, even what I started now in partnership with WPP, the biggest in the industry, I think it’s also a reflection and outcome of the good things that I’d invested in the industry.

That’s why I always say to people, take care of today, so that tomorrow can also take care of you. Meaning that, today, be very careful of what you do today and who you are today because when the time comes, it’s those relationships that you would have to lean back on to come good for you. So, I’m very grateful to God.

How would you compare life then with now that you’re on your own and you probably have more control of your time…
(Cuts in) Exactly. So, the difference is that I’m in more control of my time now, but potentially I can make more money. I haven’t said that I’m making more money, but to the extent that if I put half the effort I put into working for multinational companies, into my own babies, my companies, and I complement that with all of these four board appointments, then I should really be good. I should be even better than I was. All I will say is that God has been marvelous and if I had my way, I will wake up every day just rolling on the floor and thanking God.

How I Set Up My Outfit After Leaving GUINNESS –Otunba SENI ADETU was last modified: April 8th, 2018 by Wale Lawal