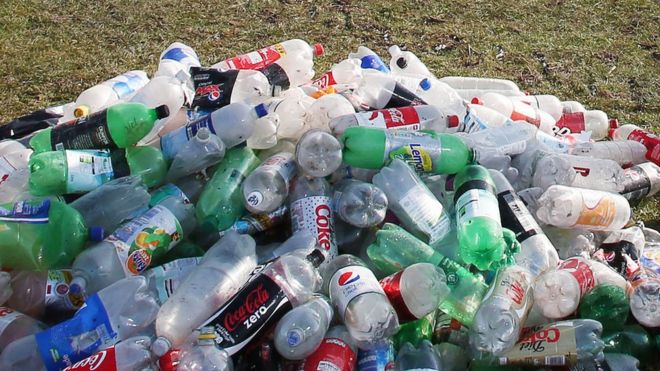 Though it sounds very strange but it’s very true that an agreement has been reached between parents of pupils attending Morit International School, Ajegunle, Lagos, and the school management to pay their wards’ fees with waste plastic bottles.

This became possible after the school adopted the RecyclesPay Education Project, an initiative of African Clean Up Initiative (ACI), an environmental non-governmental organisational in Lagos.

The school management embraced the initiative to ease the burden of parents finding it hard to pay their wards’ fees.

Over 25 parents of the low-income school have reportedly embraced the initiative whereby parents bring plastic wastes on designated days.

Wecyclers, the recycling company attached to the project, comes to collect the plastic bottles after getting a substantial amount of the plastic wastes. The amount given to parents are determined after weighing what each of them has brought.

Speaking on the development, Partrick Mbamara, Proprietor of the school, described the effort as a welcome initiative, as it is helping to mitigate the financial burden of many parents.

“It is helping to cushion the financial burden of parents in the school. We have a history of parents finding it difficult to pay each term school fees of N7,500,” he said.

“The money from the PET bottles is not much but it balances for what the parents can pay. My staff and I are happy with this initiative. It has improved parents’ payment of school fees and it teaches the children how to manage their waste and promote a cleaner environment.”

Stressing the significance of the initiative, Alex Akhigbe, Chief Environmental Officer of the ACI, noted that the money realised by each parent might look small but it is of value too. He explained that a kilo of the sorted palstics goes for N20 to N25, adding that little drops of money realised help make up for the balance of the school fees.

“PET bottles in the past were seen as waste but they are not anymore,” he said.

“Parents can raise money from collecting them and making them available to recyclers. They in turn convert them to other products usable by man.

“The recyclers weigh the plastic bottles and pen the kilogramme each parent brought. A kilogramme goes for N20 to N25 per kilo, depending on the recycler. If a parent comes with 10kilo, he or she will get N200 to N250. It looks like a huge effort is required. However, it’s a valuable to the environment and parents struggling to pay their children’s fees.

“Wecyclers come two times a week to collect the sorted waste from the parents. This is to encourage parents who do not have space in their homes to be storing the waste.”

The project, which started last year, was first introduced to Morit International School, Agege, but more schools across the country will soon embrace it.

10 Weird Sexual Fetishes You Should Know...

See The Top 10 Best Universities In...