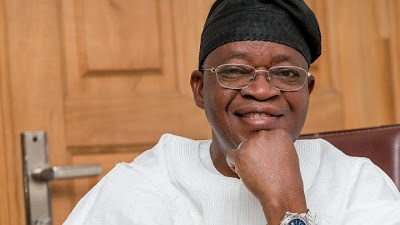 But over the last one year, Gov. Oyetola has surprised all the doubting Thomases. He has painstakingly run the state and has returned Osun State to the path of Stability, without making a song and dance of it. How did he do it? His Information Commissioner, Funke Egbemode told City People recently spoke on how Gov. Oyetola has confounded his critics. She was our Guest on City People Instagram Live with Publisher, SEYE KEHINDE. She revealed how this easy-going man runs the State. Below are excerpts of the Live Chat.

How has it been since you took up your new role as a Commissioner?

I am seeing life in a different way. I am also seeing governance from the inside, I am seeing governance in a serious way. In the newsroom, there are production days: days full of pressure. Now, handling the media of an entire state means every day is production day. I had found out that whether it is at 2 am or 2 pm I am on duty. There are no weekends here, managing the media of Osun State.

So, I am a Daily Editor, I am a Weekend Editor and also a PR Person (laughs). So that is the difference because governance is totally different. Doing government media is a whole different cup of tea.

Let’s talk about Mr. Governor, how is he coping, running the state?

Working with Gov. Gboyega Oyetola is like being in a school, a different kind of school. The governor is a University that has many faculties. We learn different things from him. One big lesson I have learnt working with him is patience. He is very very painstaking. He thinks things through. He listens to advise. You know being governor, advice will come from different places and different people.

So, all his decisions are informed, and when for instance I go to him and ask “oga, why are we doing it this way, why don’t we do it this way, I don’t agree we should do it the way you have decided”. When he finishes explaining you will now see that he has considered all angles, and he doesn’t buckle under pressure, and that one is very uncommon in leaders. He considers all the angles. For instance: when the battle against Covid-19 started, Osun is one of the earlier states that locked down the state; and he was the first governor to say the President should consider locking the entire country down because he looked at all the angles. He would hold meetings. He can hold meetings for 6 hours and go into another 7 hrs, and another 7 hours and still looking like he hasn’t done anything. Even those of us who are younger than him have had to say “Oga, Your Excellency I need to go now” and he would say “you can go” and he can go on and on like that. Then, the way he manages the finances of the state. I remember when coming into the state everybody was telling me how broke Osun was. But when I got here I found out that the man just knows how to juggle balls without anyone failing. He is doing a balancing act that is almost magical. I asked him after about 6 months of working with him where he is getting the money to do everything. He is paying salaries, I thought paying salary is all that he would be able to do, considering the allocation that he gets, and then he is able to do a lot of other things. I asked him and he said you will eventually find out.

You are somebody who has had series of experiences from the roles you have played in the past starting from being a reporter, editor and managing a media outfit. Also being the President of the Guild and a Commissioner now. What do you think is the way out in terms of governance in Nigeria?

The governor has done a citizen’s needs assessment with DFIDUK, and they went from community to community, constituency to constituency and they found out that if the city to city assessment is what is needed in Osogbo as a town it is different from what is needed in Aiyedaade or what is needed in Boripe. So, it’s a lot easier to figure your people out, for them to understand where you are coming from when you are doing what they want. So I think governance should be easier if you know what your people want and you just stay focused on that. Don’t draw a 14 point agenda when people’s needs can be taken care of before point agenda.

What is His Excellency doing about women in Osun, in terms of helping to advance the progress of women folk since he came in?

As I said, he is a listening governor and he knows the power of women. He knows women are the real nation builders, so the policy here is to get women on board. They control votes. They control a lot of things. Yes we want more people in political office but there are women already there, doing things not just because they are women but because they are bright, they are intelligent, they are crowd pullers.

People in Osun have political consciousness. Everywhere, any block you go politically you can see women there. The governor involves them. Of course, we are Oliver Twist, we would ask him for more. He was putting together a team recently and I said Your Excellency I can’t see any female name and he asked me to come up with women’s names and we found a space and accommodated them.

Why The Emir Of DAURA Honoured ROTIMI...