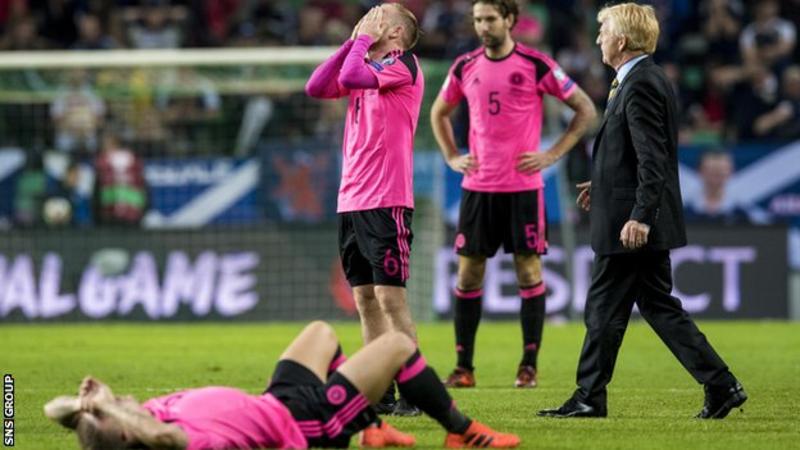 Scotland’s hopes of playing in a first World Cup since 1998 were ended by an agonising draw in Slovenia.

Needing a win to move into the playoffs for the 2018 tournament in Russia, Scotland went in front when Leigh Griffiths cracked in an angled shot.

But substitute Roman Bezjak punished some poor defending with two goals after the break before Robert Snodgrass hooked in an equaliser late on.

The Slovaks beat Malta 3-0 in their final qualifying game, to claim the second spot but they must wait for other results to discover whether they will make the playoffs.

Scotland’s exit guaranteed Northern Ireland’s place in the playoffs, as one of the eight best second-placed teams from the nine groups in the European qualifying, before their final qualifier in Norway on Sunday evening, which they lost 1-0.

Ultimately though, this was a heart-breaking end to a campaign that had taken on such a positive complexion in the five-game unbeaten run that took the Scots to within a victory of a playoff spot for the first time since 2003.

Snodgrass’ well-taken goal gave Scotland hope of yet another last-gasp victory but Gordon Strachan’s side could not find a winner despite Slovenia losing captain Bostjan Cesar to a stoppage-time red card.