Soji Akanbi Celebrates As Baby of The Family Calls To Bar 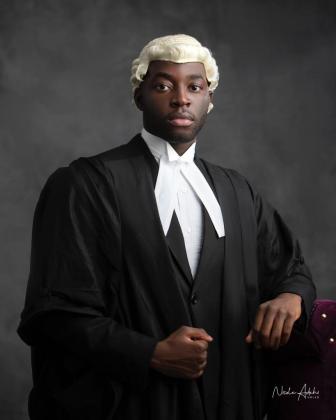 Popular Ibadan celebrity couple Senator Soji Akanbi and his beautiful wife Alhaja Zhikrah Folake Akanbi are in elated mood. The baby of the family, AbdulMaleek was recently called to the Nigerian Bar.

It was celebration galore as the 21-year-old Maleek was hosted in a colourful dinner party Thursday 29 July, 2021, at Cilantro, Abuja.

In his speech, AbdulMaleek, who bagged his LLB from the university of Manchester, UK in 2019, at the age of 19, expressed gratitude to God, his parents and people around him who, in one way or the other, helped to shape his path to success.

Now a Barrister and Solicitor of the of the Supreme Court of the Federal Republic of Nigeria, he noted that his path to success was not a smooth ride and law school almost shook his confidence for excellence, and to further complicate issues, the coronavirus pandemic caused a major set back in finishing up at the law school in 2020. But despite this, he was still able to pull up courage and strength to pass through in flying Colours and here we are today celebrating.

The young Barrister, commended the organizers of this year’s call to bar, for the well organized three days event held at eagle square Abuja, from Tuesday 27th to Thursday 29th July amidst COVID restrictions. Asked about his next step after law school, He’ll like to take a one year break to go through NYSC before proceeding for his Masters degree, says the young Barrister.

The family is blessed with three young men who have proven to toe the path of success in their chosen careers. Mum and Dad, Mrs Folake and Sen Akanbi, were both excited and over joyed having just celebrated the success of the second born of the family, an Economist who got ACA certified barely 9 months ago and works as a Chartered Accountant/Finacial analyst with PWC UK. The first born is a Civil Engineer and CEO of Trifecta Integrated Services Ltd.

Seeing the last born of the three boys progress in his chosen career calls for another round of celebrating God’s faithfulness.

However, the fact that young Akanbis are thriving in their various chosen fields is not surprising; it runs in the family. Their grandfather, late Alhaji Muibdeen Akanbi was a respectable politician and community leader. Who became an elected member of Ibadan District Council and later a honourable member of the Western Region House of Assembly in 1965.

The same feat was repeated years after when Soji Akanbi also became a Federal honourable of House of Representatives in the 3rd Republic, at a very young age. He is as well a former senator who represented Oyo South Senatorial District in the Country’s Upper Chamber.

While the wife is also an achiever on her own, she runs a successful travel & tours company, Libragold.

Soji Akanbi Celebrates As Baby of The Family Calls To Bar was last modified: August 4th, 2021 by Reporter