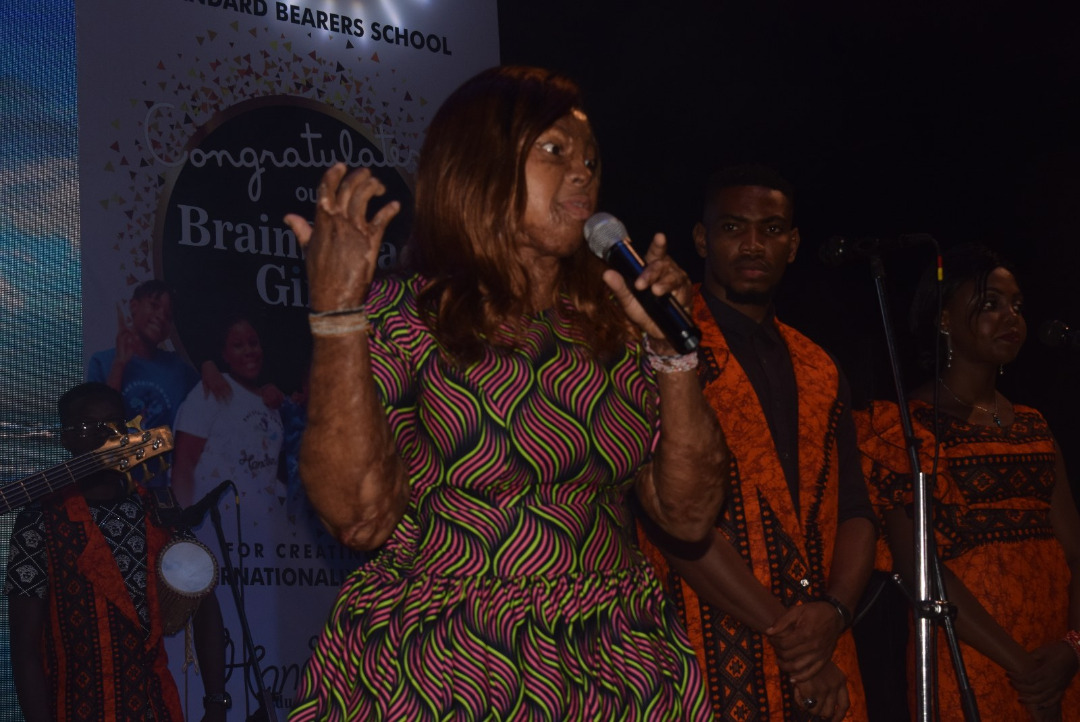 History was made once again at Standard Bearers School, Lekki, Lagos, Nigeria as the school celebrated not just their “Super Women” but also brought out Kechi Okwuchi to perform for the first time in Nigeria.

If by now you still don’t know who Kechi Okwuchi is; she is a 29 year old Nigerian-American singer and motivational speaker born on October 29, 1989. She was one of the two survivors in the Sosoliso Airlines Flight 1145 crash on December 10, 2005 and a finalist at the twelfth season of America’s Got Talent in 2017.

Okwuchi was one of the two survivors in the Sosoliso Airlines Flight 1145 crash on December 10, 2005 that claimed 107 lives, 60 of which were her school mates from Loyola Jesuit College. She received third-degree burns over 65% of her body and was given a 30% chance of survival.

Okwuchi was air-lifted to Milpark Hospital in Johannesburg, South Africa for immediate medical attention and treatment, and later to Shriners Hospitals for Children in Galveston, Texas, United States where she has undergone over a hundred reconstructive surgeries.

In 2015, Okwuchi graduated from the University of Saint Thomas, in Houston, Texas, United States, with a First Class Degree. She was the student speaker at the Commencement Ceremony.

Okwuchi was a speaker at TedxEuston where she gave a talk titled Girls- know thyself. Kechi later went on to take part in the twelfth season of America’s Got Talent in 2017 as a singer, and finished the competition as a finalist. She later participated in America’s Got Talent: The Champions in 2019, where Simon Cowell gave her the golden buzzer, sending her straight to the final, but in the final she didn’t come in the top.

She has performed at sporting events, other events throughout the United States, South Korea and other countries other than Nigeria until Saturday, October 5, 2019. Okwuchi was chosen to headline Utah’s 8th Annual Women of Worth Utah in 2019.

The event was not only centered on Kechi, Standard Bearers School who were proud winners of Technovation 2019 also celebrated a group of five Nigerian girls; the team comprising Ariyo Ayomikun, Ivana Mordi, Jadesola Kassim, Munachiso Chigbo and Pandora Onyedire, all Grade Six students of Standard Bearers School Lagos, were the only African team to make it to the finals.

They had cruised their way to the finals, after coming tops at the State, Regional, and National levels of the competition.

The girls invented an app that helps less privileged children go to school. The app, “Handsout”, won the People’s Choice award at this year’s global Technovation competition, which featured more than 19,000 teenage girls. Brain Squad were looking to follow in the footsteps of last year’s surprise winners, Team Save-a-Soul; another Nigerian side that saw off competition from teams from around the world on their way to claiming the gold in the global competition for young girls.

Handsout allows people all over the world to easily donate to Nigerian children and their families to help them pay for school fees, stationaries, and medication.

Another achievement from the school which was celebrated that blissful evening was that of two young sisters who had grown their passion for baking into becoming entrepreneurs.

This sisters have been celebrated within Nigeria over the years either by been featured in Magazines or hosted on air.

The event kicked off little into the evening as media houses swarmed around the host, guests and celebrities who were present for the usual light, camera, action. A very brief media parley had Mrs Oni and Kechi addressing the press while flanked by two of the Brain Squad Girls (Ivana Mordi and Pandora Onyedire) present.

Mrs Oni described SBS as a family school that offers holistic education to parents seeking a technology driven, 21st century education for their children. She said SBS are lifelong learners who belong to a community where all individuals are valued and supported on their journey to self-discovery.
“At SBS, we are committed to giving our students a solid foundation and an excellent start to life. Hence, we encourage and guide them to become independent, confident and responsible members of the community. Life at SBS begins at our Infant school and continues through to Grade 6.

We utilize a curriculum that excites and stimulates children’s creativity and entrepreneurship and professional staff that work assiduously to provide a happy, supportive and purposeful environment for all our pupils.

I am honored to lead a team of educators that is committed to child empowerment and wholesome development. The style of teaching enables pupil led classrooms enhanced by outdoor learning, extracurricular activities, competitions and other events.” She added.

Kechi also addressed the media as she narrated her ordeal from the 2005 Sosoliso air-crash to the Simon Cowell Golden Buzzer in 2017. She was also excited to be back in Nigeria and she couldn’t hide her joy, she was excited to be performing in Nigeria for the very first time.

On stage was the band dishing out renditions of different songs to the delight of guests who were already seated. The atmosphere was cool and good music made it cooler as can be said to have experienced an evening of coolness and awesomeness.

Some major highlights of the event includes the presence and performance of Nigeria’s number Alternative-Soul musician, multi-instrumentatlist, singer-songwriter and composer, Emmanuel Bez Idakalu popularly known as Bez. The singer who recently dropped his Bible Verse inspired album “The Light” in July perform 3 songs to the delight of guests who sang along and danced to the soulful melodies.

The peak of Bez performance was when he brought his performance to a close with his hit song “Stupid Song”. The track had the whole guests on their feet singing and dancing.

Kechi also took to stage to sing 3 songs and she wowed the guests with her voice and performance. If one thing is to be remembered for the night, it was that Kechi gave an electrifying performance though it was her first ever performance in Nigeria. Kechi’s story on how she rediscovered music and how it became her therapy into healing has been shared all over the world and it has inspired burn-victims globally.

The night was also filled with lots of other celebrities. The Newly Revamped Performing Musicians Employers Association of Nigeria (PMAN) president, Pretty Okafor of the defunct veteran group/duo, Junior and Pretty was also at the event to celebrate with school.

Mike Aremu, a Nigerian Afro Jazz Saxophone player who draws his inspiration from traditional Nigerian Sounds. Mike Aremu has a reputation of the front running world – class saxophone players, currently one of the most successful Jazz global export from West Africa in particular Nigeria and he would be celebrating his 2o years on stage in coming weeks.
Nigerian Singer, Comedian and Actress, Chioma Omeruah popularly called Chigurl also graced the event and she was full of spirit as she mingled with the guests and had a swell time enjoying the night and dancing to the music from the stage. There were also a lot of other prominent guests at the event.
The event was packaged by the Ayoola Shadara Inspiro productions and it was definitely a top class event as the entertainment outfit once again delivered.
The eventful night came to an end with guests and celebrities taking pictures and getting to know each other more.

For 22 years, Standard Bearers School has been building young talents on 5 basic principles ranging from Entrepreneurship to Technology. The school is located on a 4,500 square meters of prime property at the heart of Lekki Phase 1, off Admiralty way, Lagos.

HOW I HELP OTHER LADIES HAVE A FLAWLESS SKIN SKIN THERAPIST, BRIDGETT MISAA