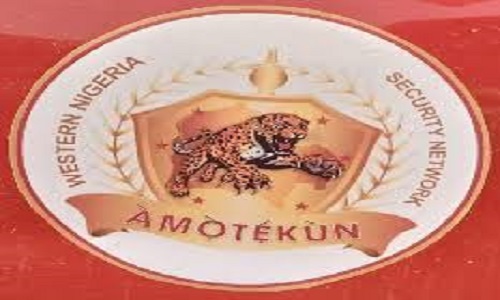 A suspected operative of Oyo State Amotekun Corps has been fingered in the death of 21- year-old Oluwatosin Thomas.

The incident occurred at Inalende area of Ibadan, the Oyo state capital city on Wednesday night.

But, Amotekun Commandant Col. Olayinka Olayanju (rtd.), when contacted, said he has started investigating as soon as he got wind of the development.

He said he had invited leaders of the Corps in the area for proper briefing and would ascertain the claims.

He promised to get back as soon as he finds out the true situation of what transpired.

He however assured any member of the Corps found guilty would be made to face the full wrath of the law.

Speaking on the incident, which threw residents of Inalende into mourning, sources said the deceased had left his house to buy bread in Mokola, when operative of the corps stormed the community, shooting sporadically.

Thomas was said to have been hit by stray bullet.

He was said to have been seen on the ground in the pool of his blood after the shooting stopped.

It could not be ascertained what prompted the shooting or if the operatives were invited for security measures as at the time of filling this report.

The mother of the victim, Mrs. Thomas, when contacted said she ran to the spot as soon as she received the news, challenging the officers on why her son was shot.

She also alleged the operatives assaulted and threatened to kill her alongside a brother of the deceased.

She added in her struggle to ensure she gets hold of one of the operatives who allegedly shot his son, she tore the uniform of one of the officers before the vehicle with number 012 drove off, leaving the boy in the pool of his blood.

Another source, who resides in the area, who simply identified himself as Mr Laide, said said Oluwatosin was rejected at the University College Hospital where he was rushed to.

He said the boy died along the way as doctors told them he had lost so much blood.

The findings of the State Commandant of the Corps were being awaited as at the time of filling this report.

Efforts to get a confirmation from the Police proved unsuccessful.