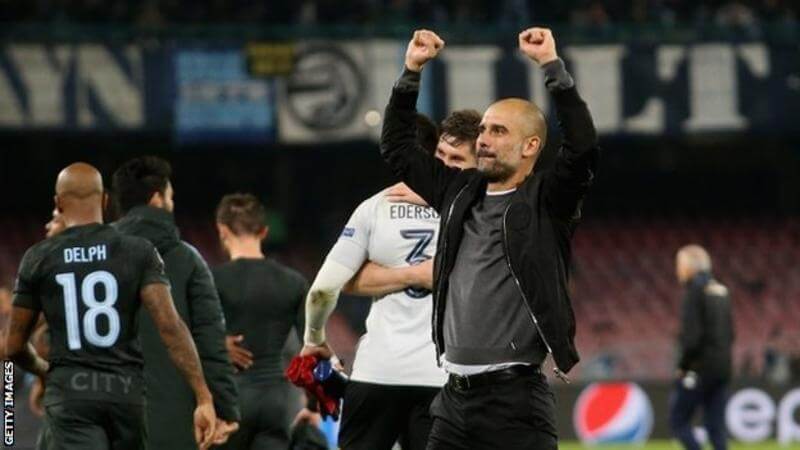 “I’m really happy we’re in the last 16. It was a great victory,” said Guardiola.

“The level of football for a spectator was just amazing, all I could say was ‘wow’.”

Napoli, who are unbeaten at the top of Serie A, led through Lorenzo Insigne’s goal and – after Faouzi Ghoulam went off injured – Nicolas Otamendi and John Stones scored headers for City.

Jorginho levelled from a penalty but Aguero scored his record goal from the edge of the box and Raheem Sterling added an injury-time fourth.

“They completely destroyed us in the first 20 minutes, especially Faouzi Ghoulam and I wish him well,” said Guardiola.

“We suffered a lot but our players showed personality.”

The Catalan said: “When one guy achieved that – big congratulations. What he’s done for all his team-mates – he’s a legend in the history of this club. Enjoy it. Everyone has to be so proud.”

“I thought we were really brave tonight and we tried everything,” he said. “We had to try to win and I prefer that, even if we had to take risks.

“I don’t think we were too far away but we must not forget we played one of the best teams in Europe.

“I am very happy with the way we played technically, tactically and physically.”