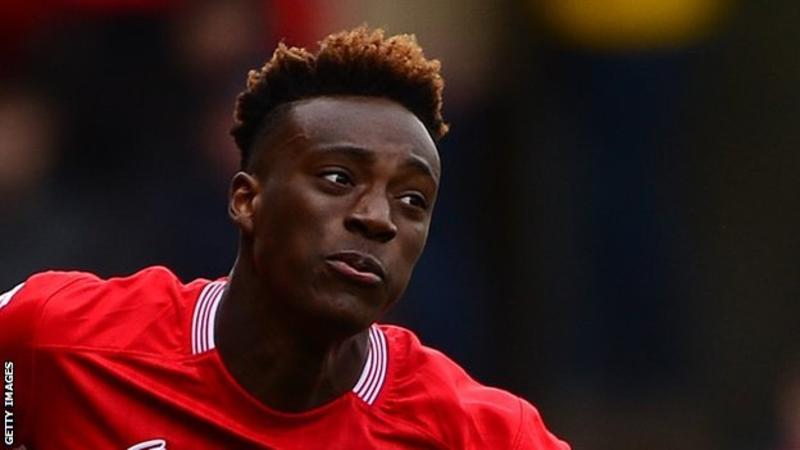 Swansea City chairman, Huw Jenkins has said that his club have raised a stiff competition against Newcastle and Brighton for the loan signing of Chelsea striker Tammy Abraham.
Tammy,19,  England Under-21 international scored 23 goals for Bristol City in the Championship last season.
“He’s a young and up and coming player we are interested in,” said Jenkins.
The Swans chairman also said the club will fight to keep Gylfi Sigurdsson, Alfie Mawson and Fernando Llorente, who have all been linked with moves.
Swansea are hoping that Abraham having worked with manager Paul Clement before during his time as a coach at Stamford Bridge, can work in their favour.
Jenkins told BBC Wales Sport: “Tammy does not have Premier League experience, but we are interested.
“Paul knows him from Chelsea. If you look at the options which have been publicised, (they are) Brighton, Newcastle and ourselves, so it is left to Tammy and his family to decide where he wants to go next.”
Jenkins says Swansea are determined to keep hold of their star players, despite Everton being linked with a £40m move for Sigurdsson and England Under-21 defender Mawson apparently attracting Tottenham Hotspur.
Spanish striker Llorente has also been mooted for a move.
“Keeping your top players is always a difficult one,” Jenkins said.
“It is a slow market as the players have been away on international duty. We want to keep our best players and to that end Gylfi Sigurdsson and Fernando Llorente had good seasons with us last year.
“Naturally that causes interest and there is plenty of media coverage, but our aim is to keep our best players and try to add to that.
“We aren’t putting figures on our players. We see the figures bandied around in the Premier League and they are crazy, but we are part of that.
“We will do our best to add to the team, not take away from it.
“We’ve had no direct contact from any club, it is pure speculation and we hope it remains so.”

Swansea Will Do Everything Possible To Sign Tammy Abraham – Huw Jenkins was last modified: June 19th, 2017 by Damilare Salami