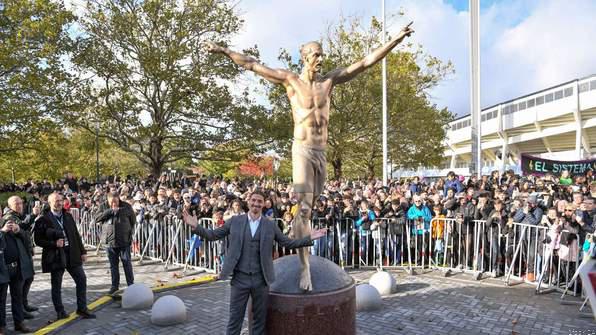 Zlatan Ibrahimovic helped to unveil his own shirtless statue in Malmo on Tuesday.

The LA Galaxy star has been immortalised in a striking bronze monument near Malmo’s stadium, where he began his professional career in 1999.

The 38-year-old posted a picture on Twitter showing him alongside the work and surrounded by crowds of fans, with the caption: “We are Zweden!!!

The bronze Zlatan, standing on a plinth and said to measure nearly nine feet in height and close to half a ton in weight, was commissioned by Sweden’s football authorities to honour their record goalscorer.

It depicts Ibrahimovic celebrating in recognisable style, with arms outstretched and shirt off – although his famous tattoos appear not to have been carved on the glistening torso.