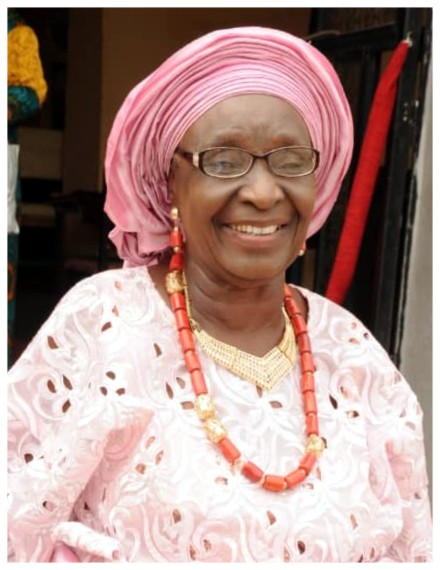 •Details Of The Exclusive Birthday Party In ADO-EKITI

Saturday 8th May 2021, Ekiti and Ondo social establishments witnessed a grand party. It was Spotlight Africa Magazine Publisher, Taiwo Adebiyi’s mum’s 85th birthday. Where Madam Rachael Aladekomo Adelusi (JP), amidst funfare, was well celebrated. Taiwo, alongside her siblings, didn’t spare no cost in making the event a glamorous one. AB Civic Centre (Afe Babalola Hall), University Road, Ado-Ekiti, reception venue was filled to the brim. In fact, there were additional canopies erected outside the hall to accommodate more guests.

Top celebrites from Ado, Akure, Lagos, Abuja, Port Harcourt and abroad were at the party. Best of the best of party vendors from Lagos and Ado-Ekiti were engaged, the venue was transformed into a small paradise with the superlative decorations. Official colours for the party were Baby Pink and Burgundy. The Lagos-based popular event planner, Makabis and Bennet packaged the whole events. While the Bonsue Fuji creator, Adewale Ayuba was on bandstand.

The whole arrangements were just on point. The food, drinks, music coupled with the quality of personalities that attended the party, no doubt, made it a classic one. All kinds of choice drinks including champagne, Hennessy, red wine and co flowed like water. It was a party to remember, as big boys partied hard.

We almost forgot to tell you about the beautifully decorated 3-step birthday cake, which comes in White, Gold and a little touch of Pink.

City People’s Correspondent, DARE ADENIRAN was at the star-studded party and brings to you some of the behind the scene gists. You can’t afford to miss the exclusive details of what went down at the party. Enjoy it.

Meeting the celebrant, Madam Rachael Aladekomo Adelusi for the first, one won’t but be amazed at her looks and agility at 85. She doesn’t look her age at all. She is been described as a peaceful, loving woman, who always derives joy in the happiness of others. She has been a source of inspiration and role model to many.

Mama Adelusi was born on March 23rd, 1936, in Ereguru, Ado-Ekiti, Ekiti State. She was born into the family of Late Pa Ogunmilua and Late Mrs. Memunat Omolola. Her parents are both from Ado-Ekiti. Despite the fact that she had no former education, she excelled in her choice of business, Garri (cassava flakes). She is well known in the trade, having learnt the rudiment of the business from a late prominent Garri merchant, Mrs. Ibitoyo. Whom she was living with due to her parents’ financial inability.

Today, Madam Rachael’s tenacity and steadfastness have paid off. She has raised successful children and she is impacting her immediate environment positively, even at her age. She is a devote Christian, a member of Egbe Ilosiwaju in the Cathedral Church of Emmanuel, Okesha. She is also a grassroots politician. She is a prominent member of the Peoples Democratic Party, PDP in Ado-Ekiti.

The prayer of any mother is for her children to flourish and prosper in her lifetime. That God has granted unto Madam Rachael Aladekomo Adelusi, all her children are successful before her eyes. She has even seen her grandchildren and great grandchildren. Her children are Mrs. Idowu Adewumi, Mr. Gani Opokiti, Kehinde Opokiti, Taiwo Ehinafe, Kehinde Adelusi, Taiwo Adebiyi, the Publisher of Spotlight Africa Magazine and Idowu Onah.

The fact that Mama is well loved among her family and in the Church of God played out during the Church service in her honour at 85. The service, held at the Cathedral Church of Emmanuel, Ekiti Diocese Church of Nigeria, Anglican Communion, Ado-Ekiti, was a well attended one. The Church leaders, as well as members were all on ground to honour Mama. The service was coordinated by Very Reverend Francis O. Bankole. Other men of God who played one role or the other include Rev. A.O, Rev. Deji Jesumileye, Kumapayi, Rev. R.A Famewo, Dr. Segun Agbetuyi, Rev. E.O Adeniyi, Mr. Dipo Ologunde, Mr. Gbenga Ogunlola and Hon. Toyin Omotoso.

After Church service, the invited guests, family and friends were hosted into an elaborate reception at AB Civic Centre, University Road, Ado-Ekiti. To say the reception was a glamorous one would be an understatement. It was grand and exclusive party that will be remembered for a long time in Ado-Ekiti. Top celebrities from Ado, Akure, Lagos, Abuja, Port Harcourt and beyond the shores of Nigeria were present. The decoration was superb. The lovely ushers in Black gown did an excellent job. Immediately after the opening prayer by Pastor Wale Ojo, the party officially took off with good music by Bonsue Fuji King, Dr. Adewale Ayuba. Different dishes, both local and continental, were supplied in essence. Choice drinks were available.

BETWEEN KING JAFIL & HIS FRIENDS

One man whose name kept resonating at the party was Babatope Abayomi Adebiyi, a Dubai-based businessman and Chairman of St. Jacobs Hotel in Akure. He is the celebrant’s son-in-law. He is Taiwo Adebiyi’s husband. King Jafil, as he is popularly called, is a top socialite in Lagos. He is an affluent hotelier, well connected, yet simple and cultured and doesn’t make noise about his achievements. He is also a well known philanthropist. At the party, many of his friends were on ground. Their presence, no doubt, added colour and glamour to the party. Some of them are Segun Oladehinde, Hon. Akinlayo, Tolu Kolawole, Femi Owolabi, Kayode Ogunremi, Femi Fadoju, Olumide Anawoye, Tobi Omosebi, Tolu Fulani, Busayo Lawal, Niyi Falade and a whole lot of others.

WITH LOVE FROM ABROAD

People came from far and near for the party, particularly from abroad. Family and friends came from as far as USA, UAE, UK and Istanbul. Some of whom are Mr. Olumide Adakeja who flew in from Boston, George Akande from UAE, KC from Instabul, IK Adeyanju from Maryland.

TOP SOCIETY WOMEN IN THE HOUSE

As we had many top male socialites, so also were some top society women at the party. They all made good fashion statements with their different styles. The list includes the ever beautiful and stylish Regent Omotunde Adelabu, Erelu Folu Iginiga, Princess Kemisola, Yetunde Cofie, Hon. Tosin Aluko, Erelu Tolabo Ajibade, Princess Adelanke, Chief (Mrs) Arije, and others.

ABOUT CHAIRMAN OF THE DAY, CHIEF ADE AJAYI

Chief Ajayi of Little by Little Photography was the Chairman of the occasion. He was a perfect choice for the task. Apart from being a prominent Chief in Iworoko-Ekiti, he is also an in-law to the celebrant, Madam Rachael Aladekomo Adelusi. Chief Ajayi came to the party with his beautiful wife, Mrs Hadizat Ajayi. He is the National President of Nigeria Professional Photographers/Videographers Association (NPPVA).

Top professional caterers, as well as event planner were engaged for the party. While Kafayat of Makabis and Bennet planned the whole events, while Toniah Events Global handled chilling of drinks, the bar and small chops. FAMFAB Catering Services and others also did their best. Bonsue Fuji maestro, Dr. Adewale Ayuba was on bandstand. The duo of Sola Oladele(Pa Aristo) Niyi Adeyemi aka Alawada and Afolabi Olorunfemi (Asorogbayi) were the MCs at the party.

Mama Rachael Aladekomo Adelusi’s 85th birthday ceremony was a well attended one. It was a celebrites-studded party. Some of the dignitaries who came to share in the joy of the family include

How The OTEDOLA In-laws Dazzled At Lady...