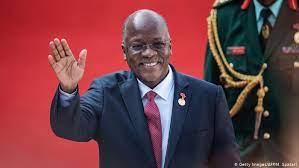 The death of Tanzanian President John Magufuli has been announced after weeks of hesitation over his health and whereabouts.

The country’s Vice President Samia Suluhu Hassan made the announcement in a televised broadcast to the nation late on Wednesday. She revealed that the 61-year-old president had died of a “heart condition”, which he had suffered for 10 years.

Magufuli had first been briefly admitted to the Jakaya Kikwete Cardiac Institute on March 6, but was subsequently discharged, Hassan said on state television. But he was rushed to hospital again on March 14 after feeling unwell.

According to Tanzania’s Constitution, Hassan, 61, should assume the presidency for the remainder of the five-year term that Magufuli began serving last year after winning a second term.

WHY NOBODY WANTS TO PLAY AGAINST US- CHELSEA MANAGER, TUCHEL