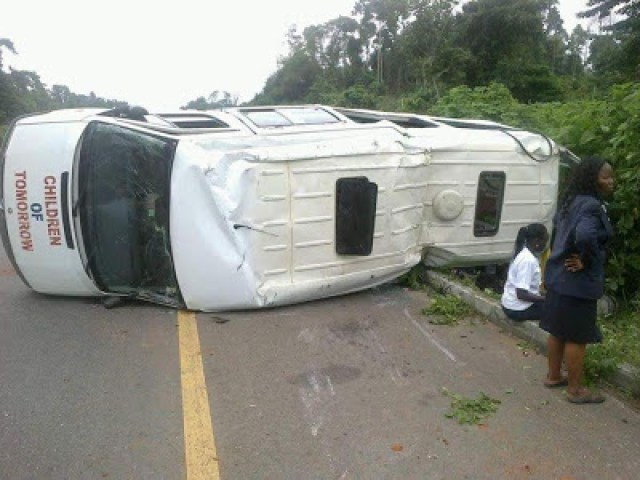 An auto crash involving teachers and pupils from Bayelsa State has claimed one life and injured several people on the Enugu-Onitsha Expressway.
The Enugu State Commissioner for Health, Dr. Sam Ngwu, confirmed the development, yesterday.
Ngwu said the accident occurred at Ugwu Onyeama, near Enugu at about 8.45p.m. on Wednesday.
He said the incident involved 40 people, including pupils whose ages ranged from seven to 15 years, who were on an excursion to the Ngwo Forestry in the Udi Local Government Area.
According to Ngwu, “the victims were on excursion to Enugu State. Their bus fell into a gully and many of them sustained multiple fractures, lacerations, cuts and swellings on their faces.

“Some of the victims were immediately taken to nearby hospitals in Ngwo, following the intervention of the state government.
“One of the teachers died, which is a miracle, considering the severity of the accident.”
Ngwu said that the state government, on getting the information from the state’s emergency management agency, deployed four ambulances to the scene.
His words: “Eleven persons were severely injured.
10 of them were later transferred to the National Orthopaedic Hospital, while others were moved to the University of Nigeria Teaching Hospital.”
Ngwu said that the Bayelsa Commissioner for Health had been notified of the incident and was on his way to Enugu to see the victims.
The spokesman of Enugu State Police Command, Mr. Ebere Amaraizu, was not available to comment on the incident.
He neither picked his calls nor responded to text messages.