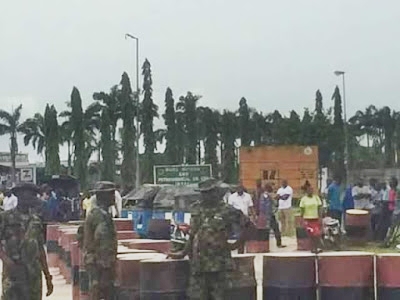 There has been palpable tension and anger in Warri and its environs for the past few days after a Naval personnel attached to NPDC shot and killed two community youths following argument over job slots in the company.

Palpable tension and anger has been reported in Ifiekporo community in Warri South Local Government Area of Delta State, the host community of the Warri Refinery and Petrochemical Company (WRPC) and Nigerian Petroleum Development Company (NPDC) where a naval personnel, last Friday, allegedly killed two youths over an argument on job slots.

The deceased youths, one of them simply identified as Agbolu was from Ifie community where the company is sited in Warri South while the other whose names could not be ascertained was from Ekpan in Uwvie Local Government Area.

The incident which happened at about 2:30 p.m. last Friday has set both communities in tension. It was reliably gathered that youths from both communities were engaged in job slot negotiations with the management of NPDC when argument arose that was amicably resolved but shockingly the navy officer was said to have moved in and shot first into the air before shooting point-blank at the two boys who died immediately. According to ThisDay newpaper, some youths in the community are said to be gearing up for a showdown with naval personnel deployed in the area over the “unjustifiable” killings of the harmless youths.
Security sources said the community was particularly irked at attempt by the Nigerian Navy to twist the event leading to the shootings by claiming that the deceased youths attempted to snatch a rifle from the naval rating.
“The youths of Ifiekporo and their elders are angry with the navy when they heard that their officers were claiming that the youths were shot when they attempted to snatch the rating’s AK 47 rifle. This incident occurred in the presence of other sister security agencies, as well as workers of the oil company,” the source maintained. Speaking on the matter at the police A division headquarters, Chairman of Warri South Local Government Area, Hon. Mofe Edema, expressed sadness over the shooting saying: “This is one killings too many. How can NNPC security personnel be killing these innocent community youths like flies every time. It is just not fair!”
Reacting to the last Friday’s incident, the Commander Nigerian Naval Ship, NNS Delta, Commodore Ibrahim Dewu, in a statement issued yesterday said the naval command has commenced thorough investigation into the incident.
According to him, “In respect to the incident that happened at the Warri Refinery, I wish to emphasise our readiness to protect lives and property in our AOR. In doing this, we will be cognizant of the need to relate cordially with our host communities. I assure you that investigation is still ongoing on the issue,” he stated.
Tension in Warri as Naval Officer Shoots Death Two Youths After Argument Over Job Slots [Photos] was last modified: May 16th, 2017 by Arinze Ago