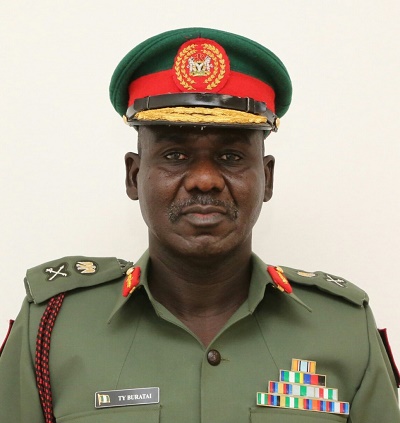 The Chief of Army Staff, Lt. General Tukur Buratai, has revealed that Boko Haram terrorists can be found everywhere in Nigeria including Lagos State.

Buratai disclosed that the terrorist group is not restricted to the North-east alone but are currently scattered all over Nigeria.

Featuring on Arise Television, the Army Chief said since members of Boko Haram have been subdued in the North-east, they have moved to other parts of the country.

He stated that though the military has defeated Boko Haram, its currently facing the challenge of terrorism.

According to Buratai, terrorism would remain in Nigeria for years.

He said: “We have defeated insurgency, but facing the challenge of terrorism.

“We must differentiate between insurgency and terrorism. I have tried to tell them at the National Assembly. Someone said three local governments are under Boko Haram. How?

“These guys are not controlling any territory. They attempted to establish their territory, caliphate in Gwoza but they have not been able to because they were flushed out. That is insurgency. They are not holding any territory.

“Typically, that is the end if insurgency. But what of terrorism? Terrorism will outlive you and me and probably everybody in this house because terrorism, since it started, just like armed robbery, like kidnapping, burglary, cultism, it would continue.

“These are all smaller parts of terrorism. It is when it goes higher that you have arsons, like it happened in Borno yesterday, murder and so on deliberately, no cause.”

Terrorism Will Remain In Nigeria For Many Years – COAS Buratai was last modified: February 13th, 2020 by Damilare Salami