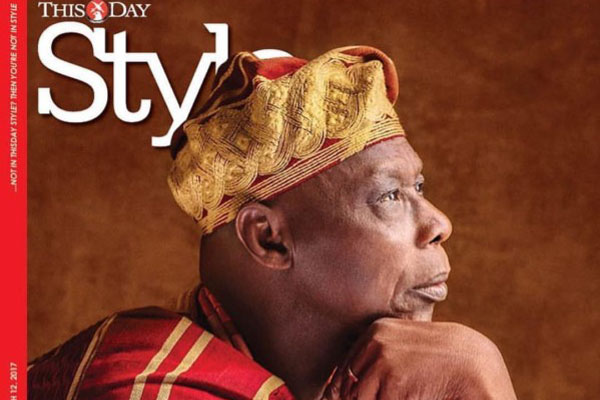 Ever since General Olusegun Obasanjo (80) wrote his 178 page book MY COMMAND published by the Heinemann Education books on June 28 1981, a book reviewed by Anthony Clayton, a lot of Nigerian Generals have become authors.And a lot has been written too on the Generals.

The latest is A NOBLE PATH on Brigadier-General Babatunde Jonathan Ogbeha(70), the pioneer Governor of  Akwa Ibom state,written by Mr. Innocent Nzeke Wamiko. In the 376page book, published by Parresia Publishers Limited, we were told of how Colonel Tunde Ogbeha, who took over from Colonel John Mark Inienger(1945-2002) as the Governor of Edo state in 1989, released Major General Muhammadu Buhari from prison so as to bury his mother, Zulaihat Buhari in Daura.

Mr. Wamiko wrote” Ogbeha’s predecessor, Colonel John Inienger handed over a sensitive issue to him. The former Head of State, General Muhammadu Buhari, had been detained and was under house arrest in a government guest house at Benin. The state government under Ogheha, was responsible for his welfare and ably provided adequate care to Buhari. In December 1989, an army intelligence officer came to inform Ogbeha that Babangida had ordered the release of Buhari. This was after the death of Buhari’s mother. Having not gotten prior information from Babangida, he flatly refused the order. Subsequently, Ogbeha went to seek clarifications from Babangida who gave a go-ahead. He then went to inform Buhari, who initially refused to leave by himself. Ogbeha at about 8p.m. personally drove Buhari to the airport when he had asked the intelligence officer that initially brought the news to wait for them. Buhari was subsequently flown to Kano en-route Daura”.

In the book we are informed of the details of the fifty year old friendship of Brigadier Ogbeha and his bosom friend, Brigadier General David Mark and how they were retired following the outcome of the June 12 1993 Presidential election, and how they both escaped to exile and did not return until after the death of General Sanni Abacha in 1998.

Then there is IBRAHIM BABANGIDA, just written by Dan Ochima Agbese(73). Mr Agbese who is a powerful writer and Editor of the defunct NEW NIGERIA in 1978 won the British Council Playright prize in 1969 and John Taylor award, Columbia University prize in 1977.

Then there is the controversial REMENISCENCES by the former Chief of Army Staff, Major General David Ejoor, published in 1989 by Malhouse Press Limited. The book was so revealing that I have read it more than four times. Then came, A COMBATANT IN GOVERNMENT, by Major General David Medayese Jembewon also published by Heinemann in 1978 and DANJUMA-THE MAKING OF A GENERAL  by my friend, Lindsay Bariet, published by the Fourth Dimension in 1989. Several passages of that book had been quoted and misquoted by interest groups.

Of special interests is IRON SIDE: THE BIOGRAPHY OF GENERAL AGUIYI IRONSI by my friend and colleague, Chuks Ileogbunam, published by Press Alliance Network Limited London in 1999. Chuks and I worked together years ago. Like Mohammed Haruna now National Commissioner at INEC, Chuks is a brilliant communicator. NIGERIAN CIVIL WAR by General H.R. Momoh published by Sam Bookman Publishers, which was published by Nigerian Army Education Corps and school in 2000, is also a good read. The spy master, General Aliyu Mohammed Gusau(74) of Course 1 of the Nigerian Defence Academy of 1967, is busy writing his own book. I am sure the book will be revealing. He once served as the National Security adviser under President Obasanjo. He has also served in many capacities in this country. He has paid his dues.

Also writing his book is my friend, Colonel Lawan Gwadabe(68), whose father was of a Moslem Yoruba origin but was brought up in Jos and now married to an Ilorin beauty, Senator Khairat, daughter of the famous Ilorin politician, Alhaji Abdul Ganiyu Folorunsho Abdulrazak, former Minister of Railway in 1965.

Major General Joseph Nanven Garba wrote a book titled DIPLOMATIC SOLDIERING. He wrote REVOLUTION IN NIGERIA-ANOTHER VIEW. His third book, THE ROLE OF THE MILITARY IN AFRICAN DEVELOPMENT was not published before he died on June 1 2002 at the National Hospital in Abuja. SHEHU MUSA YAR’ADUA -A LIFE SERVICE by Jacquieline W. Faris and Mohammed Bormoi is still in circulation.

General Ishaya Bamaiyi, former Chief of Staff has also written a book, VINDICATION OF A GENERAL. The former Military Governor of Western State now comprising of Ogun,Oyo,Osun,Ondo and Ekiti states, Brigadier General Christopher Oluwole Rotimi(82), who still drives his small Toyota Corolla car  himself, is busy writing his own book. I was with him in Ibadan last week and he disclosed that his book will include narratives on General Murtala Muhammed, General Olusegun Obasanjo and his course mate, Major Emmanuel Ifiajuna.

THE TRAGEDY OF VICTORY, a book on the spot account of the Nigeria-Biafra war in the Atlantic theatre by Brigadier- General Godwin Alabi- Isama is of special interest to me. The book which has a lot of historical images was a direct attack on General Obasanjo’s, MY COMMAND. In the book, he commended his colleagues who fought the war including Lt-Col Adebiyi,Lt-Col Ayo Ariyo, Major Makanjuola,Colonel Godwin Ally, Colonel Ipoola Alani Akinriade,Lt-Colonel Abubakar,General Hassan Katsina,Colonel Benjamin, Adekunle, Captain Ladejobi,Colonel Tuoyo,Major George Innih, Major S.S. Tomoye, Colonel Bisala, Major Utuk and others.

General Alani Julius Ipoola Akinriade is a man I so much admire not only as a Civil war hero but as a man with strong Nationalist views. His book MY DIALOGUE WITH NIGERIA edited by his brother, Soji Akinrianade was launched on May 3 this year. I was present at the event. The attendance at the launching was a manifestation of the popularity of General Akinrinade. We are expecting his second book which I’m told will deal with his civil war efforts.

There is also THE BABANGIDA YEARS by Gabriel Umoden whose foreword was by General Yakubu Gowon. It was published by Gabumo Publishing Company Limited. Another book is being written on General Babangida. The title of which is HOW TO BUILD A NATION. But sadly both Generals Babangida, Gowon, Abdusalam Abubakar have not written their memoirs. We are expecting General Gowon to write on the Civil War and expecting General Babangida to write and apologise on the June 12 1993 Presidential election cancellation so that he could rest the ghost of June 12. We are a forgiving nation. General Murtala Ramat Muhammed(1938-1975),General Johnson Thomas Umanakwe Aguiyi Ironsi(1924-1966) and General Sanni Abacha(1943-1998) died in office, so they could not have written their memoirs. We expect General Muhammadu Buhari to write a book when he leaves office someday.

In the words of Brigadier-General Tunde Ogbeha,”homeboy” from Lokoja in Kogi state,”ours is a service, it is by accident that we find ourselves in power”. .

The Generals & Their Books was last modified: October 17th, 2017 by Eric Teniola