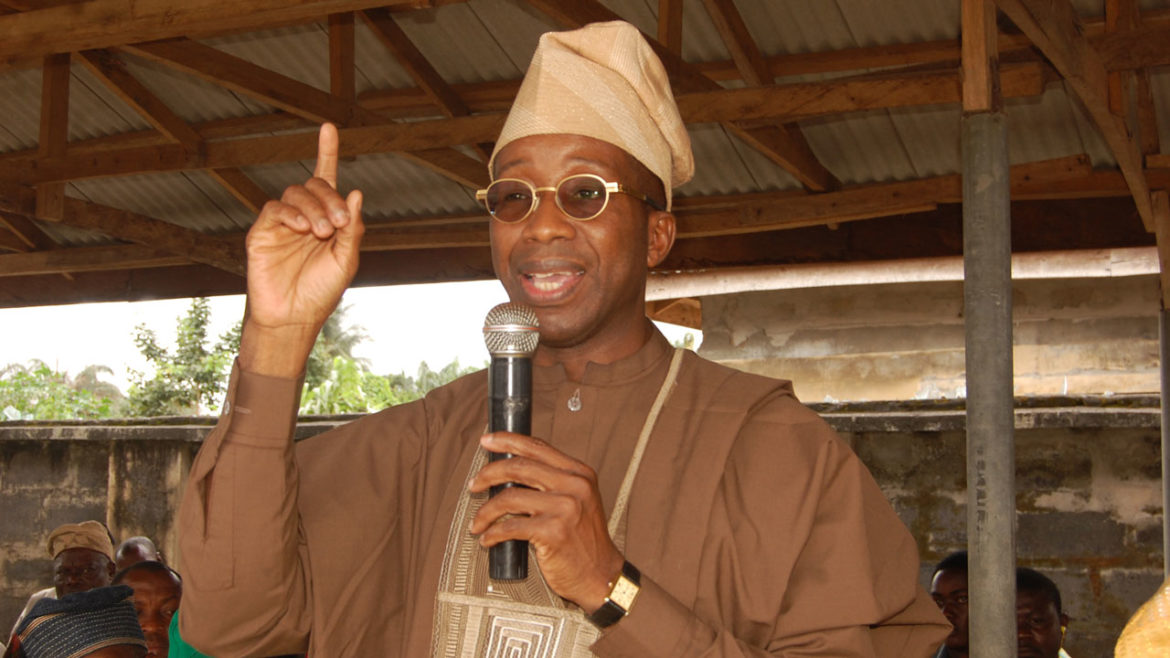 Jimi Lawal, one of the governorship aspirant in Ogun APC is still very angry at how he and many other aspirants were edged out of the OGUN APC governorship primaries.

And he has already petitioned Comrade Adams Oshiomole, the National Chairman of the APC, his party calling the recent Guber election in Ogun a facade.

As His Excellency is no doubt aware, a Committee of 8 members was constituted to conduct the above primary election, which membership was subsequently increased to 10; but later reduced to 8 on account of alleged sharp practices by two of the members.

(2) After a protracted delay in Lagos and Abuja for the printing of ballot papers and other sensitive materials, members of the Committee eventually arrived in Abeokuta just before 7 pm on Monday 1st October 2018. We immediately received a notice to attend a meeting with the Committee at 10 pm on the same evening in MITROS Garden, Abeokuta. All 6 screened aspirants attended the meeting, but we were surprised to notice that members of the Party’s State Executive Council and a Deputy Governorship “Candidate” were also in attendance.

(3) No sooner than the meeting started at about 10.35pm, after introduction and setting of the agenda, a fracas occurred which we later understood to be a street fight between two gangs: one accompanied Prince Dapo Abiodun and the other being that of Hon. Adekunle Akinlade which led to the arrest of a couple of those of Prince Dapo Abiodun. He therefore vehemently protested against the selective arrest, and we all appealed to the Secretary to the State Government (who was not only in attendance but also served as a moderator), that since the atmosphere of the meeting was that of a family affair as he had previously stated in his opening remarks, the arrested people should be released while both sides were enjoined to keep the peace. The SSG upon consultation with the Chief Security Officer (COS) to the Governor assured us that the arrested parties would be released. Thus, the meeting continued.

Shortly after the Secretary to the Committee – Sen. Gbenga Aluko informed us about the guidelines and processes for the conduct of the direct primary election through secret ballot. We then sought clarification on the modus operandi, only for the meeting to be disrupted again with the sound of gunshots which we later understood to be a resumption of the fight between the two gangs. The commotion that ensued thereafter led to the abandonment of the meeting.

(4) We were later invited to reconvene in the Green Legacy Hotel but this time strictly for the aspirants, as it should have been from the onset. Two of us showed up i.e. Senator Gbenga Kaka and Jimi Lawal but we had to leave a little after 1 am when the others did not show up and a quorum of at least three aspirants could not be formed. We agreed to nonetheless ensure that the primary elections would be conducted the following day, the 2nd of October, 2018. Regrettably, we were later advised that all the aspirants need to reconvene with the Committee to fully agree on the guidelines and modus operandi, which resulted in another meeting being convened for 3 pm on the 2nd of October, 2018.

At the reconvened meeting, three of us showed up (Sen. Gbenga Kaka, Hon. Bimbo Ashiru and Jimi Lawal) and given that a quorum was formed, the modalities were agreed upon to the effect that 6 member Electoral Committees would be constituted at each of the 236 Wards and each aspirant was also required to nominate a Returning Officer per Local Government (who must be literate and numerate) making 20 in all, for the collation at Local Government level and another Returning Office for collation at the State level. The meeting came to an end with the resolution that each aspirant would submit a list of the Ward Agents, Local Government and State Returning Officers (the said list to contain names, Wards, LGAs and phone number of nominees) no later than 8am the following morning to ensure that the primary election is conducted on the 3rd of October, 2018 unfailingly. A member of the Committee – Ms Esheza Oshogwe subsequently forwarded an allocation list of five returning officers for each Local Government (from the list submitted by the aspirants) as per attached, marked Annex I.

In order to assist with logistics, it was also resolved that the Committee would not use vehicles or any other resources from the State Government as a result of which an appeal was made by Sen. Aluko for any of the aspirants who could make a vehicle or two available. I volunteered to make as many vans as were needed available and also assisted in mapping out the routes that would ensure effective and timely delivery of the materials to the 20 Local Government offices of INEC. The vehicles were required to be delivered to the Committee by 8 pm that evening so the delivery could commence as early as 6 am the next day, upon arrival of police and other necessary security escorts.

(5) As agreed, five vans were delivered that evening only for me to learn from one of the drivers at about 10 am the following day that none of them had left Abeokuta. I promptly called Sen. Gbenga Aluko to enquire about the reason for the delay as we had been mobilizing the voters who had started arriving since 7 am that morning. Sen. Aluko expressed frustration on account of Governor Amosun having directed the State Commissioner of Police not to make requisite police officers available for the exercise. He, however, assured me that the Committee Chairman was working with the National Chairman and the Inspector General to secure police officers from another State.

I called Sen. Aluko again at about 1 pm, only to be informed that alternative arrangements had been made and that the vans could not be used because they were marked and that thugs might follow them. I immediately pointed out that the materials should not have been dispatched without an armed police escort, just as the materials should have been accompanied by some of the aspirants’ representatives as agreed the previous night. He assured that it was an oversight and that our returning officers and agents should go to INEC’s offices in the various Local Government Areas to receive the materials and ensure that the elections were held as required. We acted promptly by ensuring that all our Local Government returning officers were present in their respective INEC offices by about 1.30pm.

Given that Abeokuta North and South were only a few minutes away from the location of the materials, I called Sen. Aluko again at 2 pm when none of the INEC offices throughout the State had received any of the materials. He again assured me that some of the materials had been delivered and I asked him to be specific; to which he mentioned Abeokuta North and Ado-Odo/Ota amongst others. I again double-checked with our Returning Officers in those locations and called Sen. Aluko back to make it clear that the materials had not been received. I called him yet again at 3 pm, but he did not respond to my calls; at which point it became clear to me that after 2 hours of departure, which was more than sufficient time for 75-80% of the Local Government Area headquarters to have been reached from Abeokuta, that the materials must have been diverted since none had been received.

Since Sen. Aluko was no longer answering my calls, I sent him a message at 3:03 pm as follows “My Brother Distinguished, I must put it on record after our telephone conversation a short while ago that I did not receive any message from you since yesterday and none of our local government returning officers had seen any of the materials in all the INEC’s offices so far! Please investigate and revert asap. With best wishes always. JAL” to which he responded “Noted. Will do” at 5:11 pm. I then personally visited Ijebu-Ode INEC office being my Local Government and was categorically informed that no such materials had been received.

It is worth mentioning that a critical requirement for the primary election is not only for the materials to arrive safely in the Local Government Areas ahead of distribution to the Wards but for the process to also be monitored by INEC with a view to ensuring it is free, fair and credible. It is submitted that this requirement is indispensable for the outcome of any election of this nature to be upheld as credible. I, therefore, addressed a letter, on the spot to the Executive Officer in INEC’s office; who responded by confirming that the materials were not received and that no election was monitored by INEC in any and all of the 11 Wards in Ijebu-Ode Local Government Area. Copies of my letter and his response are attached marked Annex 2A & 2B respectively.

I then directed that our Returning Officers who were still waiting in their respective INEC offices to do the same. A couple of the responses from Ado-Odo/Ota and Ogun Waterside are attached marked Annex 3A and 3B and respectively.

(6) In closing, all attempts to reach Sen. Aluko on several occasions ever since proved abortive only for me to discover that members of the Committee had departed Abeokuta and returned to Lagos at about 5.0pm and were also promptly flown out of Lagos by private jet the same evening. Furthermore, it came as a rude shock that in the circumstance, the Committee’s Chairman announced the so-called results of the non-existent direct primary election. More so, that none of the Committee Members left Abeokuta to visit any of the Local Government Areas and none of the Returning Officers for all the 20 Local Government Areas attested to any collated results whatsoever. The electoral officers at the ward level also did not participate in any declaration of results. To this effect, all our 20 Local Government Returning Officers have signed a statement, some of which are also attached marked Annex 4A, 4B, 4C …to 4M (13 in total).

The National Working Committee is invited to NOTE that:

III.       None of the Electoral Officers for at least four out of the five aspirants that agreed to participate in direct primary elections attested to any results in any of the Wards as required. The evidence of this is that some if not all the other four aspirants would also be addressing petitions to the National Working Committee.

Accordingly, given the preponderance of evidence herein adduced, the National Working Committee is hereby humbly invited to: