The Remains Of Chief OLU BENSON LULU-BRIGGS For Burial 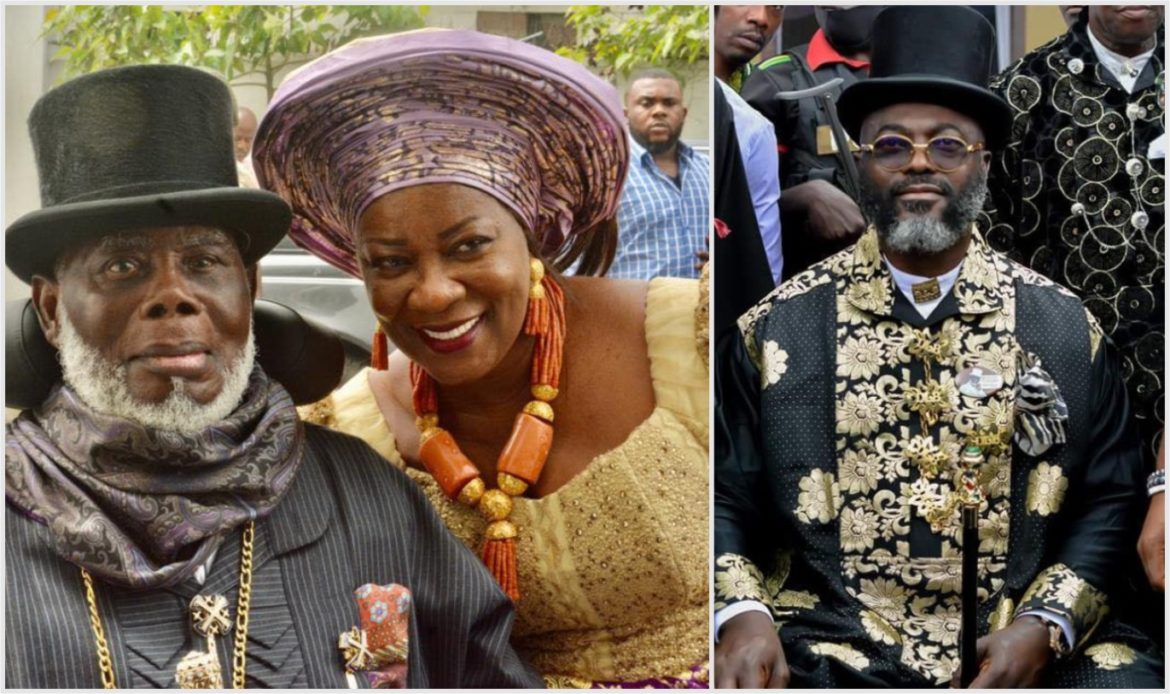 After a hard-won battle over the retrieval of the remains of his late father, High Chief Olu Benson Lulu-Briggs from the custody of his father’s younger wife and step-mother Dr Seinye Lulu Briggs from far-away Ghana, the Chairman of Platform Oil and Gas company Chief Barrister Dumo O.B Lulu-Briggs is set to finally accord the patriarch a befitting Christian burial at his home town in Abonnema come 2021.

Although since the death of High Chief O.B Lulu-Briggs 3-years ago, there has been a litany of litigations surrounding the circumstances concerning his death which the Supreme Court of Ghana had finally arbitrated and adjudicated on it, leading to the successful repatriation of his remains back to Nigeria few months back. And a Port Harcourt High Court sitting at Port Harcourt judicial division in the last few weeks in 2020 rejected an application brought before it by Dumo Lulu-Briggs and his other siblings over the review of the last written Will. In a swift reaction after the ruling, Media aide to Chief Dumo Lulu-Briggs, Mr. Sotonye Ijuye-Dagogo, said “It was the Late High Chief O.B. Lulu-Briggs that was denied justice temporarily as the Chiefs and family members of the late High Chief O.B. Lulu-Briggs are seriously preoccupied with the burial plans of their late Paramount Head, those who are only after the late billionaire’s estate are not resting.

He further said “On Monday, December 14, 2020 the media space was inundated with a screaming headline: “Court dismisses suit by Dumo Lulu-Briggs challenging father’s will” concluding that “by this ruling the last wishes and legacies of the late High Chief Dr. O.B. Lulu-Briggs have been fundamentally protected and stands as admitted to probate”.

The position of the head of the Lulu-Briggs family and the Innikeiroari VI of Kalabari, Chief Dumo O.B. Lulu-Briggs is that, as a mark of respect for their departed patriarch, all media brickbats must be halted during this period, leading to the burial early in the new year.

The media aides and associates of Chief Dumo Lulu-Briggs have therefore remained silent on all the failed legal actions by Seinye Lulu-Briggs to overturn the ruling of the Coroner Court in Ghana which ruled that her husband died in Nigeria before he was airlifted to Ghana. Chief Dumo Lulu-Briggs’ aides have been silent on applications by Seinye Lulu-Briggs, accusing a High Court Judge of bias and requesting that he recuse himself from the appeal she filed against the Coroner Court.

Listing several avalanches of cases won before courts of competent jurisdictions both in Nigeria and in Ghana, Mr. Sotonye Ijuye-Dagogo admitted that “We are however constrained to put the facts straight in the latest distraction from Seinye Lulu-Briggs and her cohorts. A Port Harcourt High Court presided over by Hon. Justice Nwogu, yesterday, Monday 14th December 2020 dismissed a suit brought before it by the heirs of the late High Chief O.B. Lulu-Briggs seeking to set aside the Probate granted in respect of a purported Will and Testament. The three oldest sons of High Chief O.B. Lulu-Briggs were compelled to bring the action in court because, after the death of their father, while they were still mourning their loss and their father’s mortal remains were in a morgue in Ghana, Seinye Lulu-Briggs, through her Solicitor, Mr. Charles Adeogun-Phillips delivered to the Probate Registrar documents alleged to be the Last Will and Testament of Chief Olu Benson Lulu-Briggs and six (6) codicils along with Notarial Certifications and Attestations of a Consultant Physician, and they were registered in the Register at the Probate Registry of the Court as No. 3112.

“Following this development, Chief Dumo Lulu-Briggs and his two brothers filed Suit No. PHC/2751/2019 against Seinye, the executors, probate registrar and others. The Suit seeks to set aside the probate granted… Seinye Lulu-Briggs filed an objection with respect to PHC2751/2019 on ground that it was an abuse of court process because at the time of filing it, Suit No. PHC2520/2019 was pending. Chief Dumo Lulu-Briggs and his brothers filed a Notice of Discontinuance with respect to the said PHC/2520/2019 and filed a motion to amend Suit No. PHC/2751/2019 seeking to introduce among other things the fact that at the time probate was granted with respect to the Will lodged by the widow through her lawyer, the Probate Registrar was in the custody of a Will lodged by the late Chief Lulu-Briggs himself. It is instructive that at the time of filing Suit No. PHC2751/2019. Chief Dumo Lulu-Briggs and his brothers did not know that their father, during his lifetime, had lodge a Will at the Probate Registry himself but became aware of this fact long after the filing of the suit; hence, the application to amend in order to properly put that fact before the court.

“On Monday, December 14, 2020 Hon. Justice Nwogu of the High Court of Rivers State dismissed the application for amendment and also dismissed Suit No. PHC275/2019 on the ground that it’s an abuse of court process because the Notice of Discontinue file with respect to Suit No. PHC2520/2019 was incompetent as the permission of the court was not obtained before same was filed. Justice Nwogu dismissed the application notwithstanding that the processes filed in the said suit were served on only 2 of the 6 defendants and none of the defendants entered an appearance or took any step whatsoever with respect to the suit. The High Court Judge disregarded the critical information regarding a Last Will and Testament, which High Chief O.B. Lulu-Briggs himself had deposited and which may contain provisions that contradict the one Seinye had paraded as the Last Will and Testament.

“By this ruling, the late High Chief O.B. Lulu-Briggs has been denied justice by the Port Harcourt High Court, because his real wishes contained in his proper Last Will and Testament have been ignored by the court. However, Chief Dumo Lulu-Briggs cannot allow himself to be distracted from the immediate task of according his father the most befitting burial, considering that this ruling is by a court of first instance presided over by the well-known Justice Nwogu. The heirs of the late High Chief O.B. Lulu-Briggs shall utilize all the legal opportunities at their disposal while concentrating on the burial plans of their departed father and Paramount Head”.

As the surviving widow to the multi-Billionaire, Dr. (Mrs.) Seinye O.B Lulu-Briggs in her social media platform wrote “ Those who trust in the Lord are like Mount Zion, which cannot be moved but abides forever. Psalm 125: 1 ESV High Chief Dr. O. B. Lulu-Briggs, OON, DCF, DSSRS, my dearly beloved husband was an extremely accomplished man, by the grace of God. Perhaps he is best known for his love of humanity, exemplified by his legendary charitable and philanthropic giving which began long before he became a revered National elder statesman. Indeed, since he passed into glory in Accra, Ghana on December 27, 2018, many more of his acts of kindness and generosity have come to light. None of this comes as a surprise to us, he was first and foremost a man of faith whose life was built on the foundation of trust, obedience and love of God. We fondly remember how this shone through daily in so many ways, including in his boundless optimism, fearlessness, fairness, forbearance, fortitude, focus and firmness. He often shared testimonies of how God’s word never failed him ever, summarizing his many victories with a favorite bible verse: Hebrews 13: 8 Jesus Christ is the same yesterday and today and forever. ESV What a blessing and a joy to have had him as our doting patriarch and to have been able to learn from his wisdom. Isaiah 43: 19 “Behold, I am doing a new thing; now it springs forth, do you not perceive it? I will make a way in the wilderness and rivers in the desert.” ESV God is still doing unprecedented things even now. My hope in Jesus is assured. He has turned the many challenges including the non-burial of my beloved husband who died 22 months ago into opportunities to spread the hope of Jesus Christ.”

The question on the lips of many Rivers State residents remains when will the family come together and give their patriarch a befitting burial rite after 3-years of his death despite several peace interventions by former President Olusegun Obasanjo, Governor Nyesom Ezenwo Wike and other high valued personalities?