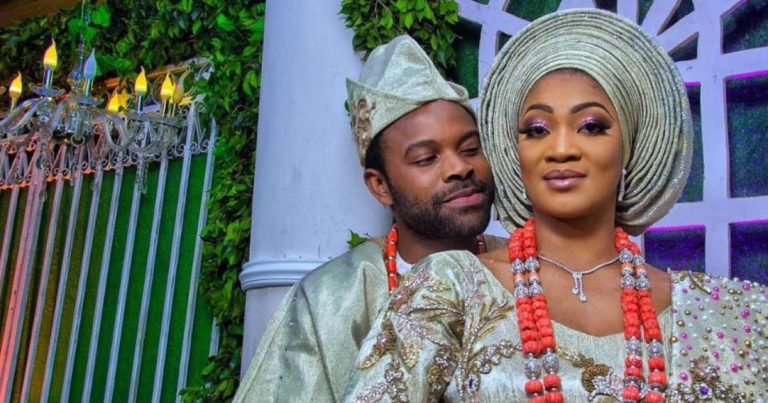 Gabriel Afolayan is a multi-award-winning actor and singer. His stage name as a singer is G-fresh. He is the son of one of the pioneers of the Movie industry, – Mr Adeyemi Afolayan, popularly known as Adelove.

He hails from Kwara State, in the  Irepodun Local Government Area. Gabriel was born in the early ’80s at Island Maternity, Lagos Island, but he grew up in Ibadan. He had his basic, elementary, and university education in Ibadan.

The talented actor commenced his acting career in 1990, with the movie – Fopawon – a Baba Sala movie. He came into limelight with the movie, Madam Dearest by Tade Ogidan, and the popular TV series – Super Story by Wale Adenuga. Since then, he has featured in several hit movies and has received numerous awards and nominations.

Gabriel Afolayan had always had a thing for music and was a member of his church choir. His love and appreciation for music have been his driving force through his musical career. In 1997, Gabriel became a backup singer at the Phoenix Studio, Ibadan.

His studio, Studio6 is a multimedia limited liability company, established in 2010 to represent the Gabriel Afolayan Brand. The company aims to influence the world through quality media content. Studio6 provides the following services: film production, music production, label management, television advertising, and programming, radio advertising, and programming. The company is also involved in the sales of media-related equipment.

Recently, his marriage to beautiful Adebanke Afolayan was rumored to have crashed, but Gabriel, in this interview with City People Assistant Editor, SUNDAY ADIGUN, says his marriage is intact and also spoke about his career and the success story of the Afolayan dynasty. Below are the excerpts of the interview.

Congratulation you on your birthday. How was it. What came to your mind on that day?

It’s a good feeling, celebrating another year. What else can a man do than to give thanks to God. It feels good. It’s an honour, to still be alive.

How has it been keeping your relevance in the movie industry?

It’s work, for the fact that they celebrate us, it’s the dividend of the hard work.

For me it’s like asking somebody, how has your working experience been so, far?

So it’s hard work all the way, and I am thankful for everything and at the same time the ability and the grace to wake up every day and still do what you know how to do best. In our kind of job, there is no retirement age until you are physically tired until your body says you are not okay for this anymore. And I keep saying it to people what you owe this industry is to be good at what you do, because no matter what, even if you back down or go somewhere else, or you say you want to take a break if you are back you are back. So, there is no ending to the process. A new era of actors will come, another era will go.

Talking about era, you have remained consistent, what is the secret?

I am saying that in relation to the job itself, the structure of the job. It is such a huge industry where people come and go, which is the natural law of everything, unlike if you are in a bank and they will say after 30 years you are due to leave but this our job, its until you are practically tired. And as for me there is no secret, like I said what you owe this industry is to be good at what you do. If you know your job, you will get a phone call, that’s it for me.

Let’s talk about your delivery in your new movie “Alubarika”. How did you come about the role in the first place?

I was attracted to the story. The story was awesome duly written by Yewande Best.

The minute I read the script I was attracted to it and that is how I work anyway, because I always love to see myself in a character’s shoes because the moment you judge a character you can’t play that particular character as an actor. So I didn’t judge whatever was happening in the whole story, I just felt connected to it, and I just said this probably will be a good time to show people, to teach, to sensitize people, to let them know that there is something that is beyond human reasoning and eye. And the movie tells a lot on mystery, what happens in the spiritual that a whole happen in that spiritual that a whole lot of us can’t see with our naked eyes and you would have made that decision, doing things wrong before it now backfires or tells on your whole life. So, it was the script. The script was really good.

How did you come about the concept of singing different classical songs we saw you doing recently?

It’s a cover. There is an adage that says it’s from how you handle people’s jobs that you will get to know how you will handle your own job. That’s why you have all these talent hunt shows and they will give people music to perform, just to test, okay do you really know music?

These are your antecedents, these are your earlier artists in the game. If you are able to translate or communicate their song well, definitely when you are bringing your own original composition people will always accept it. They will know that it is not just stepping out to sing a song, you actually know music, that’s the whole idea. It’s a cover, just to have fun with cover of people musics, let people see entertainment through other people’s materials. On the day of my birthday I dropped a new album, so all these are in preparation to say, oh, he is an actor and he is also into music. Though I have been in the music as long as I can think of. I practically know a whole lot of people in the music industry even more than the film industry and that’s the truth, but you know all these things won’t play out till you are practically up there.

Which one do you actually love most, acting or singing?

It’s all entertainment, why? Because as a singer you are also a storyteller. If you watch musical videos, you will see them acting in it, singing a song is acting. So, it’s entertainment that has close contact and if you have the gift, you have it.

It’s not a matter of I love this more than this or this makes me feel good.

I am just given to entertainment, so whatever I do in there is what I can do. I love entertainment, I have passion for it. I am just gifted to be able to do both, and I am not trying to shy away from that gift. Another thing is to be constricted by society. I grew up with the gift. Entertainment is a calling. As an entertainer you are doing God’s work, we are a preacher, we influence, we do all sorts. Some people live life through us. That’s why I am an advocate of good stories. If you are treating a story make sure you do things that will inspire people, don’t give them wrong opinion about stuffs; till tomorrow some people still believe devil lives underground because of what they have seen in the movies.

So, the calling is entertainment. In entertainment you can have more than one gift, you can have more than 2, even more than 3, it all depends. Many directors are good musicians too. Some of them are good make-up artists, some of them are good at custume designing if it is a gift it’s a gift, if it’s not, you will know. My first single was out in 2010/2011, so I have been around doing both acts for a while, so it’s not about which do I love most. It has time factor, once I feel like music I do music, once it’s acting time I go for it.

Let’s talk about the Afolayan dynasty. As one of the flagbearers, how has it been, keeping the legacies?

That is why I said, if it’s about the legacy we probably won’t be here today. This is to show you that there is a natural gift too. It’s not about just upholding the family legacy, it’s about who we are too, as artists, and coming from that legacy helps more. It’s like solidifying things to make it last longer. If we were not in the movie industry, there is nothing that will happen to the legacy. If we are not committed to our own course as well, the legacy will just be there. For a legacy to last longer in a dynasty says a lot about the gift that the flagbearers have as well.

But I heard you guys are not too close?

If we are not close you won’t be seeing things happening. We are close, we just do things at different levels. Like my brother, he is a big time filmmaker, he has gone far and wide with movies, I stick to my own acts too. Acting and music. It’s just recently I directed my own movie, my own movie; written and directed by myself. There is an antecedent to everything. We are not of the same age, we actually got into the industry at different point in time. So, our success in our journey as a different entity will definitely be different. It would have been different if we started at the same time, but everybody started differently. It was my sister first, then my brother before myself and some other ones growing up still want to come. So, there is unity, I was in his last movie “Citation” my sister was with me on my own set too, so, the connection is there.

I also heard your marriage is broken, do you want us to talk about it?

That’s actually personal to me. I really don’t want my personal life out there; I always keep that out of the media not because of anything but it is just a personal principle for me. Nevertheless, my marriage is very much intact.

Yes, I heard about the rumours too, but you know, there is no marriage that doesn’t have it’s own challenges, but we have settled it. My wife just travelled out of the country, and we are very much okay. Just because I didn’t say anything or make it go viral for those looking for sensational stories, they think otherwise. But my marriage is intact.