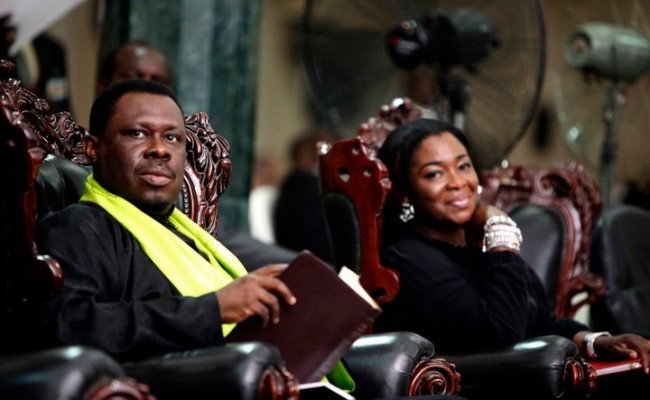 In Nigeria today it is believed by many that one of the easiest ventures to go into is setting up a church. To the larger public, it is a guaranteed source of livelihood. The thinking is that you can’t go wrong with it once you know your way around it. But those who know will tell you it’s not as easy as it looks. Yes, many churches are springing up every day but hundreds of them also fold up every now and then because their foundations lack sincerity and God’s endorsement. This explains why many of the churches that were founded on truth and genuine calling have stood the test of time. Many of them have been in operations for decades and still counting. Unlike hundreds of other churches that are folding up by the day, these ones have continued to flourish with their membership increasing at an astronomical rate. One of such flourishing churches is Victorious Army Ministries founded by Reverend Joseph and wife, Blessing Agboli.

VAM as the church is popularly called began with a small congregation in 1995 right inside Reverend Joseph Agboli’s apartment in Opebi, Ikeja with just about 70 people. As a matter of fact, a little over 70 people had stormed his home unannounced one Sunday morning after a night vigil had been held there. That Sunday morning, they had all left their various homes to come for a church service at Pastor Agboli’s place.

According to them, they had been led by the Holy Spirit to go to his house for church service. Today, with its headquarter located along ACME road, Ogba, Ikeja, the ministry boasts of a congregation of over 50,000 members. And commensurate with its growth, Victorious Army Ministries has impacted positively on its members and the society at large. VAM believes passionately in taking care of its people by way of empowering them, and it focuses particularly the needy.

It has packages to help reduce the burden of survival on the aged and widows. Beyond offering financial assistance to those who are in need, the church also helps its teeming young population unlock their potentials. There is no doubt that VAM, today, is not only one of the most popular and respected churches in the land, it is also regarded as one of the richest in terms of assets.

For instance, not many know that VAM is working hard towards owning its own private university. It is estimated that, upon completion, the university would have gulped about N13 billion. Expectedly, because Rev. Agboli and his wife are a couple with a taste for high standards, the university will be world-class. They are also building secondary schools, something they are hoping they can replicate and take to several parts of the country.

Another area the church is focussing on is the health sector. A multibillion naira hospital project is in the works and would be unveiled soon. We hear the hospital project is the initiative of Pastor (Mrs.) Blessing Agboli and plans are underway to bring in foreign health consultants to run the hospital with some of the most skilled Nigerian medical experts.

The church is also believed to have properties scattered around Ogba and beyond running into billions of naira. Those who know say that the credit for the church’s strong, investments in business should go to the adorable wife of the founder, Pastor (Mrs) Agboli. She, it is believed, is responsible for the church’s deliberate expansion in terms of business and investment. She has always been a businesswoman long before she met her husband. Although she is a Lawyer by training, her incredible success in business is enviable. One of her biggest investments is her Real Estate Firm based in California, USA. She has been running the outfit for decades and it’s growing bigger every passing year. If truth be told, this stunningly beautiful and fashionable virtuous woman has got the Midas touch. Whatever she puts her hands on instantly turns to gold. Meeting her for the first time, you will certainly be impressed by her warmth and magnetic aura. If you had your reservations about her personality and approached her with an already biased mind-set, her enchanting smile and impeccable character would certainly disarm you. This is why her husband loves her dearly and does not joke with her. This is also why Pastor (Mrs.) Agboli is hugely loved and respected by all the members of the church. The female members, especially, adore her to no end. She represents perhaps everything they aspire for in life. She has a fantastic marriage, blessed with wonderful and brilliant children and has been an excellent partner, helping her husband run one of the fastest-growing churches in the country.

And, may we add that she is also an absolutely gorgeous woman who has not allowed ageing to dampen her incredible beauty. She goes for nothing short of quality fabrics. Everything she wears suits her perfectly and she constantly tells anyone who cares to listen that she owes no one any apologies for being born beautiful and blessed financially. Without a doubt, they make a perfect couple, one that every young couple would aspire to be like both in terms of substance, wealth and above all spirituality.